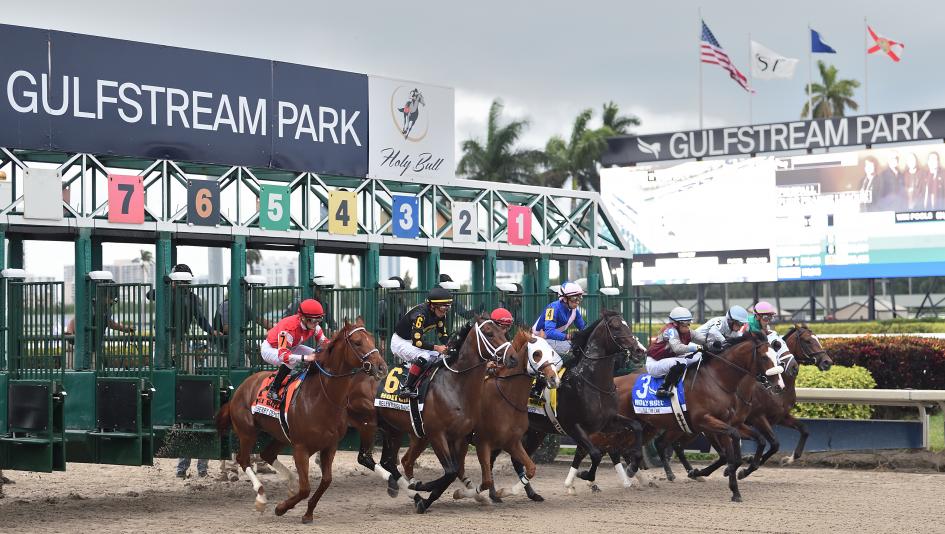 One of the top names coming into the race is Shadwell Stable’s Mutasaabeq, who was the 1 1/2-length winner of the one-mile Mucho Macho Man on Jan. 2. That race marked the colt’s return to dirt.

Mutasaabeg is the son of Into Mischief with Hall of Famer Todd Pletcher as his trainer. He is also returning to the main track following a victory in the 1 1/16-mile Bourbon (G2) on grass, as well as a 10th-place run in the Breeders’ Cup Juvenile Turf (G1).

Mutasaabeq has a career record consisting of three wins and one third-place finish from five starts, and his total earnings sit at $259,120.

He will be up against Todd Pletcher stablemate Prime Factor. The 3-year-old Quality Road colt is owned by CHC INC. and WinStar Farm.

Prime Factor broke his maiden in a Dec. 12 Gulfstream Park race going six furlongs. He crossed the line 8 3/4 lengths ahead of the runner-up finisher.

Mutasaabeq’s current Kentucky Derby odds are at +4000 while Prime Factor is at +2500.

Two of the other big names to look out for going into the Holy Bull Stakes are Greatest Honour and Sittin On Go.

Courtlandt Farms’ Greatest Honour is a 3-year-old Tapit colt who is trained by Claude McGaughey. He has a career record of one win, one second, and two thirds from four races.

He is coming off a maiden victory on Dec. 26 over a mile at Gulfstream Park, where he registered a 104 Speed Figure. His three other races were all maiden special weight events. Those were a runner-up finish on Nov. 8 at Aqueduct, a third on Oct. 11 at Belmont Park, and a third on Sept. 5 at Saratoga.

Albaugh Family Stables’ Sitting On Go has been receiving a lot of attention lately, and he is +10000 on the Kentucky Derby odds.

Trained by Dale Romans, the 3-year-old Broody’s Cause colt has two wins from his four career starts, and his earnings are at $167,520.

The colt has not run since Nov. 28, when he took sixth in the Kentucky Jockey Club Stakes (G2) at Churchill Downs. His other performances include a ninth-place finish in the Nov. 6 TVG Breeders’ Cup Juvenile presented by Thoroughbred Aftercare Alliance (G1) at Keeneland.

He was also first in the Sept. 5 Iroquois Stakes presented by Ford (G3) at Churchill Downs and had a maiden victory on Aug. 16 at Ellis Park.

Twenty-two total sophomores are nominated to the Holy Bull Stakes, including names like Papetu, Awesome Gerry, Pickin’ Time, and Ultimate Badger. Those happen to be the four horses that finished behind Mutasaabeq in the Mucho Macho Man.

It is setting up to be an exciting race on the road to the Florida Derby.