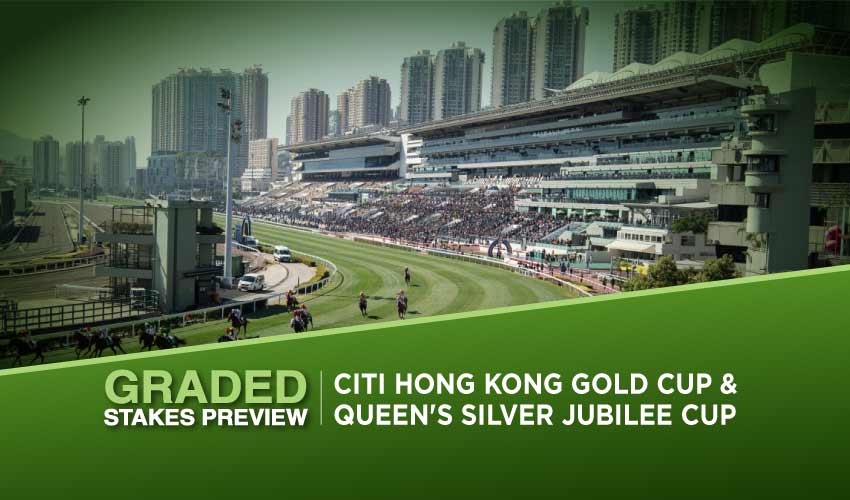 Sunday’s card at the Hong Kong racecourse Sha Tin features two G1 races with outstanding line-ups. After clashing in the Stewards’ Cup, here Waikuku surprisingly bettered phenomenal performer Golden Sixty, their journeys separate, and they head each into a different event, both attempting to win their respective aims for the second time.

Waikuku scored last year’s Queen’s Silver Jubilee Cup, and as he showed in January, he’s in great form and could win again, but awesome sprinters Sky Field and Wellington could be against it. Especially the former who scored the G1 Hong Kong Sprint in December.

Six-year-old Golden Sixty will try to become a back-to-back winner of the Hong Kong Gold Cup over a mile and a quarter, and if he’s a bit more fortunate than last time, he should bag it easily.

The first of a couple of Sunday’s G1 races is held at the distance of seven furlongs on the turf surface. The purse of HK$12,000,000 attracted a field of eight four-year-old and older horses, including last year’s winner, seven-year-old Waikuku.

The John Size trained gelding has been a joy for the connections as he’s bagged victories in many prestigious handicaps, collected places among the elite, and scored three G1 triumphs. After taking the Steward’s Cup in 2020, he seized the win in the Queen’s Silver Jubilee Cup 2021. Even though he faced phenomenal Golden Sixty in January’s Stewards’ Cup, Waikuku denied the odds and won the event for the second time.

Indeed, Golden Sixty had a terrible trip back then, and Waikuku was just where he needed to be to score it, but he deserved some credit, considering he became the only horse beating Golden Sixty in seventeen outings. It’s necessary to add, though, that Waikuku doesn’t belong to the most consistent horses as he usually performs impressively at one occasion and then fails to even snatch a place next time out, so he’s respected for Sunday’s race, still, Sky Field is surely one the veteran should fear.

The five-year-old gelding trained by Caspar Fownes didn’t look like a Graded runner until spring 2021, when he finished third in the G1 Chairman’s Sprint Prize, after which he won his premiere G3 race and seemed to be a G1 winner in the making. Still, he bumped into such a tough competition in the G1 Hong Kong Sprint that taking place would be a big deal for him; however, the race unfolded as it did, Sky Field remained unscathed by the collision, and went on to bag his first G1 triumph.

The chestnut then had every chance to bag also January’s Centenary Sprint Cup, yet got headed by Stronger. On Sunday, he could return to the winning ways because he definitely looks capable of it, while moving from six furlongs to seven shouldn’t be a big deal for him.

Five-year-old Wellington ran in fourth in the Centenary Sprint Cup, and similarly as Sky Field, he’s been usually pointed towards shorter events. In April 2021, he scored the G1 Chairman’s Sprint Prize but failed to deliver during his autumn outings, but truth to be told, he faced a severe room shortage in the Centenary Sprint Cup and basically couldn’t get better than the mentioned fourth place.

Under different circumstances, he is not much worse than Sky Field, but as he usually runs in the midfield, he might face the same difficulties again, while Sky Field prefers finishing from the extreme outside.

Our betting pick for the Queen’s Silver Jubilee Cup is :

Sky Field because he’s classy, absolutely willing to show off his turn-off-foot, and the longer distance even could prove more suitable for his last-to-first running style.

The second G1 race of the day offers the purse of HK$12,000,000, while the field of 11 four-year-old and older horses will cover the distance of a mile and a quarter. On the turf surface, Golden Sixty is the leading chance without a hint of the doubt despite his recent loss in the Stewards’ Cup. After bagging 16 victories in a row, the six-year-old gelding ran out of luck when employing his late-running tactic and was just too distant from leading Waikuku to better him in the closing stages.

The K W Lui’s trainee had to settle for second; however, it doesn’t mean he’s done with winning because Golden Sixty will attempt seizing the Hong Kong Gold Cup prize for the second consecutive year, adding sixth G1 triumph to his record. Although he’s getting older, and he might prefer Sunday’s distance to a mile, his victories at a mile and a quarter were the narrowest he achieved. Still, regarding his Sunday’s rivals, he should be able to leave every single one of them behind.

More Than This looks to be the best of the rest, given he finished second behind Golden Sixty on two occasions, including the Hong Kong Mile during the International Meeting at the Sha Tin Racecourse.

In April 2021, he was just headed by the favourite in the FWD Champions Mile; however, it can’t be said that switching to a longer distance should go in his stride, or even help him finally beat Golden Sixty. More Than This is a place contender here together with Russian Emperor, who struggled among the Hong Kong elite until winter when he recorded two third places in the G1.

At first, he ran a good race in the Hong Kong Cup behind Loves Only You and then took third in the Stewards’ Cup behind Waikuku and Golden Sixty. He should be capable of snatching the same spot on Sunday, too. The rest of the field features horses that met in the G3 Centenary Vase handicap, which Zebrowski won when carrying low weight, bettering more carrying Tourbillon Diamond in fourth.

Our top pick for the Hong Kong Gold Cup is:

Golden Sixty because he’s a champion who shouldn’t be stopped in his glorious endeavour by one unfortunate loss.