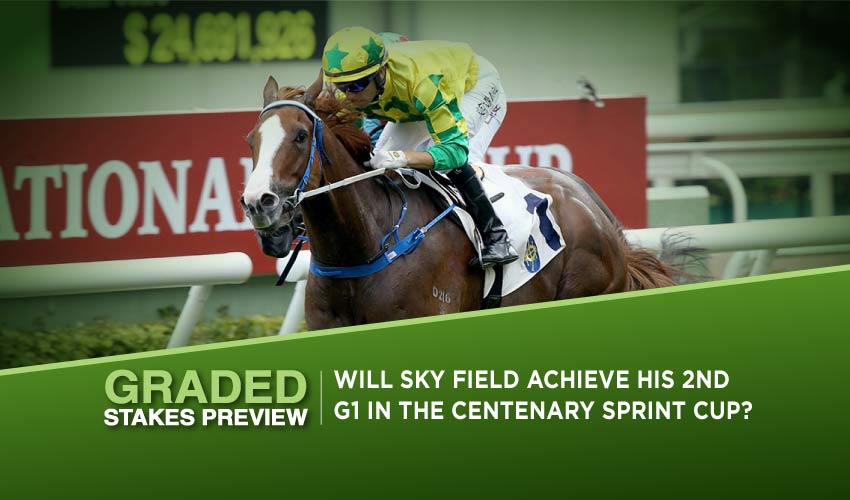 The G1 action returns to Hong Kong in the second half of January, and there’s certainly a lot to look forward to. On Sunday, great sprinters will meet in the Centenary Sprint Cup as the G1 Hong Kong Sprint winner Sky Field attempt to achieve his second G1 victory, upon which Golden Sixty looks primed to prolong his unbeaten record in the Stewards’ Cup. Both races are meant for four-year-old and older horses.

42 days after clashing in the Hong King Sprint, six of its participants will meet up again at the G1 scene at the distance of six furlongs. The purse of HK$10,000,000 is up for grabs on the turf surface, while it was five-year-old Sky Field (3-1) who took the spoils in December.

The race was marred by a collision in the final turn, resulting in fatal injuries and lost chances for other contestants; however, Sky Field piloted by Blake Shinn, stayed unscathed by the accident and secured his first G1 victory by ¾ of a length in front of Japanese Resistencia.

Although it could be argued the race was far from a standard one, and without the collision, Sky Field wouldn’t have succeeded at Sha Tin, the Caspar Fownes gelding won, bettered four of his seven Sunday’s rivals, and surely deserves to be respected. Four-year-old Courier Wonder looked an interesting horse even in the Hong Kong Sprint, having a G3 victory under his belt, and despite the fact he didn’t fulfil the role of a favorite in his subsequent outings, finishing third in December seemed quite a natural step up in his expected progress.

On Sunday, he should continue in that; however, he’s probably about to be considerably more preferred than Sky Field due to recent results of his connections in the Centenary Sprint Cup.

His trainer John Size has won the race four times in a row, while Joao Moreira was aboard the winner three times, leading home Beat the Clock twice and Hot King Prawn in 2021. Still, Courier Wonder was getting tired in the final stage, while Sky Field was going fast, and the mentioned veteran Hot King Prawn didn’t look finished as well.

Although he’s a seven-year-old, he took fourth place in December, and as the Centenary Sprint Cup often favours back-to-back winners, the popular grey shouldn’t be overlooked here. There’s still something about him, and he definitely can do the job again.

Another of the participants who met in December is five-year-old Stronger , who crossed the wire in fifth. He belongs among such a company, but he usually bumps into somebody slightly or significantly better on his race days, which seems to be the case once again. In other words, he won’t surprise anybody by running in a close second as well as finishing down the field.

Wellington didn’t shine in the Hong Kong Sprint, but his disappointing run should be attributed to the collision in the final turn as the falling horses hampered him. Under everyday circumstances, Wellington should be considered a place contender, unlike sixth in December, Computer Patch , who is an outsider here.

Master Eight is more from for the remaining duo that bypassed the Hong Kong Sprint due to his short career, consisting of five starts and five victories. Last time out, he struck gold in the G3 company in front of Super Wealthy, yet it happened at the distance of five furlongs. If he handles 6 furlongs, he could be a major player.

Our betting pick in this hugely competitive field of the Centenary Sprint Sup is Sky Field, who caught our eyes last time out; still, Hot King Prawn shouldn’t be overlooked as well.

Unlike the previous race, this HK$12,000,000 G1 turf race held at the distance of a mile looks like a certain matter for six-year-old Golden Sixty. Trained by K W Lui, the gelding has run 20 times and recorded just a single defeat in 2019. Since then, he’s been perfect and bagged five G1 victories at the Sha Tin Track, including two strikes in the Hong Kong Mile and success in last year’s Hong Kong Stewards’ Cup in front of great Southern Legend.

Although Golden Sixty’s running tactics are quite stressful for the spectators as he usually gallops at the rear of the field, upon which he relies on his powerful turn-of-foot and manages to just win by not huge margins, the son of Medaglia D’Oro always seems to have everything under control, so if nothing extraordinarily happens on Sunday, he should win again. Under Vincent Ho, he’s simply expected to deliver.

Regarding his six rivals, More Than This looks the most appealing one after his fine effort in the Hong Kong Mile, resulting in taking second place. He was only sixth in the Stewards’ Cup 2021, and he has his weaker moments, but More Than This usually gets his job done and places not far away from the winner. Seven-year-old Waikuku belongs among respected veterans in Hong Kong as not only he scored the Stewards’ Cup in 2020, but he also bagged the Queen’s Silver Jubilee Cup in February 2021.

Although his form has deteriorated since, he should place on Sunday, which should also be expected of Sky Darci, who is unreliable yet capable of fine efforts. The last to mention is Russian Emperor, trained by Douglas White, who ran the Epsom Derby in 2020. Subsequently, he was relocated to Hong Kong, where he didn’t shine at all; however, his third place in the Hong Kong Cup suggested he hasn’t said his final words at Sha Tin. Still, he’s always looked like a horse for middle or long distances, so shortening him to a mile raises questions.

Our top pick for the Stewards’ Cup couldn’t be anybody else but Golden Sixty. In terms of places, we’d go with More Than This or Russian Emperor.

Don’t forget to check our Horse racing odds, racing entries and races results. Sign up to get our daily horse racing news.