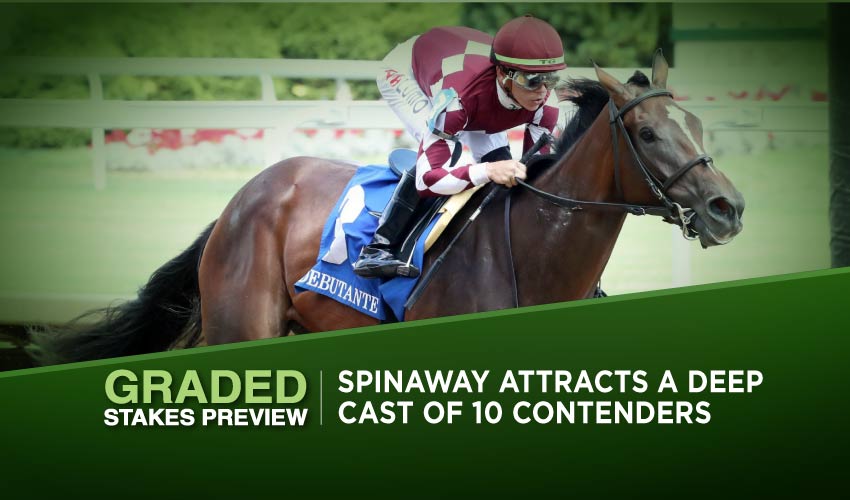 Summer must be over, because the wonderful Saratoga meet is drawing to a close, signing off for the year with two G1s for two-year-olds. Stakes-winners Wonder Wheel, Naughty Gal and Just Cindy lead the pack in the Spinaway on Saturday, and 24 hours later promising colts Gulfport, Mo Strike and Blazing Sevens get their chance in the Hopeful.

Major two-year-old races at this time of year are a rich blend of reputation and potential, solid maiden scores and promising stakes performances, and the Spinaway, the main attraction at Saratoga on Sunday, follows the pattern to a tee.

On paper there’s no standout, and the chosen one at the head of the morning-line is Wonder Wheel, whose trainer Mark Casse has won this twice in the last six years. Wonder Wheel, unbeaten in two, gets her credit from a romping stakes success at Churchill Downs over six furlongs, when she led throughout and drew off to beat the late-closing Sabra Tuff by six and three-quarter lengths.

It’s a similar profile to Just Cindy, also unbeaten in two and winner of the G3 Schuylerville over six furlongs here in July, when she cruised into the race and kept rolling to win by two and a quarter lengths.

In the same boat is Naughty Gal, who went gate-to-wire to win the G3 Adirondack here over six and a half furlongs last month, keeping on well through the closing stages. Sabra Tuff was third, beaten two and three-quarter lengths, and Apple Picker was another eight lengths back in fourth. At this stage of a horse’s career, Graded form and stakes form are practically interchangeable – and maiden form can be better than both.

Take Kaling, comfortable winner of a six-furlong maiden here on debut for Todd Pletcher, who has won the Spinaway six times. She’s ready to move up, although she drew the rail and that may be a disadvantage.

There’s also American Rockette, a half-sister to G2 winner Frank’s Rockette and another Spa maiden winner on debut. She did it all late over five and a half furlongs and should appreciate stretching out, while fellow Spa maiden debut winner Leave No Trace had her race won by mid-stretch and was dialled down late on. The move up to seven from five and a half should be within her grasp.

A wide-open contest with a mix of Graded and maiden form. KALING impressed on her debut and can make the leap into the big league.

A tighter, but just as accomplished, field goes to the gate for the Hopeful, the colts’ equivalent and Monday’s final-day highlight of the Saratoga meet.

Steve Asmussen has won the Hopeful the last three years running and relies on Gulfport, who was a very heavy favourite for the G2 Saratoga Special over six and a half furlongs last month but had a difficult trip, and could manage only runner-up behind the exciting Damon’s Mound. He had earlier blitzed a Churchill Downs stakes by more than 12 lengths and connections are confident that he will show that side of him today.

He will face stiff opposition from the unbeaten Mo Strike, who sprang a mild surprise when clearing away in the closing stages to win the G3 Sanford, here over six furlongs, by an impressive three and a half lengths. Back in fourth that day was the favourite Forte, wide-margin winner of a Belmont Park maiden, who could never get competitive.

Bourbon Bash’s trainer Wayne Lukas has won the Hopeful a record eight times during his incredible career and also sends out Western Ghent, who took four attempts to shed his maiden tag – getting it done by a head in claiming grade at this track – and could now be out of his depth.

** Odds will be updated soon**

The two Graded winners bring strong form, but BLAZING SEVENS was hugely impressive on debut and is the choice to strike again.

Only one of the half-dozen runners in a weak-looking Bernard Baruch has previously won at this level, with the highweight City Man the horse in question.

That victory came last time out in the G3 Forbidden Apple here over a mile, in which City Man rolled clear to beat a much better field than this by two and three-quarter lengths, and given his fine record at the Spa – four-for-seven, and only once off the board – he has excellent credentials against these rivals.

Tom Morley trained the winner of this race last year and is doubly represented, with recent course-and-distance stakes winner Dynadrive preferred to Ocala Dream, who has run two poor races since winning a stakes at Belmont Park in May.

Another trainer with two in the gate is meet leader Chad Brown, who will be keen to go out on a high. His old-timer Emaraaty bounced back to winning form in an allowance optional claimer here over a mile last month, but more interesting is barnmate Mouillage, a stakes winner in France and beaten only by G1-placed Mira Mission on his US debut in the G3 Canadian Turf at Gulfstream Park in March.

The layoff is never an issue with Brown’s runners, but it may be for Winters Back, who reappears after more than 13 months on the sidelines and may be a little ring-rusty.

** Odds will be updated soon**

Chad Brown’s pair have claims but CITY MAN is the class of the race and is taken to improve his already excellent record at this track.

Follow us on Social Media for more Spinaway & Saratoga updates!