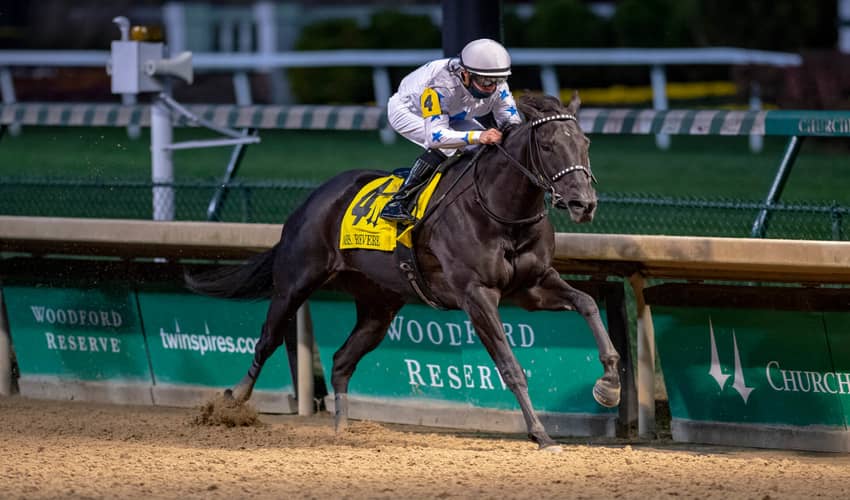 Horse Racing Results: The weekend after the Breeders’ Cup Championships is generally a fairly slow one, and 2020 was no exception, as Churchill Downs hosted the Mrs. Revere (Grade III) stakes on Saturday. This marked the 30th edition of this event, and Princess Grace pulled away around the far turn, pushing by Positive Danger, and then held off Pass the Plate down the stretch to win by 2 ¾ lengths.

Let’s take a closer look at Saturday’s race, but before we go on with our report, check out some of the hottest Horses Betting Futures currently available at JazzSports.ag

Reviewing the horse racing results from the Mrs. Revere Stakes, we see that Princess Grace completed the 1 1/16 miles in 1:44.00 on a fast track to win her first stakes race. Florent Geroux was on board Princess Grace, who is trained by Mike Stidham.

Normally, the Mrs. Revere Stakes is a turf race, but the race was moved to the main track at Churchill Downs because the turf there is having difficulty in the fall weather. The American Graded Stakes Committee reduced the race, normally a Grade II stakes, to a Grade III, as a result.

Princess Grace had finished a half-length behind Stunning Sky at the Valley View (Grade III) Stakes at Keeneland (a turf race) but came through this time. She was the +250 second betting choice in what became a field of fillies in their third year.

Positive Danger started as the pacesetter, with the first two fractions at :24.54 and :49.68, but Princess Grace was breathing down her neck. When Princess Grace took charge midway through the far turn, she hit six furlongs in 1:13.84. In the stretch, she led by as many as three lengths before Pass the Plate started a thunderous rally. However, Princess Grace was able to hold off the attack.

In an interview after the race, Geroux said, “The pace unfolded exactly how I thought that [Positive Danger] would go to the lead and we could sit just to her outside.” Geroux also won the Mrs. Revere in 2017, aboard Lovely Bernadette.

Pass the Plate finished as the runner-up, paying $5 and $3.20, and then How Ironic came in third, paying $3.80 to show. Stunning Sky, who was the favorite at +150, came in fourth. Witez and Positive Danger rounded out the order of finish, with Hendy Woods a late scratch.