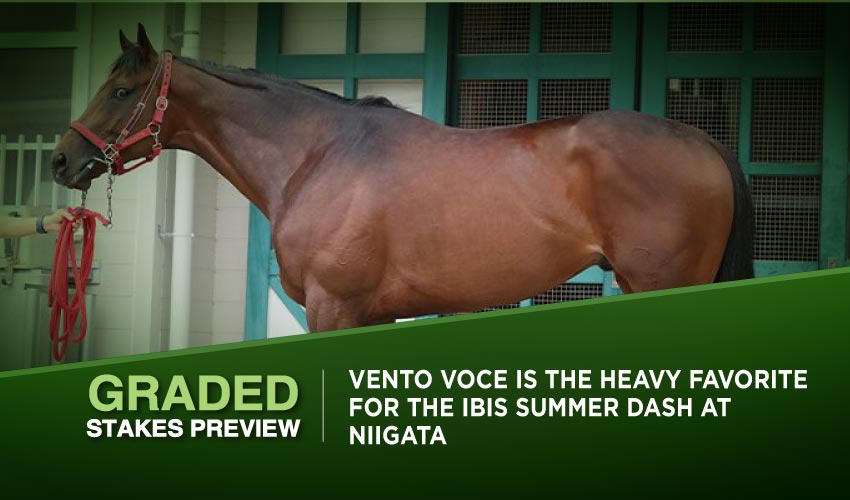 During the upcoming weekend, the Japanese tracks offer two G3 turf events. At the Sapporo Race Course, three-year-old and older fillies and mares will clash in the Queen Stakes, where such a star as Deidre once struck gold. In 2022, three-year-old Water Navillera could achieve her second G3 victory if she affirms to be class above the rest of the field. After all, she placed second in the Japanese 1000 Guineas.

The second G3 race to be held on Sunday is the Ibis Summer Dash – the only Japanese Graded race run over the straight track. The competitive field of eighteen horses promises a tough fight for victory.

The G3 turf race is open to three-year-old and older fillies and mares who are about to cover the distance of a mile and a furlong. The purse of 72,000,000 Yen lured in a field of fourteen participants, yet only one of them belongs among the lines of three-year-olds – Water Navillera.

The Koshiro Take bound bay has seven outings under her belt. In 2021, the daughter of Silver State bagged her debut, then went on to prevail at the Stakes scene, and also achieved her premiere G3 triumph. Subsequently, Water Navillera placed third in the G1 Hanshin Juvenile Fillies, while in 2022, she started with fifth place in a Classic trial, upon which she showed a great effort in the G1 Japanese 1000 Guineas as she finished second behind great Stars on Earth.

She sort of confirmed not to be a stayer in the Japanese Oaks where she was beaten by far; therefore, she should benefit from the shorter distance and the drop in the class this time. Moreover, as a three-year-old, she will carry a smaller weight than her rivals.

The only other contestant who recently delivered a satisfactory performance among the elite is Rosa Noir, a six-year-old mare trained by Masato Nishizono. She spent most of her career in smaller races, then achieved two Stakes victories and in 2021, she scored a Listed.

Last time out, though, she finished a decent fourth in the G1 Victoria Mile behind phenomenal Sodashi, with Meisho Mimosa being the dead last. Unlike Rosa Noir, Meisho Mimosa was respected for her previous effort in a G2 race in Hanshin, where she bettered smart Andvaranaut to bag her first Graded success.

Both these participants could play a role here, which applies to five-year-old Terzetto as well. The useful daughter of Deep Impact collected six victories between 2020 and 2021 but failed on each occasion she was pointed to the G1 company.

Although she was only fifth in her most recent G3 outing, she shouldn’t be overlooked in the Queen Stakes as she prevailed here in 2021 in front of Magic Castle and Satono Cecil, who could snatch up a place on Sunday, with the latter being seemingly in a better form. Terzetto is simply a solid G3 performer and looks like the most serious rival for Water Navillera.

Water Navillera, who managed to catch some attention in her 1000 run, while this race should go well into her stride.

The second G3 turf race of the weekend at the Japanese tracks is meant for three-year-old and older horses, vying for the purse of 77,300,000 Yen. Eighteen participants will cover the distance of five furlongs here, including two previous winners of the race.

Four-year-old filly All at Once succeeded in 2021 but hasn’t shown a similarly classy performance since. Thus, seven-year-old horse Lion Boss looks more appealing in this contention, given he not only prevailed in 2020 but also recorded a second place in the last year’s edition.

He seems like a specialist of this race; still, there are contestants who are in better form and have amassed some fine victories in their most recent outings. In terms of five-year-old mare Anuradhapura, trained by Kiyoshi Hagiwara, she hasn’t hit the track in the ongoing season but concluded the last one with a couple of Stakes victories.

The daughter of King Kamehameha has nine starts under her belt in total, transforming five of them into wins. Although she didn’t impress in any of her Graded attempts, she may draw on her Stakes triumphs here, have a good run, and maybe even strike gold.

Mountain Musume could be a victory candidate in this competitive field after her 2022 performances. The four-year-old filly will carry less than older participants; moreover, the Eiji Nakano bound runner seems to be quite progressive as until 2021, she wasn’t anything special as her outings in the Stakes company were lacklustre.

At the mentioned stage, she achieved her premiere success in October, while in 2022, Mountain Musume managed to place twice in Class 2, upon which she bagged two Stakes wins. She is capable of handling well the distance of five furlongs and could be ready to finally show well at the G3 level.

Five-year-old Vento Voce could also be a player because of his previous fine efforts in Stakes races; moreover, he performed solidly in the tougher competition. In April, he achieved his premiere Listed triumph, and even though he was only seventh in his G3 attempt, he bumped into some fierce rivals back then. This field seems less classy and Vento Voce might exploit the factor successfully.

Mountain Musume, who could continue her progress in the Sunday race; moreover, she is advantaged in terms of weight, and Mirco Demuro aboard is always a benefit.