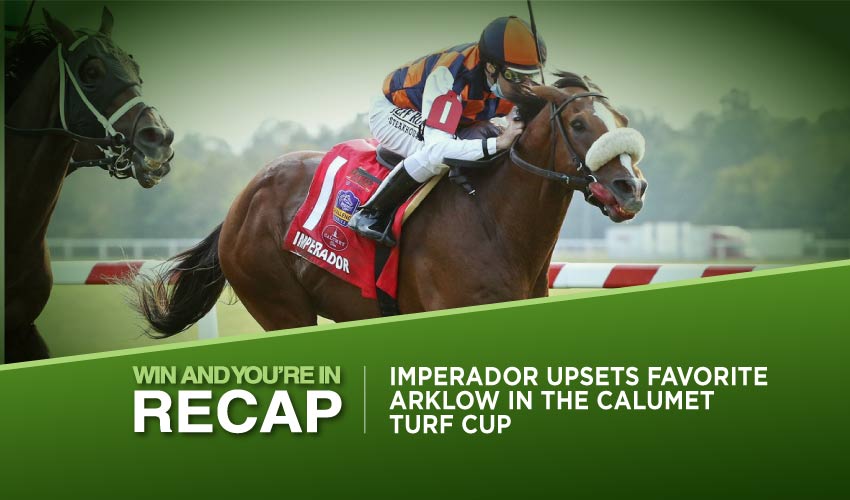 Very many good horses have come out of South America to make an impact on the US scene, and the latest is Imperador, who notched his first graded-stakes success in his adopted country in the feature event on the biggest day of the year at Kentucky Downs.

Imperador, winner of two Group 1s at San Isidro in Argentina, is an Argentine-bred and was therefore ineligible for a substantial chunk of the purse that was reserved for Kentucky-breds, but it’s not always just about the money, because this win-and-in contest for the Breeders’ Cup Turf now gives him a free shot at the big time.

Given a patient ride by Joe Talamo, who had him back of midfield as Epic Bromance and then Channel Cat set the fractions, Imperador came six horses wide on the home turn and hit the front with a quarter of a mile to run. He put away a solid challenge from Glynn County and then had to withstand a late rush from Arklow in the final strides, but he had just enough in the tank to get home by a neck in a course record time of 2:25.70, with a length and a quarterback to Glynn County in third. The payoff at the windows was $19.20.

The veteran Arklow, bidding for a third Turf Cup following victories in 2018 and last year, can be reckoned a slightly unlucky loser, as he had no room to work in mid-stretch and had to be pulled around horses to deliver a challenge.

“I had to take a hold and come around, and it was too late,” said a frustrated Florent Geroux. “The winner went all the way around. If I split horses and get through, they tell me it’s a great ride. I didn’t. I got squeezed, so it’s a bad ride.”

Imperador may have been a little lucky in that case, but the five-year-old whose name translates from the Portuguese as ‘Emperor’ was a legitimate contender after chasing home Tribhuvan in the Grade 1 United Nations at Monmouth Park in July. This was his first win since leaving Argentina, and Imperador was supplying his connections with their second success of the week at Kentucky Downs following the victory of In Love – who is hopefully not romantically inclined, being a gelding – in the Listed TVG Stakes three days earlier.

“In the Breeders’ Cup we are going to be in deeper waters, but I think this horse is peaking at the right time,” said trainer Paulo Lobo, who saddled Ivar to finish fourth in last year’s Breeders’ Cup Mile. “South American horses like Del Mar. I think he is going to enjoy it there.”

One horse who won’t be joining Imperador at the California festivities is the old-timer Zulu Alpha, who was scratched from the race he won in 2019 and has been retired. He won more than $2 million in purses, with his finest hour his victory in last year’s Grade 1 Pegasus World Cup Turf at Gulfstream Park.

The storied Calumet Farm was out of luck in the race it sponsored at Kentucky Downs when Channel Cat could finish only sixth, but half an hour earlier its black and gold colors had been in the winner’s circle thanks to homebred Gear Jockey, whose recent conversion to sprinting has proved an inspired move.

Gear Jockey has always been something of a work in progress. It took him nine races to break his maiden, finally clicking over a mile at Gulfstream Park in January, but since being dropped into speedball territory three starts ago he has never looked back. The son of Twirling Candy won an allowance optional claimer at Saratoga before finishing third in the Grade 3 Troy, also at the Spa, and this success in the Turf Sprint was the biggest of his career.

“He has thrived at sprinting,” trainer Rusty Arnold told the Blood-Horse. “I wish I had done it earlier, but it’s never too late.”

The four-year-old did it in style, too, turning what had seemed a very competitive contest into a one-horse show. He chased the brisk pace set by Bombard until locating overdrive at the top of the

stretch, swiftly opening up a two-length advantage for Jose Lezcano. Nothing came out of the pack to challenge and Gear Jockey motored on, hitting the wire two and a half lengths clear, stopping the clock in a new course record of 1:07.90.

“The whole way he gave me the feeling that I had so much horse,” said Lezcano. “When I asked him at the three-sixteenth pole he really kicked on.”

Diamond Oops came out best in a blanket finish for the places, nosing out Bombard for the runner-up spot. The favorite Got Stormy was a close-up sixth, and trainer Mark Casse indicated that she would step back up in distance for the Breeders’ Cup Mile.

“Things went the right way for him today. It was a huge effort. I’m proud of the way he showed up and today was the right day to show up,” said Arnold of Gear Jockey, who paid off at $13.40.

“Sometimes these things work out and sometimes they don’t. This time it did. We always liked him, but he looked like he was going to win a few races and he didn’t. He wasn’t finishing his races the way he was training for them. So we decided to sprint him and see what happened.”

What happens now is a trip to Del Mar on November 6, the Turf Sprint being a win-and-in for the Breeders’ Cup Sprint, and Gear Jockey will go straight there. He has been to the Cup before, taking third place in the 2019 Juvenile Turf over a mile, but now he’s twice as good for going three-quarters as far. Never too late, as Arnold says.

Follow us on Social Media for instant Imperador updates!