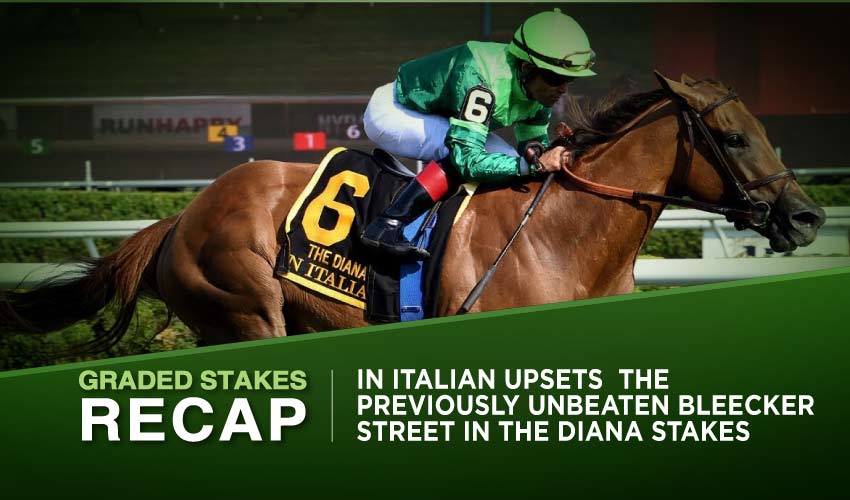 The 40-day meet at super Saratoga Racetrack started with a long weekend of high-quality action, capped on Saturday by the G1 2022 Diana Stakes, in which In Italian led home a remarkable Chad Brown 1-2-3-4. Christophe Clement was in fine form with a double courtesy of Big Invasion (G3 Quick Call) and City Man (G3 Forbidden Apple), while promising two-year-olds Mo Strike (G3 Sanford) and Just Cindy (G3 Schuylerville) took their first steps on the big stage. Read about In Italian victory here.

He just keeps coming. Big Invasion stretched his winning streak to five on his first start at Graded level when clearing away to win the Quick Call, Sunday’s highlight at Saratoga.

In a field reduced to six by late scratches, Big Invasion was kept well away from the blistering early fractions – 21.41 for the first quarter – by Joel Rosario before sweeping through to lead at the stretch call, and after that it was easy, the 4-5 favourite rolling in by two and three-quarter lengths from longshot Run Curtis Run. A half-length away in third was fellow longshot Surprise Boss; the time was a minute flat, just outside the course record.

“He’s a very good horse,” said trainer Christophe Clement. “He just keeps winning, and if there hadn’t been any pace he could have gone to the lead. He’s becoming more versatile as he matures.”

Now five-for-six, Big Invasion’s only defeat came on his debut when runner-up at Gulfstream Park. Next stop for the son of Declaration Of War could be the ungraded Mahony over this course and distance on August 14, with the $1 million G2 Turf Sprint at Kentucky Downs on September 10 as his main summer target.

The Diana – the highlight of the opening weekend at the Spa – had Chad Brown’s name all over it and the local hero took down the superfecta with his four runners, led home by In Italian, the outsider of the quartet, who made all to claim her first G1 win in track record time.

The four-year-old was always the speed in the race and the 8-1 shot just kept going under Joel Rosario, seeing off the tentative challenge of Technical Analysis to win by a comfortable length and a half, with the same margin back to the previously unbeaten Bleecker Street in third and Rougir a neck away fourth. The clock showed 1:45.06, 0.16 seconds faster than the old mark.

“I’m so lucky to have so many great horses in this division,” said Brown, winning his seventh Diana, another record, and his sixth in the last seven years. “This [the 1-2-3-4] is a feat I’ll always remember.”

In Italian, four-for-seven lifetime, will now have a break before being pointed towards the G1 First Lady at Keeneland Racecourse over a mile on October 8.

Such a sweet Strike

Once upon a time the Sanford was won by Secretariat and Affirmed, and Mo Strike took his first step along what might one day be the same road when retaining his unbeaten record with a dominant display.

The Brad Cox-trained colt pressed the pace before moving to the lead in mid-stretch, the 8-1 chance turning back the threat of second-choice Andiamo A Firenze and drawing off in the closing stages to win by an impressive three and a half lengths, stopping the clock in 1:11 and two-fifths. Great Navigator rallied to claim the silver medal by a neck from Andiamo A Firenze, with favourite Forte fourth.

“He broke sharp,” said jockey Florent Geroux. “When the other horse came to me down the lane, he gave me another gear and fought all the way to the wire.”

Cox indicated that the seven-furlong G1 Hopeful, run on the final day of the Saratoga meet on September 5, is the likely target for Mo Strike.

There’s no better place to run a career-best than Saratoga and City Man did just that when springing a mild upset in the Forbidden Apple, landing his first success at Graded level.

It was anybody’s race as the field turned for home, seven horses spread wide across the track, but it was City Man who found the biggest kick under Joel Rosario and the 12-1 fifth-choice surged into the lead inside the final furlong, taking command in the closing stages to beat Atone by two and three-quarter lengths. Second-favourite Public Sector was a nose away third, while 2-1 favourite Set Piece was a never-nearer fifth. The stopwatch showed 1:33 and four-fifths.

“He was unlucky last time,” said trainer Christophe Clement, in a neat twist also trainer of G1 winner Forbidden Apple. “Today he got a great trip and it all worked out.”

City Man was taking his record at the Spa to four-for-seven, and the five-year-old will be given the chance to improve that resume in the G1 Fourstardave on August 13.

Only one of the six unbeaten fillies in the Schuylerville could keep her perfect record, and it was Just Cindy who stepped up with a dominant performance.

The 2-1 second-choice hooked up with 6-5 favourite Summer Promise at the top of the lane and the pair quickly asserted, with Just Cindy putting her rival away at the sixteenth-pole and driving on under Irad Ortiz to win by two and a quarter lengths, stopping the clock in a tick under 1:12. Janis Joplin, the only maiden in the field, rallied well from the rear for third, two lengths further back.

“She’s a total pro, a quality filly,” said trainer Eddie Kenneally. “She had gears to get out when the gap opened up and she’s going to get better with distance.”

Just Cindy thus became the first US Graded-stakes winner for her Triple Crown-winning first-crop sire Justify, and she is expected to return to the Spa for the G1 Spinaway over seven furlongs on September 4.

Follow us on Social Media for more In Italian & Saratoga updates!