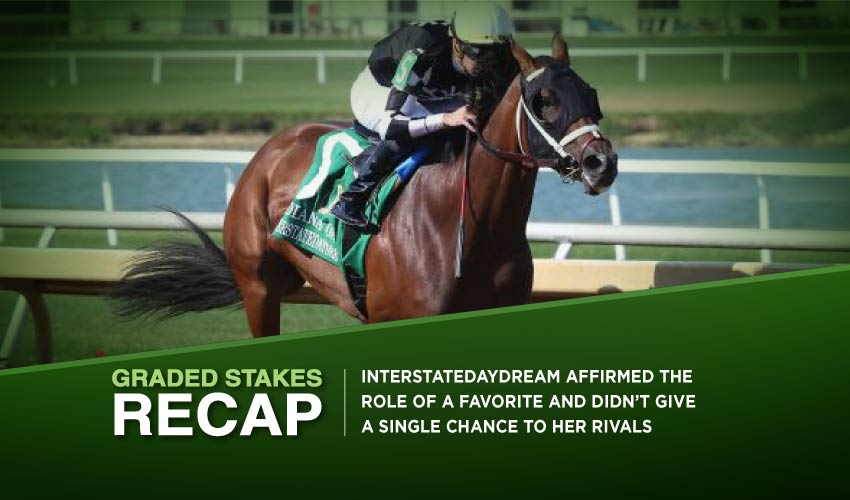 On Saturday, two Graded races for three-year-olds were held at the Horseshoe Indianapolis Race Course. Three-year-old fillies lined up for the Indiana Oaks, where Interstatedaydream affirmed the role of a favorite and didn’t give a single chance to her rivals, while among colts, Actuator showed off his talent and scored the Indiana Derby in front of another interesting colt, Best Actor. Here is the Indiana Oaks Recap.

The G3 dirt race attracted a field of seven three-year-old fillies who covered the distance of a mile and a half of a furlong.

Vying for the purse of $200,000, Interstatedaydream (30-100) was the hottest victory candidate, and in the end, the filly scored easily under Florent Geroux.

Galloping in second, she hit the final stretch behind already finishing Runaway Wife (94-10); however, once the favorite switched gears, her rival had nothing to answer her speed with. Interstatedaydream drew clear from her to bag a Graded victory by two and ½ of a length in 1m 43.78s.

Runaway Wife secured second place with the advantage of more than six lengths over third Silverleaf (248-10).
Victorious filly delivered Brad Cox his third consecutive triumph in the Indiana Oaks, while the daughter of Classic Empire nicely boosted her racing record.

After placing third in the G1 Ashland Stakes, she scored at the G2 stage, and on Saturday, she added a G3 win. Next time out, Interstatedaydream should aim for better competition as she obviously is too good to compete at the G3 level, given she left hard trying Runaway Wife behind with almost ridiculous ease.

Colts clashed on the dirt surface in the field of eight three-year-olds to fight for the purse of $300,000. Covering the distance of a mile and a half of a furlong, Actuator (16-5) proved to be the best in this G3 event when bagging the race in 1m 44.48s.

The Michael McCarthy bound bay traveled in fourth on the outside; subsequently, he improved his position slightly; still, he turned for home quite wide.

Nevertheless, he took command under James Graham and pushed forward also by finishing his rival, Best Actor (29-10), Actuator crossed the wire half a length in front of that opponent, carrying considerably bigger weight. King Ottoman (49-10) came home in third.

The son of Bodemeister entered the race just with three maiden outings under his belt; however, last time out, he was impressive in Churchill Downs, and therefore, he was a lively chance for the Indiana Derby.

Moreover, we expected him to enjoy a weight advantage over his rivals, which he actually did, and bettered flying Best Actor also thanks to this factor.

Best Actor is another colt, interesting for his next starts as Saturday’s run was only his third career one. King Ottoman gave his standard performance when finishing third; however, the race was basically over for favorite Rattle N Roll (19-10) right after a few strides.

He got into a collision, lost hope of finding a good position, and was forced to spend the race in the last place, from where he couldn’t return to contention.