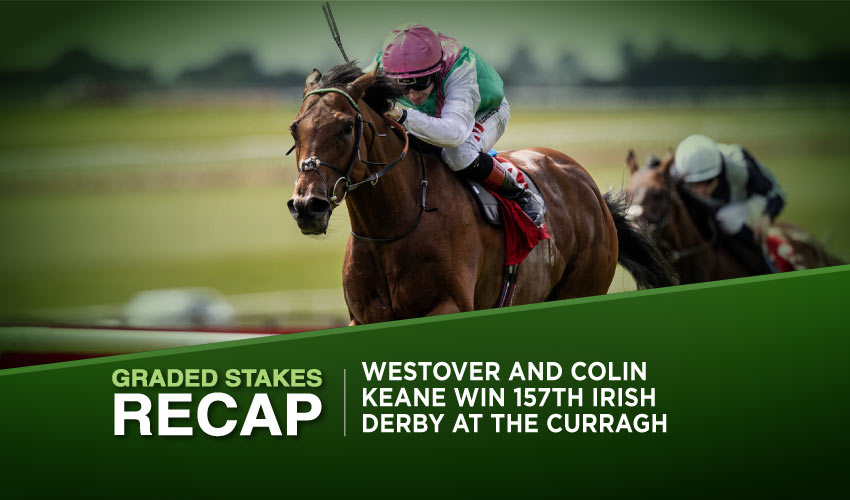 Saturday card at the Curragh Race Course saw its peak in the Irish Derby, where Westover demolished the competition and made amends for his luckless run in the Epsom Derby. Irish Derby Recap is here!

He triumphed by seven lengths. Two-year-olds then clash in the G2 Railway Stakes, and Blackbeard was almost the one celebrating the victory, but Shartash caught him just at the wire, while the G3 International Stakes transformed into a one-colt-show thanks to brilliant Aikhal.

The third Classic race of the Irish Flat season welcomed a field of eight three-year-olds vying for the purse of €1,000,000. On the turf surface, seven colts and one filly covered the distance of a mile and a half, while it was Westover (11-8) who utterly stole the show for himself and his jockey Colin Keane.

The Ralph Beckett-trained bay showed tremendous ability in the Epsom Derby, where he couldn’t get past third place due to a serious lack of room, but on Saturday, he didn’t allow any doubts about who’s the best horse in the field.

After traveling smoothly in second, Westover was urged to take command in the final stretch, which he did willingly and immediately started gaining an advantage over his rivals. In the end, the son of Frankel cruised home in 2m 34.80s in a class of his own, leaving second Piz Badille (18-1) behind by seven lengths. French Claim (16-1) kept third place after setting the pace.

Westover was nothing short of brilliant on Saturday. As a two-year-old, he won his maiden and placed second among novices and then at the Listed stage, while he’s been unfolding his talent in 2022. At first, he bagged the Classic Trial at Sandown, and even though he didn’t threaten Desert Crown in the Epsom Derby, his finish was impressive, given he had nowhere to go at some points.

This time, Westover had a clear run, and in the final stretch, he proved to be one powerful galloper. Some big things are yet to come of this classy three-year-old who destroyed the field at least by seven lengths. Piz Badille improved the impression from the Epsom Derby and took second in front of French Claim, while the Epsom Oaks victress, Tuesday (11-8), wasn’t able to get better than fourth.

The G2 race for two-year-olds was held at the distance of six furlongs and offered the purse of €120,000. On the turf surface, Blackbeard (5-6) was the leading chance for trainer Aidan O’Brien, and after some solid dancing moves behind the gates, the colt was prominent from the beginning.

Galloping enthusiastically, he looked ready to bag the G2 glory at the second attempt; however, Shartash (9-1) made a powerful move from the rear of the field to narrowly better the favorite. Under Ben Coen, the Johnny Murtagh bound bay scored in 1m 14.44s, leaving second Blackbeard behind by a short head. Apache Outlaw (22-1) ran in third.

The victorious son of Invincible Spirit had two outings under his belt prior to his Saturday success as he was third in his debut and then broke his maiden by a nose.

On Saturday, he needed to step up his game considerably, which he managed to do and denied Blackbeard G2 triumph once again as the dark bay vied for it after taking fourth place at the Royal Ascot meeting. The fight for the Railway Stakes win was between these two colts, while Apache Outlaw was the best of the rest to snatch up third place.

The Graded part of the Saturday card at the Curragh Race Course was concluded with this G3 turf race for three-year-old and older horses who clashed at the distance of a mile and a quarter. The purse of €100,000 attracted a competitive field of seven participants, including three-year-old Aikhal (20-1).

The Aidan O’Brien-bound colt didn’t draw much attention before the race, as his only 2022 outing resulted in the last place in the St James’s Palace Stakes.

Still, he was just superb on Saturday as he galloped second and took command in the final stretch, upon which he effortlessly scooted clear of his rivals to bag his premiere G3 victory in 2m 8.15s. Duke de Sessa (13-2) finished second 4 and ¾ behind the victor, with Rumbles on Thunder (11-4) settling for third.

In 2021, Aikhal showed off some talent when finishing fourth among the G1 company, yet he’s never looked like one of the Aidan O’Brien’s best colts, and therefore, his last place at the Royal Ascot only seemed to affirm it.

However, the son of Galileo delivered a beautiful performance on Saturday, and we’re interested in where he can go next and how he’ll fare among the even better competition.