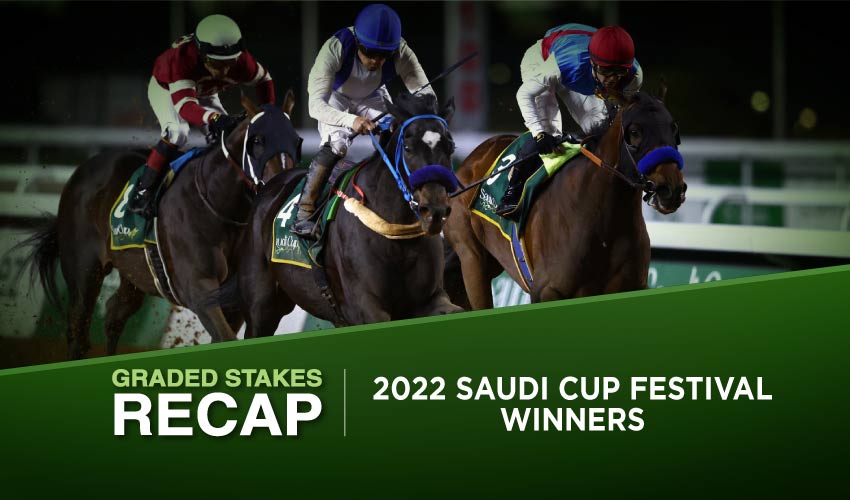 Riyadh turned Japanese on Saturday when four of the five races on the 2022 Saudi Cup Festival were won by Japan, an incredible outcome to a very competitive day’s racing, with jockey Christophe Lemaire aboard all four winners – Authority, Songline, Stay Foolish and Dancing Prince. It could easily have been a whitewash; Sekifu was just half a length away from adding a fifth win but was outrun in the Saudi Derby by the US colt Pinehurst.

In an extraordinary display of brilliance and dominance, Japanese horses ran riot at Riyadh on Saturday, sweeping the three turf races and adding a fourth victory for good measure, with jockey Christophe Lemaire in the saddle for each of the four wins and different trainers responsible for each success.

The vast depth of equine talent in Japan is common knowledge, but few international racedays have ever been so comprehensively dominated by an ‘away’ nation. The reign of the ‘Rising Sun’ began in the very first race, when Japan Cup runner-up Authority led throughout in the Neom Turf Cup, justifying his 2-1 joint-favourite’s odds in uncompromising style.

Local challenger Kaspar took his longshot odds into second spot when keeping on gamely through the final furlong but never looked in a position to trouble the winner, who is trained by Tetsuya Kimura. Kaspar had half a length to spare over the rallying French mare Ebaiyra; the time for the extended ten furlongs on fast turf was 2:06 and four-fifths.

There was a worrying moment when US shipper Channel Cat clipped heels and came down two furlongs out, but both he and jockey Joel Rosario emerged uninjured from the fall. The other joint-favourite, the British-trained Pyledriver, who was fading when becoming involved in the same incident, eventually finished a very disappointing 11th.

“It’s fantastic to be part of these international races, it’s always a big challenge,” said a delighted Lemaire. “If you have the chance to win a race you are the happiest man on earth. When you can achieve two, three or four winners, you’re flying through the clouds.”

The Frenchman employed different tactics aboard the filly Songline in the 1351 Turf Sprint, settling in midfield behind the fractions set by favourite Naval Crown before moving through to deliver a challenge a furlong out.

Songline soon joined issue with British raider Happy Romance and the pair duelled through the closing stages, but Lemaire gradually gained the upper hand and galvanised his 5-1 shot in the last few jumps to win by a neck from the late-closing Casa Creed, who himself had a neck to spare over Happy Romance at the line. Songline, trained by Toru Hayashi, covered the 1351 metres – hence the race’s name – in 1:18 flat.

Forty minutes later it was back to front-running aboard Stay Foolish in the Red Sea Turf Handicap, a race that was expected to go for export – but to Europe.

Lemaire had other plans and instead took the fight to the fancied horses, never looking likely to be caught, and Stay Foolish barrelled through the final quarter-mile to land a mild 14-1 upset by four and a quarter lengths, stopping the clock in a tick over 3:06. The Irish stayer Sonnyboyliston plugged on to be runner-up, a length and three-quarters ahead of the favourite Siskany.

The winner is trained by the flamboyant Yoshito Yahagi, the most familiar of Japanese trainers thanks to his two wins in last year’s Breeders’ Cup.

“I thought he’d do well, he was getting better day by day, and now I’d like to take this horse to the Melbourne Cup,” said Yahagi. “It’s been a big day for the Japanese racing industry to show their strength on the world stage.”

Japan and Lemaire completed their incredible four-timer with their easiest winner of the day, 7-4 favourite Dancing Prince showing his rivals a clean pair of heels from the gate and extending his advantage through the final furlong.

“I can’t take this in right now, but it’s real,” said Lemaire. “Unbelievable.” He wasn’t wrong.

The controversy surrounding Bob Baffert needs no further explanation or repetition, but it hasn’t affected the ability of his horses and Pinehurst became the latest big-race winner for the embattled trainer when digging deep to win the Saudi Derby. At least Baffert will be able to say he’s won a ‘Derby’ this year.

The Twirling Candy colt is already a Grade 1 winner – the Del Mar Futurity – but had something to prove here following two subsequent defeats. He did not falter, proving his class and determination in gritty style, disputing the lead before taking over at halfway and turning back two separate challenges through the stretch.

First Pinehurst put away the threat of Consigliere, another Japanese challenger ridden by Lemaire, and then had enough in the locker to withstand the flying finish of Sekifu, a second Japanese runner who was in a different zipcode at the top of the lane but never stopped trying, getting within half a length of the brave Pinehurst at the line. Consigliere was three-quarters of a length back in third; the time for the mile was 1:38 and change.

“When it was time to make a move he responded,” said winning rider Flavien Prat. “Every time a horse came to him, he responded.”

Before this success it would have been fair to say that Pinehurst was not in the first rank at Baffert’s barn, but he moved a few places closer to the fire with this gallant effort and will likely bid to maintain his upward trend in the Group 2 UAE Derby at Meydan on March 26.

Follow us on Social Media for 2022 Saudi Cup Festival updates!