Japan’s Loves Only You takes the Filly & Mare Turf 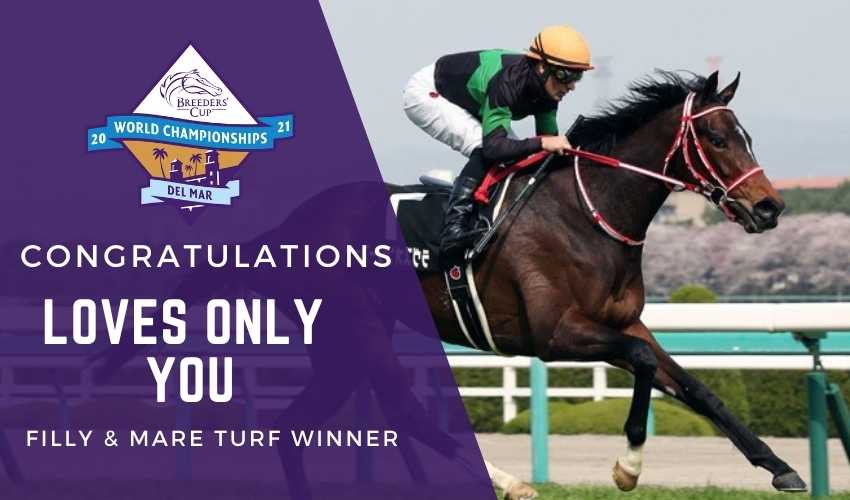 They call the Breeders’ Cup the world championships, and now Japan has written its name on the roll of honour for the first time through the exploits of Loves Only You, who finished off her race like a whirlwind to claim the Filly & Mare Turf in a thrilling finish.

In the past, 14 horses have travelled to Japan for the Breeders’ Cup and all have been beaten. Here was a change of luck in the shape of a globetrotting mare who has racked up more air miles than the rest of the field put together, trained to the minute by Yoshito Yahagi and ridden patiently and superbly by Yuga Kawada.

Going To Vegas set the fractions, pursued by Dogtag and Pocket Square, but all the action was happening in behind. The 2-1 favourite War Like Goddess sat last of all until making a strong looping move on the turn to take up the running at the top of the stretch. She put away the fierce challenge of the Irish raider Love, but had no answer to the late thrust of Loves Only You, who split horses in the last sixteenth and drove on strongly to win by half a length from the late-closing My Sister Nat.

Loves Only You, a daughter of Japanese super-sire Deep Impact and the 4-1 third choice in the market, covered the distance in a time of 2:13 and four-fifths. War Like Goddess claimed third, with Love fourth and last year’s winner Audarya keeping on for fifth.

Earlier this year, Loves Only You had finished a close third in the Sheema Classic at Meydan in Dubai and then won the Group 1 QEII Cup at Sha Tin in Hong Kong, and this victory will have a huge impact in Japan, one of racing’s superpowers. “This is a dream come true for Japanese racing, it has made history,” said a spokesman for the owners DMM Dream Co Ltd. “We would just like to thank our horse, and we would love to come back to Keeneland next year to try and win this race again.”