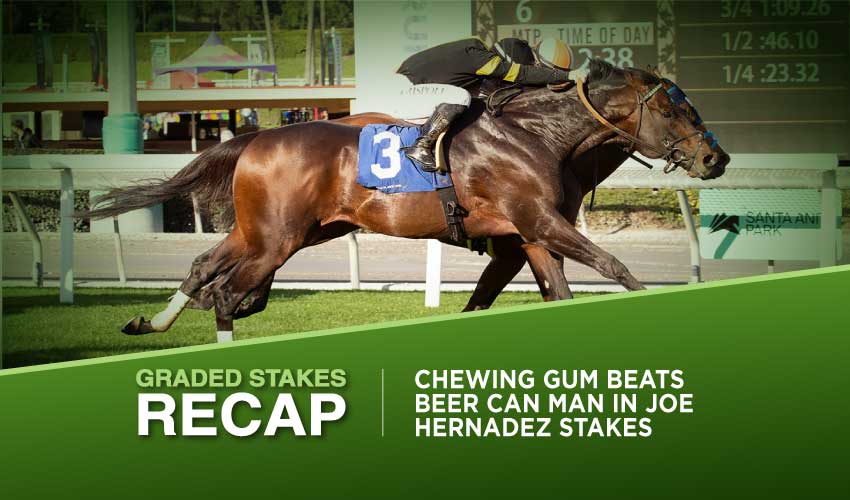 The past weekend brought some high-class action in the USA, including several tests for three-year-olds aiming at the Kentucky Derby. However, we shouldn’t forget races for older horses that clashed, for example, in Saturday’s Joe Hernandez Stakes, where seven-year-old Chewing Gum scored his very first G2 victory. In Santa Anita Park, two G3 races were then open to four-year-old fillies and older mares, and while La Canada Stakes formed into a one-mare-show thanks to brilliant As Time Goes By, Luck finally had enough luck to show her class in the Robert J Frankel Stakes, prevailing there easily.

2021 Joe Hernandez Stakes was the only G2 of the card opened to four-year-old and older horses who clashed at the distance of six and a half of a furlong, while the purse of $250,000 attracted a field of seven participants. On the turf surface, it seemed preferred Beer Can Man (11-10) with Flavien Prat aboard had everything under control since the start as the four-year-old used his early speed to settle at the front. In the final stretch, Beer Can Man was leading the pack and fighting hard to keep the first place, yet he was outrun by Chewing Gum (57-10) in the final.

The seven-year-old son of Candy Ride spent the race in the last but one place, however, Umberto Rispoli successfully urged him to close on the main group in the final turn. Once the horse trained by William Mott had enough space to rally in the final stretch, Beer Can Man’s endeavours to claim his first G2 came in vain. Instead of him, it was Chewing Gum who scored his first G2 victory and his premiere win at the Grade scene as he was second in the G1 event, yet never managed to secure a triumph among such a company. Chewing Gum crossed the wire in 1m 15.27s with the narrow advantaged of a nose over Beer Can Man, while new import from Europe, Bran (66-10), ran in third after a promising performance.

As Umberto Rispoli recalled, the trainer’s instructions proved key for the success, saying that he was advised to let Chewing Gum sleep for the first part of the race as the horse needs some time to find his legs and accept the pace, upon which he’s capable of great things. Chewing Gum indeed showed a sparkle at the Santa Anita track. He easily left behind for the victory considered Commander (61-10), who finished only fifth, being bettered also by fourth Delaware (178-10).

Four-year-old fillies and older mares met up in this G3 turf race held at the distance of a mile and a furlong, and a field of seven participants competed for the purse of $100,000. Earlier in the week, six-year-old Mucho Unusual (16-5) was trusted to win the Robert J Frankel Stakes for the second time in a row, yet it was five-year-old Luck (9-10) who jumped out of the gate as the favourite in the end, upon which she successfully delivered a win for the connection, including trainer Richard Baltas. After her fine endeavours in the G1 and G3 company, she was expected to show a good effort also on Saturday; however, she even exceeded the expectation as Luck was simply brilliant.

Under Flavien Prat, she rested throughout the initial part of the race, but once the field hit the final turn, Luck rallied forward with ease. Suddenly, she turned in third place for home and then charged for the lead, unchallenged by others. By her effortless win in 1m 48.26s, the daughter of Kitten’s Joy once more suggested that she should belong among the best turf fillies and mares in the US, and hopefully, she’s cemented the position in her future starts. Three and ¾ of a length behind the winner, Bodhicitta (15-2) made amends for her recent lacklustre performances and finished second by a nose in front of Mucho Unusual. Still, it’s necessary to note Mucho Unusual carried more weight than both of her mentioned rivals.

The rest of the field was no match even for the second and third contestant, behind which Moraz (13-2) crossed the wire in fourth and Global Brand (29-1) in fifth.

Just a field of five four-year-old fillies and older mares clashed in this G3 turf race and covered the distance of a mile and a half of a furlong while competing for the purse of $200,000.

Five-year-old As Time Goes By (3-5) trained by Bob Baffert was the leading chance here as she’s had some big successes under her belt, including a second place in the G1 Beholder Mile. She’s hit some bumps on the road since then, never getting close really to that performance; still, the daughter of American Pharoah scored the G3 Bayakoa Stakes in December. Showing some form back then, she was expected to transfer it also to Santa Anita, but she did much more than that. She was quick on her feet and piloted by Flavien Prat; the bay mare settled in second behind Park Avenue (7-2), where she galloped throughout the whole race until the final turn. As soon as the jockey asked her for more,

As Time Goes By smoothly moved to the first place as the closer to the post she was, the bigger advantage over her rivals she worked out. In the end, the brilliantly bred mare out of Take Charge Lady won the race in an impressive style in 1m 44.31s, bettering second Park Avenue by an abysmal 13 and a half of a length. Unable to threaten even the second filly, Moonlight d’Or (37-10) managed to grab third after spending the race at the rear of the field.

Fi Fi Pharoah (44-1) was fourth, the winner’s stablemate, Velvet Slippers (69-10), didn’t draw on her promising performances in the smaller races and trailed home as the last of all.