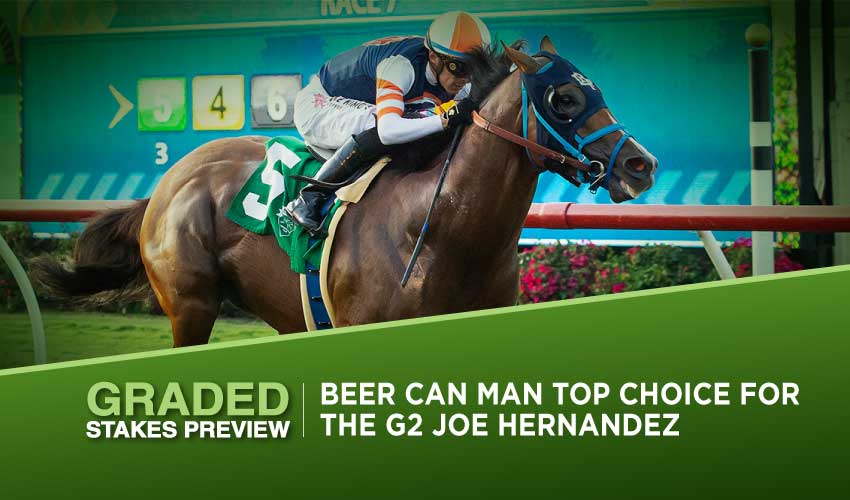 Besides the Sham Stakes meant for three-year-olds, Saturday’s card at the Santa Anita Park offers three other Grade races with participants promising some exciting actions. At first, sprinters will clash in the G2 Joe Hernandez Stakes where Beer Can Man and Commander meet once again; still, the former looks the one to beat here after his fine results in 2021.

After that, four-year-old fillies and older mares with meet up in the G3 Robert J. Frankel Stakes, where Luck will try to deny Mucho Unusual second triumph in the race, while at the end of the day, the G3 La Canada Stakes might see another display of class from five-year-old As Time Goes By.

The beginning of the year is, as usual, the right time for this G2 turf event held at the distance of six and a half of a furlong. The $250,000 race is open to four-year-old and older horses, while the field of seven participants seems more or less equal with chances. There’s not a single winner at the G2 scene, and despite the fact Cupid’s Claws (8-1) is experienced even among the elite, Saturday’s race might be too short for him. In terms of the leading contestant here, we need to mention four-year-old Beer Can Man who scored the G3 Cecil B. Demille Stakes in 2020. Although he didn’t run often in 2021, he managed to bag two Allowance victories and second places at the Listed and G3 scene, presenting himself as a relatively reliable prospect.

The Mark Glatt bound colt finished second in the G3 Turf Monster Stakes at the Parx Racing, while it seemed he’d be more suited by bigger tracks such as Santa Anita, so he definitely should be considered for Saturday’s race alongside five-year-old Commander. The French-bred charge of Ruben D. Alvarado hadn’t shown anything promising for the more prestigious races until 2021, when he was running in fine form, finishing third in the G3, placing in Allowance races, and even winning one easily. Last time out, he hit the track at Del Mar where he carried more than Beer Can Man and subsequently lost to him, however as their carried weight will be the same on Saturday, their chances should be almost the same, too.

As it was said, the field is very competitive, so even though the mentioned duo Commander – Beer Can Man are the most probably victory candidates, the rest of the contestants aren’t bad horses either. Seven-year-old Chewing Gum ran a cracker in the G1 Jackpocket Jaipur Stakes, taking second place as one of the outsiders, while Momos once finished third in the G2 Saratoga Special Stakes; however, he looks more of a Listed horse. Still, he’s just a four-year-old, so that some improvement might come of him, and it wouldn’t be that surprising. The last to mention is the new import of Joe Sadler, a French-bred Bran who doesn’t travel to the US with any stellar results tight to him, but only Saturday’s race can tell us what the four-year-old gelding is made of.

Our pick betting for the Joe Hernandez Stakes is:

Beer Can Man, as he’s a reliable, consistent horse who performs at any distance from five furlongs to one mile. He just doesn’t care and always tries hard, which could be enough to score on Saturday.

The $200,000 race is open to four-year-old fillies and older mares who are about to clash at the distance of a mile and a half of a furlong. In this G3 turf event, six participants will line up, with four of them vying for the position of the favourite, given their chances look quite similar in this renewal. At the time of writing the preview, five-year-old As Time Goes By is the leading chance for the La Canada Stakes after her sure victory in the G3 Bayakoa Stakes at the beginning of December.

Bob Baffert’s charge had a good start, showing the way most of the time, upon which she scored easily, while Moonlight D’Oro had to settle for third. The brilliantly bred As Time Goes By also placed at the highest stage and bagged two victories in the G2 races throughout 2021, and even though she came short in some prestigious races, she should definitely handle Saturday’s competition if everything plays into her stride. Still, her form is slightly debatable, and her chances were more appealing in spring so that the race might result in an upset.

Mentioned Moonlight D’Oro won the G3 Las Virgenes Stakes, being the only possible threat for As Time Goes By with some experience with the Grade races. Bob Baffert relies not just on the favourite but also on Velvet Slippers with four outings under her belt, including a second place at the black-type scene and a tight victory in the Allowance race. Running in second, Velvet Slipper outrun her rival in the distance of a mile, fulfilling her position of the favorite here. Besides this promising four-year-old filly, Park Avenue is also in the mix after her impressive success in an Allowance race at the Los Alamitos, where she bettered second Fi Fi Pharoah by five lengths. The last to mention is five-year-old Cowboys Daughter with four Allowance victories in a row.

Our Top Betting Pick for the La Canada Stakes is:

As Times Goes By due to the class she displayed during spring 2021, and even though we doubt her current form slightly, probably only her stable-mate Velvet Slippers could be classy enough to run her down.

The field of seven four-year-your old fillies and the older mare will line up for this G3 turf race held at the distance of a mile and one furlong. The purse of $100,000 attracted some participants experienced with running among the elite, including six-year-old Mucho Unusual trained by Tim Yakteen. She will attempt to become a back-to-back winner here. In 2020, the mare scored the G1 Rodeo Drive Stakes, which she added to her record of some valuable placings and a G2 victory, yet after finishing down the field at the Breeders’ Cup 2020, she was pointed to the G3 company of the last year’s Robert J Frankel.

Mucho Unusual then went on to bag another G3 win and also placed in the G2, while she suggested there’s some form about her in October, winning an Allowance race despite carrying the biggest weight. Although it’s been a while since she hit the track, she’s definitely one of the most serious victory contenders; however, five-year-old Luck (8-5) could pose a considerable threat to her.

At first, the Richard Baltas bound mare won an Allowance race, but then Luck finished second in the G1 Rodeo Drive Stakes and G2 Red Carpet Handicap. It’s true that it’s not easy for her to bag a win due to her running tactic; in other words, she just rallies forward too late to catch the winner usually, but one day Luck will be lucky enough to strike gold. It could be on Saturday as the rest of the field is not much appealing. Both Bodhicitta and English Rose seem classy enough to handle the G3 competition; however, the former looks without any form right now, or she might’ve lost interest in racing overall, while the latter needs to bring a more explosive finish to compete with Luck.

Last time out, she was close behind the winner in the Red Carpet Handicap, so with luck at her side, she might have a say in the closing stage of the race. When clinging to suggested forms in their Allowance performances, duo Global Brand and Moraz are also in the mix, still, it’s difficult to see past Luck and Mucho Unusual here.

Our Betting Pick for the Robert J. Frankel Stakes is:

Luck; she’s just a Grade winner in the making; moreover, she should be able to run down even the G2 or G1 company. She only needs some luck on her side.

Make sure to stay tuned for the latest Horse racing odds, races results and racing entries. Sign up and get a 10% rebate.