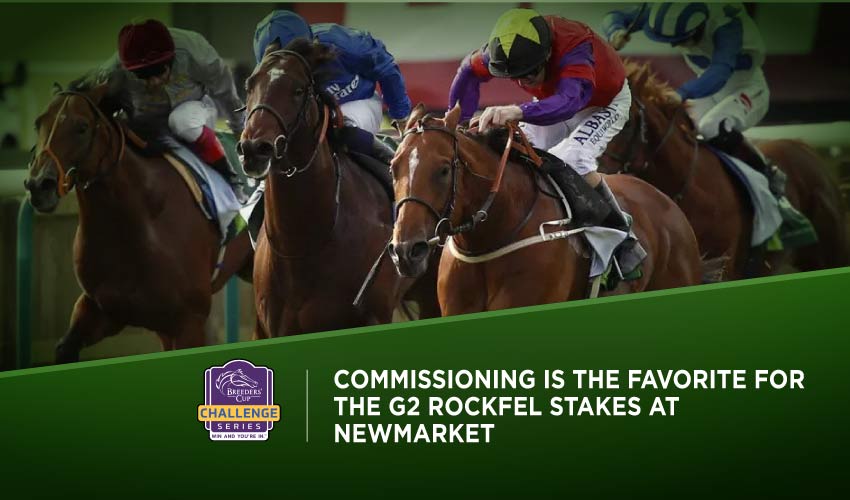 This weekend see’s the return of some top quality racing in the UK with this Friday’s Newmarket card looking hugely exciting.

Two Group 2 races dominate the seven race card and we will preview everything you need to know about the Rockfel Stakes and Joel Stakes.

We have reached a funny part of the flat racing season in the UK. The majority of big racing festivals have finished and we are now at the stage where trainers and jockeys are looking to land as many big prizes as they can.

This year’s Rockfel Stakes will provide some signals as to what horses could have a chance of landing some of the Classics next year and the lineup for the race looks hugely exciting.

Likely to head the market is the John & Thady Gosden trained Commissioning.

It’s easy to see why she is the favorite following her comfortable win in the one and only start of her career. It will be fascinating to see how she handles the occasion with all the spotlight on her.

The second favorite for the contest is Olivia Maradala. In comparison to most of her rivals, she is massively experienced and will be competing in her 6th career start. She has been highly tried in her young career, and finished as a runner up in a Grade 2 contest last time out. With some good form in the book she could be the value play of the race.

In this race there will be value littered throughout the card. The money has come for the Richard Hannon trained Rich throughout the week and she could go off as a short price by the time the race rolls around.

Rich has just had the one career start and that was a promising display which he won convincingly. There could be more to come and if he handles the slight step up in trip he could be one to keep an eye on.

Rage of Bamby is yet to taste defeat in any of her two starts this season and will be hoping to make it a third race unbeaten in this year’s Rockfel. Her win in a novice stakes race last time out was massively impressive and there could be plenty more to come here.

The unknown runner in the field looks to be the Charlie Hills trained Sydneyarms Chelsea. She brings some winning Group form into the contest following a victory in the Prix Six Perfections over in Deauville.

That form is a little untested but should still be respected. At a bigger price she could be worth a small play.

This is a really hard race to call and it wouldn’t be a surprise to anyone if an outsider of the field were to emerge victorious.  However when it comes to top class fillies John Gosden knows how to get one ready for the big day. There is real excitement around Commissioning and hopefully she can cement her class with a positive showing here.

Seven horses are due to head down to post for this years Joel Stakes. A top class race looks to be on the cards with several high profile performers looking to end their season with a bang.

Currently leading the field in the betting is Potapova. It’s been a tough season for Potapova who has mostly struggled to land any sort of blow in her five runs so far this season, however that record was put right last time out when she ran out a really convincing winner in Group 3 company.

That was the Sir Michael Stoute trained horse first Group win and if she runs as well this time out she could take all of the beating.

Looking to upset the favourite will be the Archie Watson trained Tempus who arrives here bang in form and is seeking a fourth successive win. Two of his last three wins have come in Group 3 company and the manner of his last win would suggest he is more than capable of winning at this level.

Mutasaabeq for Charlie Hills and Jim Crowley could be the danger horse of the race. Without a win in his last four starts, he heads into the race slightly under the radar but he has gone close in Group 2 company and that form does match up well here. He could be the value option of the race.

Pogo is one of the two six year olds in the race and has plenty of experience to put to good use. A consistent performer, Pogo has won two Group 3 contests this season but has largely struggled in this class. He is capable of causing a shock but might be best watched here.

El Drama is another who has been highly tried this year and has largely struggled to make a dent. His runs haven’t been without promise but this race looks a step too far.

The same can be said of the Wizard of Eye. He will start the day as the huge outsider of the field and it would be a major shock if he were to emerge on top here.

One horse to keep an eye on could be Oscula. Trained by George Boughey, Oscula has had a great year winning two Group 3 races. This would be the biggest win of his career and it wouldn’t be a surprise if he was able to play a major part in proceedings.

This is another tricky race to call but Potapova looks to be a horse on the up. Her victory last time out was very impressive and if she can produce something similar she could be the one to beat.