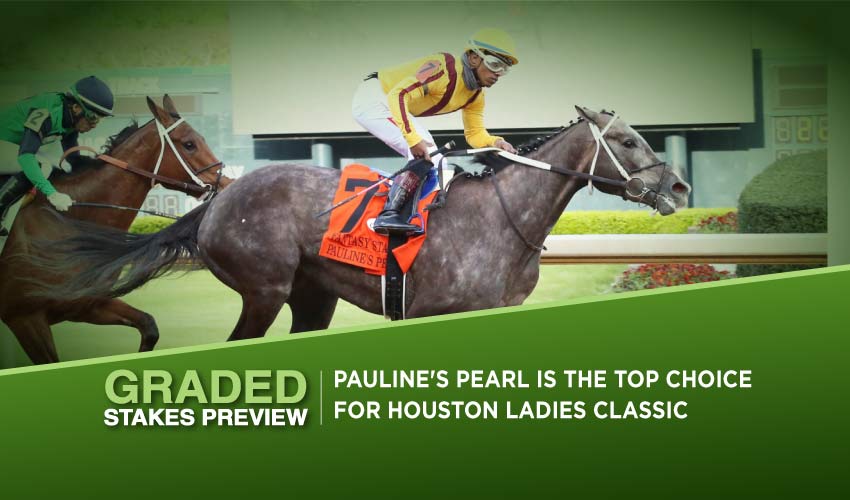 The Sam Houston Racecourse hosts only two Graded races throughout the season, while both are held this Sunday. At first, fillies and mares will meet up in the G3 Houston Ladies Classic Stakes, which is the richest local race, and then four-year-old and older horses clash on the turf surface in the John B. Connally Turf Cup Stakes.

The $400,000 race held on the dirt surface has boasted some high-class winners in the past years, seeing victories of Lestruska, Midnight Bisou, or Forever Unbridled, who then achieved numerous stellar results. Four-year-old fillies and older mares are about to cover the distance of a mile and a half of a furlong in this G3 event, with Pauline’s Pearl being the leading chance here.

The Steven Asmussen bound four-year-old filly ran nine times in 2021, achieving a G3 and a Listed victory but  she bagged three second places at the G3 scene, too. Last time out, it was the Listed Zia Park Oaks she won, still, she hasn’t been out since November. Neil J. Pessin’s Audrey’s Time showed up at the end of December to score in the black-type category at Fair Grounds despite carrying the biggest weight back then.

Although she’s already five-year-old, it seems she should be capable of performing very well in a G3 race, especially after she finished third in the G2 company. This race should suit her, and she could be the main rival for Pauline’s Pearl. Regarding the remaining five participants, The Mary Rose deserves to be mentioned thanks to her impressive victory in an Allowance race at Oaklawn Park.

Our betting pick for the Houston Ladies Classic Stakes is Pauline’s Pearl as she’s shown the most class of all the participants; however, both The Mary Rose and Audrey’s Time look good as well.

The turf track at the Sam Houston Park welcomes four-year-old and older horses who are about to clash at the distance of a mile and a half, with the purse of $200,000 being up for grabs. The G3 race belongs among the most prestigious events held at this racecourse, with trainer Michael Maker having won it seven times.

He can enhance his record on Sunday as he sends a bunch of horses here, including Ajourneytofreedom, a five-year-old gelding that gathered some fine places at the Grade scene in the past. In 2021, he ran in third in the G2 Belmont Gold Cup Stakes as he doesn’t mind a two-mile distance at all; still, he’s capable of running well at Sunday’s trip, which he confirmed in last year’s John B. Connally Turf Cup Stakes when he finished second.

Last time out, he was second at the Listed scene, while Fantasioso ran in third and poses as the greatest threat for the favourite. Other horses could run well, too; however, they’d need to make amends for their previous below-par outings, which is the case of Tide of the Seas, Listed winner. Hierarchy is also in the mix.

Our top pick for the John B. Connally Stakes is Ajournytofreedom whose ability should be enough to improve his last year’s second place to a victory