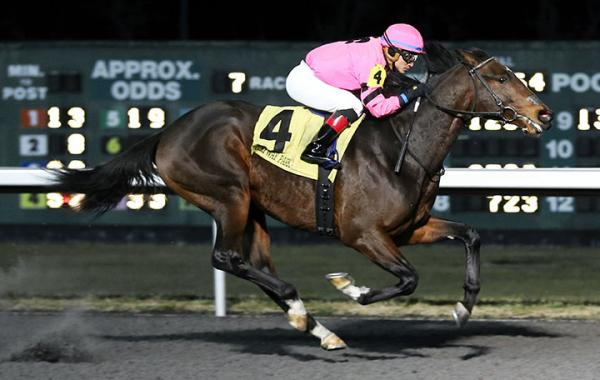 Following delays due to weather conditions at Turfway Park last week, the $100,000 John Battaglia Memorial Stakes will now take place on Friday. It will run as Race 5 on the eight-race card and include a sizable field of 13 covering 1 1/16 miles on the all-weather track.

One of the leading entrants coming into the John Battaglia is Eclipse Thoroughbred Partners and Gary Barber’s Gretzky the Great. The Nyquist colt is the only Grade 1 winner among the field of 3-year-olds.

Trained by Mark E. Casse, the runner has a total of three victories and one second-place finish in five races. He has some of the highest purse earnings in the field, totaling $272,205.

The colt’s first stakes victory came in the Aug. 23 Soaring Free Stakes, which he followed up with his Grade 1 win in the Sept. 20 Summer Stakes, both taking place at Woodbine. In the latter, he registered a 93 Speed Figure as he beat Ready to Repeat and Dolder Grand.

Gretzky the Great will be making his first start since Nov. 6, when he finished sixth in the Breeders’ Cup Juvenile Turf presented by Coolmore America (G1) at Keeneland. In that outing, he registered a career-high 95 Speed Figure.

He will be joined by jockey Gerardo Corrales as the pair break from post 1.

He followed that stakes win with a fifth-place run in the Sept. 5 Iroquois Stakes presented by Ford (G3) a month later at Churchill Downs.

The runner’s only victory came in the Oct. 3 Laurel Futurity (Black Type) at Pimlico, where he outran Wootton Asset.

The entire order of the John Battaglia field in post position is Gretzky the Great, The Predicament, Twirling Mamba, Like the King, Kinetic Sky, Pico d’Oro, Hard Rye Guy, Hush of a Storm, Form Moultrie, Notable Exception, Catman, Warrior in Chief, and Bakwena.