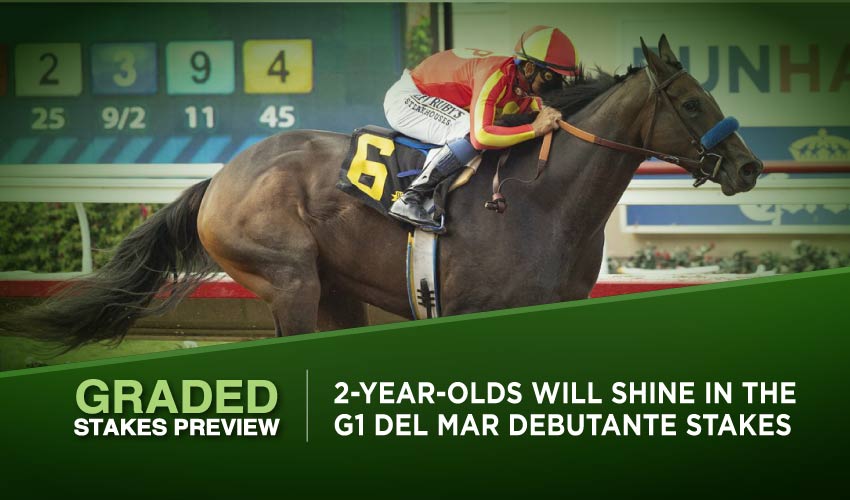 Trends bettors will have plenty to occupy them at Del Mar on Saturday – Bob Baffert has won the G1 Del Mar Debutante Stakes a record ten times and saddles Home Cooking and Fast And Shiny against G2 winner Vegas Magic, while Flavien Prat has won the last four editions of the G2 John C Mabee and partners last year’s heroine Going To Vegas, as she bids to go back-to-back against old rival Going Global.

When we talk about the Del Mar Debutante, the highlight at the oceanside track on Saturday, we talk about Bob Baffert, who has won it a record ten times and the last three years running.

The controversial master trainer has two candidates who might improve his record, both in the same ownership. Home Cooking (9-5) has the greater experience, finishing third here on debut and returning to blitz the field in a maiden over five and a half furlongs, clearing right away to win by nine and a quarter lengths dialled down.

Her barnmate Fast And Shiny (8-1) got it right first time here over five furlongs, not as impressively but showing abundant promise on her way to victory by a length and a half. The morning-line suggests Home Cooking is the first-string but it’s impossible to know the rate at which each filly is developing.

Doug O’Neill has never won this race but is also doubly represented, with the unbeaten Vegas Magic (3-1) by some way the more accomplished given her success in the G2 Sorrento here over six furlongs last month. There was no fluke about it despite her 14-1 odds, she completed a three-timer without undue fuss and beat much better-fancied barnmate Satin Doll (20-1) seven and a half lengths into fourth.

It’s probable she’ll confirm the form with Satin Doll, who won well enough on debut but had no answer forthcoming when the questions were asked in higher grade.

A little extra yardage won’t be an issue for And Tell Me Nolies (3-1), a gutsy neck winner over six and a half furlongs here on her second start, with Ice Dancing (8-1) two and a half lengths further back in third on her debut, getting going when it was too late but sure to improve for the experience.

That goes too for Kissed By Fire (8-1), who came up against a potential star on her debut and acquitted herself very well, chasing home the dazzling Justique here over five and a half furlongs and finishing a half-length ahead of fellow debutante Home Cooking. Given the reputation of the winner and what Home Cooking did next time (see above), the form appears pretty strong and Kissed By Fire should move up a mile with that under her belt.

The only runner without experience of the Del Mar strip is Arella Star (15-1), who crosses the continent after breaking her maiden at the second attempt at Gulfstream Park, cruising by two lengths over five and a half furlongs.

Justique may be a star of the future and KISSED BY FIRE, runner-up to that filly on debut, can confirm placings with the third Home Cooking.

If recent trends are to be taken into account, the John C Mabee is at the mercy of jockey Flavien Prat, who has won the race for the last four years running and five times in all, a joint-record. This year Prat, who also has the great privilege to ride the lightning that is Flightline, keeps the mount on last year’s winner Going To Vegas (5-2), one of three contenders trained by Phil D’Amato.

Twelve months ago Going To Vegas pressed the pace before kicking clear to win by a cosy two and a quarter lengths, and then won the G1 Rodeo Drive at Santa Anita, stretching out her stamina to ten furlongs and scrambling home by a head, but she has suffered from a nasty case of seconditis in 2022, finding one too good for her on all three starts.

Last time out – her first run for D’Amato since leaving Richard Baltas – the culprit was Ocean Road in the G1 Gamely at Santa Anita, but Going To Vegas nevertheless pushed barnmate Going Global (4-5) into third by a length and beat fifth-placed Eddie’s New Dream (15-1) by a further length and a quarter. The return to Del Mar is likely to suit.

That Gamely defeat was a rare reverse for Going Global, who is eight-for-11 since shipping from Ireland and who regained the winning thread in style next time out in the G2 Yellow Ribbon here over a mile-sixteenth, when she came running through the stretch and drew off to beat Avenue De France (6-1) by three lengths, with barnmate Burgoo Alley (12-1) two and a quarter lengths further back in fourth and Park Avenue (6-1) last of seven.

The mile-eighth is at the maximum extent of Going Global’s stamina, but she did win last year’s G1 Del Mar Oaks over course and distance and her consistency and talent will always make her tough to beat.

Between them the ‘big two’ have got this field covered on form. The Yellow Ribbon was one of the best efforts of D’Amato’s third-string Burgoo Alley’s career, so it would be a surprise if she could somehow improve enough to threaten her barnmates.

That remark can also be applied to Avenue De France, a four-time stakes-winner – including here over a mile in July – but zero-for-five at Graded level, and to Park Avenue, who is zero-for-four at Del Mar with her only win outside allowance grade coming in a mile stakes at Lone Star Park, when she beat Avenue De France by a length.

The only one outside this tangled web is Bellamore (20-1), who was well beaten on her only start at Graded level, was third in a minor stakes here over a mile and three-eighths last time, and doesn’t look a good fit in this company.

This looks booked for one of the G1-winning ‘Going’ horses. Going To Vegas has yet to really fire this year so GOING GLOBAL is the choice to prevail.