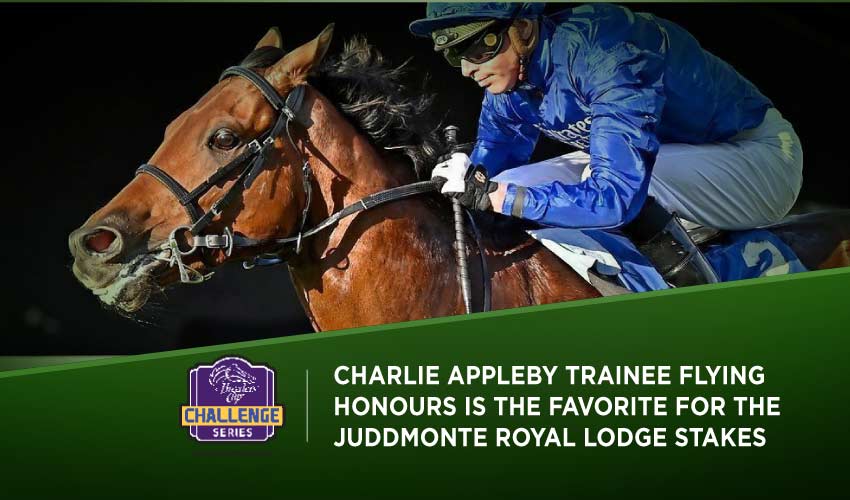 This Saturday sees a fantastic card being run at the home of UK racing, Newmarket. There are seven races on the card which is packed with quality throughout. This preview will focus on three races, the Group 2 Juddmonte Royal Lodge Stakes and two Group 1 races – the Cheveley Park Stakes and Middle Park stakes. Here is everything you need to know.

At the time of writing nine horses have been declared for this year’s Royal Lodge Stakes. The winner of this race will not only land a highly prestigious race, but also qualify for the Breeders’ Cup Juvenile Turf that will be held at Keeneland later this year.

With so much on the line it isn’t surprising to see that there is a high-quality field all hoping to book their ticket.

Appleby hasn’t quite had the year he would have liked and will be looking to send a strong hand to this year’s Breeders’ Cup, particularly after his strong showing last year. In Flying Honours he has a horse that looks special and it will be interesting to see how he handles the biggest test of his young career so far.

Aidan O’Brien is certainly used to success in the Breeders’ Cup and is no stranger to success in this race having won this race on no fewer than seven occasions. For this year’s renewal he has entered four horses in the hope that he can land this race for the third time in the last five years.

His strongest fancies look to be between Auguste Rodin and Greenland.

Auguste Rodin will be competing in his fourth career start and like Flying Honours is looking to land his third successive victory. He brings strong looking form into the contest having won last time out in Group 2 company. Likely to head off as the second favourite he looks to be the undoubted value angle of the race.

Greenland has had one more career start than his stablemate but doesn’t quite have the form to match. A winner last time out in Novice company his win that day was impressive, but more will be needed if he is to land this prize.

Adelaide River is another O’Brien runner who has a live chance. This will only be his third start and he will be looking to build on his second-place finish last time out in Group 3 company. He was only just denied that day and with improvement on the cards he could be a threat at a bigger price.

Hans Andersen will start as O’Brien’s biggest priced runner and it wouldn’t be a surprise to see him act as the pacemaker for the race allowing one of his other three runners to hopefully swoop late to pick up the pieces.

One of the races most intriguing runners looks to be Holloway Boy who will represent the Karl Burke yard. This will be his third career start and he will be looking for his second win. He announced himself in a big way by landing the prestigious Chesham Stakes on his debut. He then backed that performance up with a second-place finish in the Group 2 Vintage Stakes. Despite not winning, it was still a promising run and with more experience under his belt he could certainly run a big race here.

Flying Honours is likely to start as a short priced favorite and if everything clicks into gear he is likely to be the winner. However, Charlie Appleby hasn’t had a great season and Auguste Rodin’s form has a solid look about it. At a bigger price he could be the way to play here

At the time of writing ten horses will head to post for this year’s Cheveley Park Stakes. A race for two-year-old fillies, the winner of this race is likely to be a prominent figure in the betting for the 1,000 Guineas next year.

Aidan O’Brien has a tremendous record in this race and is looking to scoop this prize for the 5th time in just the last seven years. The winner of this race last season with Tenebrism, he runs just one this year in the form of Meditate.

A winner of four of her last five starts, she heads to Newmarket having been denied in the Group 1 Moyglare Stakes. It was a disappointing run as she was no match for the winner that day and her connections will be hoping that she can show some of the form that saw her land multiple Group 3 and Group 2 races earlier this year.

Meditate is likely to start as the second favourite behind the Richard Hannon trained Trillium.

Trillium looks like a smart prospect and is hoping to land her fourth win in a row. A narrow winner of the Group 2 Flying Childers last time out, that was a good run where she swept from the back of the pack to win more comfortably than the margin of victory suggested. She has shown that she has a devastating turn of foot and if she can handle the undulating Newmarket track, she looks to be the one to beat.

Karl Burke has emerged as one of the leading Northern trainers and he sends down Swingalong in the hope of landing one of the game’s most prestigious prizes.

Swingalong is another who has winning Group 2 form following her success in the Lowther Stakes last month. She ground out the victory that day certainly suggesting that more improvements could be on the cards. She will start at an attractive price and if the top two in the market fail to fire, she should be good enough to pick up the pieces.

Lezoo for Ralph Beckett is looking to land the fourth win of her career in what will be just her fifth start. She will be hoping to build on her Group 3 Princess Margaret Stakes win last time out.

When it comes to Group races exclusively for fillies, nobody has had a better season than Paddy Twomey. Having dominated the Irish fillie racing scene, he sends over Treasure Trove to try and win this race. Regarded as an outsider in this field, Treasure Trove produced a nice performance when winning the Group 3 Tower Stakes. A repeat of that performance could see her make the final shakeup.

Although Meditate heads into this race with questions to answer, we think her previous level of form should stand her in good stead here. There are dangers everywhere you look and Trillium certainly has to be respected, but in what could be a great race we will side with Meditate to just get the job done.

Just half an hour after the conclusion of the Cheveley Park Stakes, it’s the turn of the boys who will be trying to land the Middle Park Stakes.

Eight will head to post for this year’s renewal and the winner will play a prominent part in the ante post betting for the 2,000 Guineas.

Aidan O’Brien heads into the contest as the race’s leading trainer having won the race on six separate occasions and he has a great chance of making it seven wins with the hugely exciting Blackbeard.

Blackbeard has had a busy novice campaign and has really stepped up in his last two performances. A winner last time out in the Group 1 Darley Prix Morny, Blackbeard beat some good horses that day. His win wasn’t clear cut, but he should rightly start as the favourite.

There will be several looking to take him on here and a leading fancy is bound to be Marshman. A scopey colt, Marshman ran a good race to finish second in the Gimcrack stakes. That was a huge step up on his previous races and with further improvements on the card he will be a major player here.

Throughout the week, the money has come for the Charlie Appleby trained Mischief Magic. A winner of his last three starts, he won nicely last time out in the Group 3 Sirenia Stakes. The noises coming out of the Appleby yard is that he is running well at home and his connections will be confident of a big race.

Persian Force for Richard Hannon was long regarded as the best two-year-old on British shores but two defeats in his last two runs have left him flying under the radar here. A more than capable horse, he should still be improving and looks to be an attractive priced option.

The most intriguing runner in the field is Zoology. Trained out of the James Ferguson yard, he must be highly thought of as he is being pitched into this company off the back of just one run. That run was impressive as he cruised to a victory in a Novice Stakes in Yarmouth, although the form doesn’t amount to much, he really could be a horse with a huge future.

Aidan O’Brien just knows how to win these big races and with Blackbeard he has the horse to beat. Blackbeard has already finished ahead of the likes of Persian Force and if he runs his race, he is the one to back here.