KEENELAND ENTRIES ODDS FOR THE WEEKEND 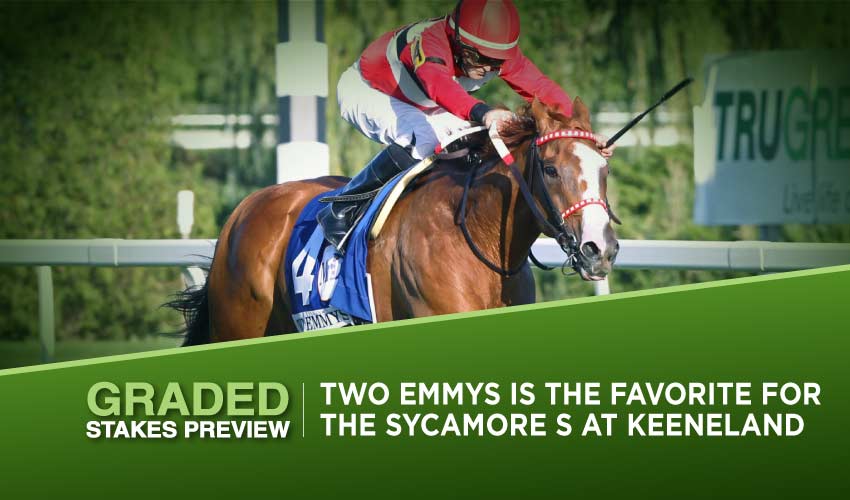 The Keeneland entries odds are ready to take your pick. On Friday, the G3 Sycamore Stakes will see whether Two Emmys will draw on his G1 win from the Mr. D. Stakes. On Saturday, three-year-old fillies will clash in the G2 Raven Run as Obligatory is the one to beat here, while Sunday’s G3 Dowager Stakes attracted a varied field of ten fillies and mares.

The G3 turf race for three-year-old and older horses attracted a field of 12 participants. They will clash at the distance of a mile and a half, while the purse was set to $150,000. Despite the race being open even to younger horses, only the older ones appear on the Racecard, with five-year-old Two Emmys (3-1) being the favourite. McLean Robertson’s charge used to stick to the Allowance races until this year’s March when the chestnut gelding aimed at the G2 Muniz Memorial Classic Stakes at Fair Grounds where the underestimated horse showed great early speed and lost only to one rival. Therefore, he forged his Grade premiere into a valuable second place, upon which he grabbed the same place in an Allowance race one more before Two Emmys finished third in a G3. Still, it wasn’t everything the newly discovered talent was capable of – going for the G1 Mr. D. Stakes as one of the outsiders, he powered to the front at the beginning and managed to hold off his rivals to the finish line.

The big chestnut achieved his biggest career win, so entering Friday’s competition, Two Emmys is definitely an exciting contestant. On the one hand, his seems to possess enough ability dominate the field, on the one, being a front-runner, it’s a question of how he’ll handle the trip. To his credit, the chestnut is a courageous horse who could fight for the win if necessary.

Four-year-old Glynn County (7-2) used to run amongst the lesser competition as well, but when he tried his luck in the G1 United Nation Stakes in July, he finished fifth and left a few well-known names behind. Like Two Emmys, Glynn County went on to Mr. D. Stakes where he grabbed third place, while the Michael Maker trained colt then took the same place in the G2 Calumet Turf Cup S. It was a fine effort as he easily beat fourth Ajourneytofreedom (8-1); moreover, he showed he doesn’t mind the trip much. Four-year-old Ajourneytofreedom even ran in the G2 Belmont Cup Gold Cup S over two miles, finishing third, so he’s also in the mix here. Kentucky Ghost (8-1) is the one emerging from the smaller races to tackle the Grade competition, and due to the fact, he’s met and fought well with interesting horses like In love or Eons, he shouldn’t be disregarded for this race. Still, we’ll see how he handles the trip, which also applies to Another Mystery (15-1). The last to mention is Ry’s the Guy (8-1) trained by Ian R. Wilkes, who seemed to be suited by the turf surface and the distance.

Our betting pick for the Sycamore Stakes is:

Two Emmys due to her latest exploit at the G1 level. He’s been boasting his class for some time, so only the too long trip might stop him, but that we won’t know until Friday.

The three-year-old fillies are about to compete at the G2 level, where $250,000 is up for grabs. 13 participants will cover the distance of 7 furlongs on the dirt surface, while the Grade winners form the leading trio here. William Mott bound Obligatory (3-1) seems to be the one to beat in the Raven Run S, given she’s been showing as a hugely talented filly since the beginning of the season, during which he bagged the G2 Eight Belles S and placed twice at the G1 level. Last time out, Obligatory spent the Cotillion Stakes in the second place, which he also grabbed in the end, bettered only by Clairiere. She’s a gutsy filly; still, her Saturday’s effort could be hindered by the outside draw. Being an offspring of California Chrome, Brett A. Brinkman trained Cilla (8-1) will surely be hugely supported by the fans, and she’s not without a chance here. In 2020, he placed in the G1 Frizette Stakes, and this season, she climbed from the black-type scene to the G2 level by winning the Prioress Stakes at Saratoga.

However, her successes happened at slightly shorter distances. In the Prioress Stakes, Cilla also left Souper Sensational (4-1) behind, while it’s this Mark E. Casses’s charge who might benefit from the seven furlong-trip. Without a hint of doubt, Souper Sensational is a classy filly; moreover, she got one of the inside gates, which could help her, too. The more daunting question she has to answer deals with whether she’s really good enough to match Obligatory at her best.

Regarding the rest of the field, basically, each of the fillies could spring up a surprise. Miss Speedy (6-1) boasted some form when winning the Listed over 7 furlongs with a 2-length advantage, and it seemed she should be capable of repeating such a performance among a stronger competition. Someone Said So (20-1) ran in a Grade race for the first time in September and grabbed second place, while Shalimar Gardens (20-1) and Zainalarab (6-1) displayed some talent when winning in the Allowance and Maiden races, respectively. The latter looks the one to cause an upset here, considering Chad Brown’s horses are on fire once again. Moreover, the filly is just at the beginning of her career, so there’s plenty of room for progress, and a decent run from her could suggest how good Zainalarab actually might be.

Our top pick for the Raven Run is:

Obligatory, for she’s won among the elite and seems slightly classier than Saturday’s field. The wide draw could be a setback, though.

Sunday’s pinnacle welcomes ten three-year-old and older fillies and mares who are about to compete for the purse of $150,000. This G3 turf event held at the distance of a mile and a half attracted a varied field, including G3 winner La Lune () trained by Edward Vaughan. The five-year-old mare spent most of her career in the United Kingdom, where she achieved a G3 triumph at Haydock Park in May, and upon her eighth place in the G2 Lancashire Oaks, she travelled across the ocean and was pointed at a Listed at Kentucky Downs. She ran from the back of the field and almost managed to win her first race in the US; however, she lost to a less-carrying rival by a small margin. Kelsey Danner relies on three-year-old Viburnum (), who will tackle such a competition for the very first time. The progressive filly placed second in an Allowance race in July, and in September, she took the same place among a Listed company. It’s a question of how both of them handle the trip, though.

Luck Money (), a four-year-old filly trained by Arnauld Delacour, also used to run in smaller races; however, she scored a Listed in 2020 and signed off the season with sixth place at the G1 level. It was too much to ask back then, but Luck Money proved to be very useful in the Grade competition, placing second in G3 and running in fourth in a G2, upon which he grabbed the same place in a Listed.

Of course, her most recent effort was disappointing as she lost even to La Lune, but given the distance and Sunday’s company, she should make amends for the performance. Four-year-old Key Biscane () won a black-type race in July, and due to the fact she earned some money in her G2 and G1 outings, she is definitely in the mix here. Moreover, she’s in good form. The only G3 start of Summer In Saratoga () wasn’t a successful one as she finished seventh, but she’s bagged two Listed wins throughout the season, and therefore, she shouldn’t be discarded, while I Hear You () is about to hit the Grade scene for the very first time.

Our free racing pick for the Dowager Stakes is: La Lune, who displayed a particular class in Europe, while her US debut was an encouraging one.

Get a Daily Rebate and make sure to stay tuned for the latest Racing odds, Horse Betting Tips and racing entries.