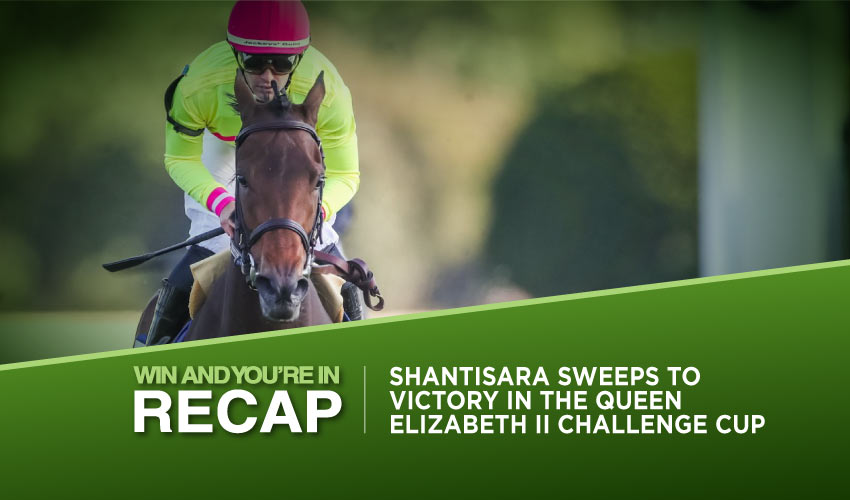 It was a weekend for the distaff side at Keeneland, where Shantisara continued her remarkable progress since coming to the US with a dominant display in the Grade 1 QEII Challenge Cup, and Change Of Control demonstrated her liking for rainy days when storming to victory in the Grade 2 Franklin County. Let’s talk about Keeneland results this weekend.

Chad Brown is in a state of grace at the moment. He has won eight Graded stakes this month, took the Grade 2 Sands Point at Belmont on Saturday with Fluffy Socks, and really made it a day to remember with Shantisara, who routed her field on the way to her first Grade 1 win in the QEII Challenge Cup at Keeneland.

Shantisara ($7.00) was never far from the steady pace set by barnmate Technical Analysis, swept by that filly at the three-sixteenths pole and easily drew off for a commanding five-length victory, a race-record margin, stopping the clock in 1:48 and four-fifths. Technical Analysis held off Burning Ambition by a length and three-quarters to provide Brown – who was winning a record fourth QEII Cup – with the exacta. The favorite Empress Josephine sat behind the pace until the turn before dropping away to finish the last of nine.

“She made a really good move around the turn – she came really handy around there – and when I asked her to make a move she responded well,” said winning jockey Flavien Prat.

Shantisara was running in a minor company in France at the beginning of the year but has been transformed by Brown since shipping Stateside. She is three-for-four in the US, has improved markedly with every start, and could now be a candidate for the Breeders’ Cup Filly & Mare Turf, having won the Jockey Club Oaks at that race’s 1m3f distance.

“I expected her to run really well, she improves all the time,” said Baldo Hernandez, Brown’s assistant. “She’s coming along. This filly has a really good talent.”

When it rains, it pours, which is just how Change Of Control likes it, and she showed her rivals a clean pair of heels on the soft turf in the Franklin County, Friday’s feature at Keeneland.

The five-year-old already had a victory over course and distance on her resume, and doubled up when finishing best of all under Colby Hernandez to catch long-time leader Ambassador Luna at the sixteenth pole, quickening away from there to win by a length and a half in 1:05 and four-fifths, paying off at $14.60. Ambassador Luna kept second by a neck from hot favorite Campanelle, who met plenty of trouble in running.

“She’s been so classy and so talented, and she just gives so much every time we put her in the gate, so I love her very much,” trainer Michelle Lovell said. “She is so honest. I don’t work her every week, she likes to be fresh, so it has worked out well for us.”

Join us at JazzSports and make sure to stay tuned for the latest Keeneland results, odds, and racing entries.

Follow us on Social Media for instant horse racing odds and updates!