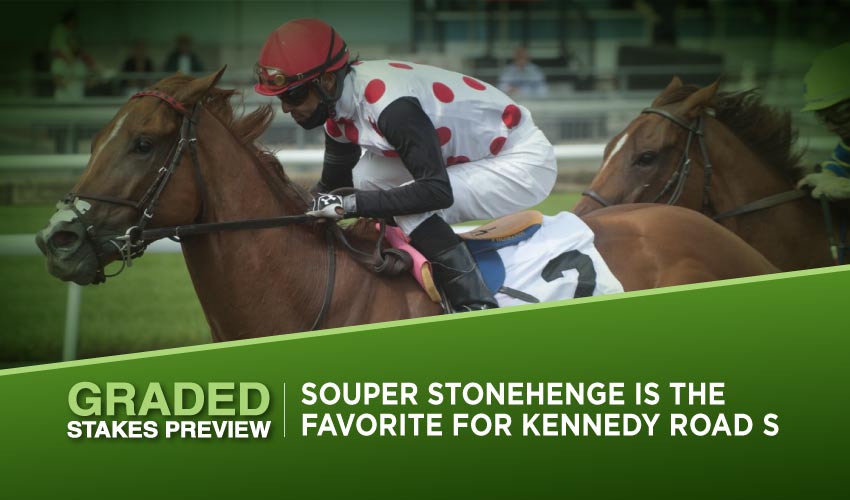 The focus at Woodbine on Saturday is all on Pink Lloyd, the local hero who runs for the final time in the Grade 3 Kennedy Road Stakes. Win or lose, he’ll be the name in the headlines. Sunday’s card at the Toronto track features the Grade 3 Mazarine and the Grade 3 Grey, both full of promising two-year-olds looking to take the next step.

Can he do it? Can the legend that is Pink Lloyd round off his great career in perfect fashion by winning the Kennedy Road, the feature at Woodbine on Saturday?

Pink Lloyd is one of the all-time greats of Canadian racing, Horse of the Year in 2017, an astounding 28-for-37 lifetime, four times champion sprinter, already twice a winner of the Kennedy Road. Now he bows out at Woodbine, scene of all those 37 races, at the age of nine following two wins in his last two starts.

Last time out in stakes company he came out best by a neck after a thrilling stretch duel, and before that led at every call to win the Grade 3 Bold Venture over an extra half-furlong by a half-length. He can’t be getting any faster at his age, but the fight is still there and he’ll need that against old nemesis Souper Stonehenge.

Souper Stonehenge has beaten Pink Lloyd in their last two meetings, by four lengths in the Grade 3 Jacques Cartier – with Malibu Secret three-quarters of a length back in third – and then by three-quarters of a length in the Grade 3 Vigil, both over course and distance. At the revised weights there won’t be much between them, and Souper Stonehenge has almost a four-month absence to overcome while Pink Lloyd is race-fit and ready.

A year ago they were second and third in the Kennedy Road, Souper Stonehenge two lengths ahead but now 7lb worse off. Souper Stonehenge will likely be on or near the pace, Pink Lloyd will be hunting him down. It’s going to be some race.

There are of course others to consider. Souper Stonehenge’s barnmate Tap It To Win is inconsistent but at his best is a formidable opponent, as he showed when beating Mighty Heart in the Grade 3 Seagram Cup over a mile-sixteenth, but the drop in distance here may not help him.

Last month, on his belated first start of 2021, Clayton made all to pip barnmate Lenny K by a nose in an allowance optional claimer over an extra half-furlong here. Lenny K then beat Richiesinthehouse by a neck in an allowance optional claimer over course and distance; all three have claims to hit the board, as does Smokin’ Jay, winner of a Belmont Park stakes on turf at this distance two starts ago.

The stage is set for another duel between old friends in the Kennedy Road. With race fitness on his side, PINK LLOYD is the choice to add one last victory to his great record.

There are several stakes winners looking to take the step up in the Grey, with The Minkster the morning-line choice following his victory here four weeks ago over nine furlongs.

He was always near the pace before taking over on the turn and drawing off in the stretch to win by two and a quarter lengths, with Shamateur and God Of Love around three lengths further back in fourth and fifth. That was a strong performance, especially as God Of Love – the best-fancied of Casse’s three in the gate – had previously won a stakes race over course and distance on turf, with Shamateur fifth.

Another with black-type to his name is Hinksy, who landed a stakes here over seven furlongs when collaring Ironstone inside the last sixteenth and going on to win by three-quarters of a length, with Heat Merchant a length back in fourth.

Churchtown got it right first time when winning a maiden here over six and a half furlongs, strolling home by four and a half lengths. He’s one to watch, as is International, another French raider with better credentials than his stablemate in the Mazarine. He won a handicap at Deauville over nine and a half furlongs last time out, and that big-track form reads well here.

The Grey is closely contested, with five or six colts having the right profile to step up. Stakes winner HINKSY, who should appreciate the longer distance, is the selection.

With four runners, trainer Mark Casse has almost half the field for the Mazarine at Woodbine on Sunday, with Aubrieta reckoned his leading contender after her authoritative success in a stakes over seven furlongs here four weeks ago.

Aubrieta looked resolute through the closing stages when getting home by two lengths that day, with Chocolateaddiction a neck back in third, and the extra distance should be well within her grasp given the way she finished off her race.

Casse’s second-string Mrs Barbara was still a maiden when a never-nearer six-length fourth in the Grade 1 Natalma here over a mile on turf – with Guileful a well-beaten sixth – and got her first win at the fifth attempt over course and distance last time out. Barnmate Queen Judith finished tenth in the Grade 2 Jessamine over a mile-sixteenth at Keeneland last month but was beaten less than four lengths in a blanket finish, so warrants respect here.

Winning a stakes race on debut is very rare, so the achievement of Moira in doing so, coming home more than four lengths clear over course and distance, must not be underestimated, although that means she must concede weight all round.

Course-and-distance maiden winner Kanta is likely to move up with that under her belt, while French raider Sake has won only a little maiden at provincial Moulins, so her chance is not obvious although the distance should pose no problems.

There are some very promising fillies in the Mazarine and none more so than MOIRA, whose stakes win on her debut stamps her as something out of the ordinary.

Sign up and get a 10% rebate. Make sure to stay tuned for the latest Horse Racing Odds, races results and racing entries.