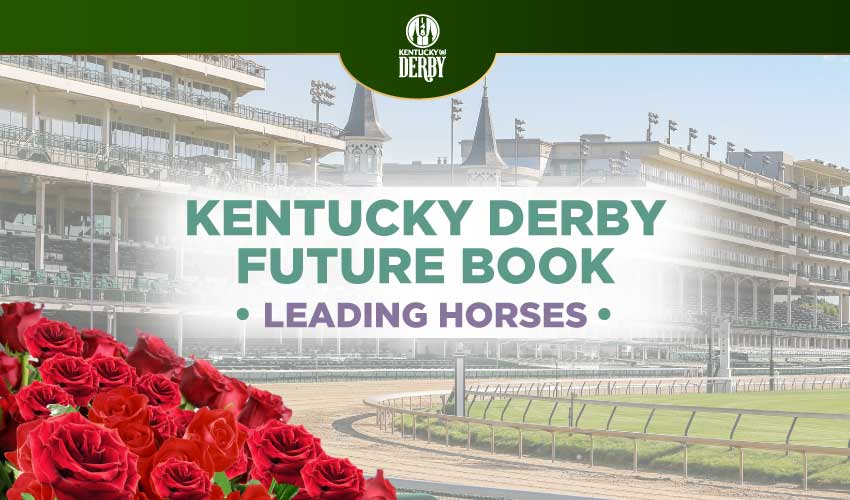 Over the next three weeks we travel the crucial last few miles on the Road to the Kentucky Derby, in a series of preps that will confirm the likely final field and narrow down the list of the future book leading horses for the big one at Churchill Downs on May 7.

In our weekly look at the Kentucky Derby scene, we go through the future book leading horses before they face their biggest tests so far.

*Horses trained by Bob Baffert have not been included, as they are unlikely to run in the Derby

Won G2 San Felipe, G2 San Vicente, both at Santa Anita; unbeaten in two this year, a powerful front-runner who stays a mile-sixteenth, although pedigree suggests stamina may be an issue; will try nine furlongs in G1 Santa Anita Derby.

Won G2 Tampa Bay Derby, G3 Sam F Davis, both at Tampa Bay Downs over a mile-sixteenth; unbeaten in two this year, very effective on the lead but yet to post a big speed figure; next stop the G1 Blue Grass at Keeneland.

Runner-up G2 Risen Star at the Fair Grounds; good form at two and showed he retained it when a strong closer on first start of 2022, although next run is crucial; stays a mile-eighth and has won at Churchill Downs; aimed at the Blue Grass.

Won G2 Risen Star at the Fair Grounds over a mile-eighth; another front-runner heading for a Derby that may be crowded with speed; has won at Churchill Downs; runs in G2 Louisiana Derby over nine and a half furlongs on Saturday.

Won G2 Fountain of Youth at Gulfstream Park, has never run anywhere else; two-for-three in 2022 and has improved since tactical change away from front-running; stays a mile-sixteenth and will try nine furlongs in G1 Florida Derby.

Third in G3 Holy Bull at Gulfstream Park; doing best work late there on first start of 2022 and this tough, strong stayer will appreciate return to a mile-eighth and probably further; pointed towards nine-furlong G2 Wood Memorial at Aqueduct.

Won G3 Gotham at Aqueduct, unbeaten in three, all at the Big A; pressed the pace there and kept on well but that was a mile and suspicions remain about extent of stamina; important examination coming up in Wood Memorial.

Won G3 Holy Bull at Gulfstream Park, all three wins have been at the Miami track; comfortable score against strong opposition over a mile-sixteenth and running style suggests further will suit; next stop the Florida Derby.

Third in G2 Risen Star at the Fair Grounds; broke poorly there and did well to rescue the situation, finishing his race off well; gritty type and stays a mile-eighth, although has only won a maiden; needs a big effort in the Blue Grass.

Won a maiden at Gulfstream Park over a mile; unraced as a juvenile, one-for-two lifetime and that easy all-the-way victory, allied to his big home reputation, has got him exposure; big step up for stakes debut in a hot Florida Derby.

Won G3 Withers at Aqueduct; unbeaten in two, both at the Big A, and blitzed the field from the front in an impressive display, although it wasn’t the strongest of contests; stays a mile-eighth but improvement required in Wood Memorial.

Sixth in G2 Fountain of Youth at Gulfstream Park; fine form as a juvenile was not repeated on first run back after injury, never in the race with a chance; is capable of better but doubts remain ahead of shot at the Louisiana Derby on Saturday.

Fourth in G2 Fountain of Youth at Gulfstream Park; lost unbeaten record on stakes debut when unable to dig in through the stretch; profile is built on reputation rather than achievement; stretches out in the Florida Derby and has to get it right.

Runner-up G2 Fountain of Youth at Gulfstream Park; did all his best work late on stakes debut and likely to appreciate step up from a mile-sixteenth; improvement can be expected and the Florida Derby will tell us a lot more.

Won allowance optional claimer at Oaklawn Park; unbeaten in two and stays a mile-sixteenth, pressing the pace latest before drawing away to win by ten lengths; big potential and makes stakes debut in the Louisiana Derby on Saturday.

Third in G2 Rebel at Oaklawn Park; kept on well in closing stages to hint he can go further than a mile-sixteenth; has won at Churchill Downs but is zero-for-four in stakes and has to show much more in Arkansas Derby.

Runner-up G2 Rebel at Oaklawn Park; maiden winner at a mile-sixteenth, caught close home on stakes debut and liable to do better, but it wasn’t a hot race and he needs to show plenty more; next target is the Blue Grass.

Won G3 Honeybee at Oaklawn Park; very promising filly on a three-race streak at Oaklawn, stays a mile-sixteenth and will probably get further judged on wide-margin success; faces a stern test against males in the Arkansas Derby.

Won allowance optional claimer at the Fair Grounds over mile-sixteenth; two-for-five lifetime and well beaten only start in stakes company; may lack class but has final shot to prove he can make the grade in the Arkansas Derby.

Third in G2 Tampa Bay Derby over mile-sixteenth; flattened out in the stretch and slightly disappointing after promise of previous outing; has won at a mile and that might be his distance; will try to stretch out in the Florida Derby.

Won allowance optional claimer at Oaklawn Park over mile-sixteenth; unraced as a juvenile, unbeaten in two, both at Oaklawn, and recent five-length win hints at a promising future; makes stakes debut in the Arkansas Derby.