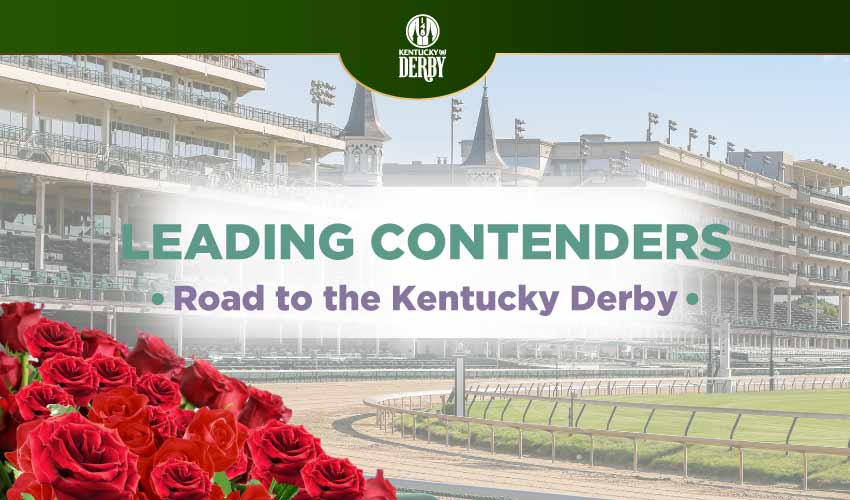 Here we look again at the Kentucky Derby leading contenders in the betting market for America’s greatest race, now just four months away. As 2021 becomes 2022 and two-year-olds become three-year-olds, the Kentucky Derby and the ‘road’ leading to it are on the mind of everyone with a stake in the sport.

The Road to the Kentucky Derby is a long road with many side turnings, and right now – if it were a real road, the I-90, say – it is going through a phase characterized by not very much, a long open stretch of countryside in which the scenery barely changes from one hour to the next.

Part of that is to be expected. The Road to the Kentucky Derby races are worth only ten points to the winner at the moment, low-hanging fruit that entitle those winners to absolutely nothing save for a place in the pending file. Ten points is neither here nor there when it comes to the final gate positions in the Kentucky Derby, and until the big points start to become available, beginning with the 50pt Grade 2 Risen Star at Fair Grounds on February 19, then we’re all playing the waiting game.

The other reason that we’re all staring out of the car window at the empty, endless miles is the Bob Baffert situation, which as everyone knows means that his horses can neither gather Kentucky Derby leading contenders points nor be under consideration for the big one at Churchill Downs. Uncertainty is the death-knell for bettors, and with four Baffert horses in the top dozen of the Jazz future book there are too many unknowns in play for even the hardiest player to make a confident assessment.

More information should become available after Baffert’s NYRA hearing on January 24, which may have a bearing on his Churchill Downs suspension, and with the big-point RTKD races extending into the middle of April there’s plenty of time for the picture to change. But for the next 200 miles, there’s nothing much to see.

Bob Baffert’s recent record in the Grade 3 Sham at Santa Anita simply screams Kentucky Derby, and last week’s winner Newgrange duly takes his place in the upper reaches of the betting market. He was impressive on his first start at a mile but the race was set up to suit him, as he was allowed to set slow fractions before quickening up. As Newgrange moves into focus, barnmate and Sham runner-up Rockefeller recedes from view, his position in the pecking order at home and in public taking a hit.

In the same conglomerate ownership as Newgrange is barnmate Doppelganger, an easy winner on debut at Los Alamitos in December when he drew off in the stretch to score by three and a half lengths. He ran the six furlongs there in a good time and may be asked to move up in the Grade 3 Robert B Lewis at Santa Anita on February 6, although Baffert will have several candidates for that race.

The Gun Runner at Fair Grounds last month gave Churchill Downs maiden winner Epicenter the opportunity to stake a claim and he took it very well, steamrolling the opposition to the tune of six and a half lengths and taking his record to two-for-three. Trainer Steve Asmussen will now send the colt on the path trod last year by stablemate Midnight Bourbon and point him at the Grade 3 Lecomte – back at the Fair Grounds – on January 22, which is the next points race in the RTKD series.

No changes at the top

The head of the market remains occupied by unbeaten Breeders’ Cup Juvenile winner Corniche, who has been having a spell away from the barn at WinStar Farm in Kentucky. No comeback race has been mooted for the $1.5m Quality Road colt, which is also the case for long-term absentee and long-term Derby fancy Jack Christopher. That colt is expected to begin breezing again this month in Florida, so the Fountain Of Youth or the Tampa Bay Derby – both run in early March – could figure on his schedule.

Others whose position in the upper levels of the ante-post market have been unaffected by their absence from the track include three-race maiden Commandperformance, last seen when fourth in the BC Juvenile behind Corniche, and Grade 1 winner Rattle N Roll, who missed the BC Juvenile with a foot abscess and has been galloping at Gulfstream Park.

Also in that group is BC Juvenile runner-up and current RTKD points leader Pappacap, who is likely to run in the Grade 3 Lecomte at Fair Grounds on January 22 before potentially taking his chance in the aforementioned Risen Star at the same track.

Firmly in the big-race mix

Those who have staked a claim since the Breeders’ Cup include unbeaten second-favourite Smile Happy, who leads what is now a quartet of hopefuls for trainer Kenny McPeek and won the Grade 2 Kentucky Jockey Club at Churchill Downs in November. He had his first timed work at Gulfstream Park on New Year’s Day, and the Grade 3 Southwest at Oaklawn Park on January 29 or the Grade 3 Holy Bull at Gulfstream the following week could be part of his schedule.

The one-two from the Grade 2 Remsen at Aqueduct in December, Mo Donegal and Zandon, have established themselves in the top dozen of the future book while other trials have taken place around them, but there has been no confirmation about the next port of call for either colt. Mo Donegal is a barnmate of Commandperformance, and trainer Todd Pletcher has a host of Derby possibles to spread out among the trials. Zandon is trained by Chad Brown, and is his second-string behind the soon-to-return Jack Christopher.

Grade 3 Bob Hope winner Messier then finished runner-up in the Grade 2 Los Alamitos Futurity, but is still a shorter price in the future book than 45-1 chance Slow Down Andy, the horse who beat him at the California circuit. Messier is arguably Baffert’s second-string at the moment, although such a position is open to flux given the volatile state of current circumstances.