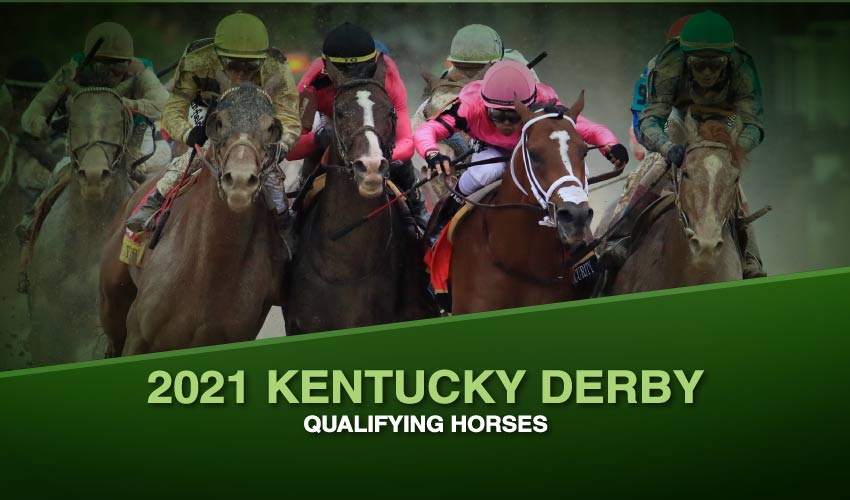 The Road to the Kentucky Derby is heating up despite some setbacks on the qualifying races schedule. While the Grade 3, $750,000 Southwest Stakes was rescheduled for a second time to Feb. 21, races like the $400,000 Risen Star Stakes and $100,000 El Camino Real Derby did award qualifying Derby points last weekend.

Here is a look at the 24 favored horses at this point on the Road to the Kentucky Derby:

The Hard Spun colt is receiving a lot of attention lately. Trained by Brad Cox, he scored 10 qualifying points with his win in the Jan. 22 Smarty Jones Stakes at Oaklawn.

He has two wins and two runner-up efforts from four career starts, and his purse earnings sit at $166,092.

Trained by Hall of Famer Bill Mott, the Candy Ride colt is coming off a big victory in the Feb. 6 Sam F. Davis Stakes (G3) at Tampa Bay Downs. In that outing, he scored 10 Kentucky Derby qualifying points. He has two victories from three starts and has earned $144,824.

Also trained by a Hall of Famer in Bob Baffert, Concert Tour is a Street Sense colt. He has a perfect record of two wins from two starts, which included the Feb. 6 San Vicente Stakes (G2) at Santa Anita. The colt’s earnings are at $156,600.

With just one victory from one career start, which came in a Feb. 7 maiden special weight race at Santa Anita, Dream Shake still needs to prove himself at the graded stakes level. A Twirling Candy colt, he has $36,600 in purse earnings.

Godolphin’s Essential Quality has consistently been one of the top names. The Tapit colt is trained by Brad Cox and has a perfect three-for-three record.

Despite his longshot odds, the Declaration of War colt has an impressive record. He is 3-0-0 from four starts, with the most recent being a victory in the Nov. 6 Breeders’ Cup Juvenile Turf (G1) at Keeneland.

He also took the Oct. 3 Pilgrim Stakes (G2) at Belmont and the Sept. 2 With Anticipation Stakes at Saratoga. His earnings are at $657,932.

Another Baffert-trained runner, this Violence colt has one win and one second from two starts. He finished second in the San Vicente Stakes (G2), where he demonstrated solid speed with a 105 Speed Figure. His total earnings sit at $73,000.

Calumet Farms’ Greatest Honour scored the Jan. 30 Holy Bull Stakes (G3) at Gulfstream Park, where he was awarded 10 Kentucky Derby qualifying points. He is 2-1-2 from five starts with earnings of $175,240.

The Into Mischief colt owned by Klaravich Stables has not raced since Nov. 6, when he won the Nyquist Stakes at Keeneland. He has a career record of 2-1-0 from three starts, and his purse earnings sit at $124,050.

Trained by Doug O’Neill, the Oxbow colt is coming off a third-place run in the Jan. 30 Robert B. Lewis Stakes (G3). His other big performance was a runner-up effort in the Nov. 6 TVG Breeders’ Cup Juvenile (G1) at Keeneland.

The Maclean’s Music colt is trained by one more Hall of Famer in Steve Asmussen. He has four wins from five career starts, and his purse earnings sit at $502,564.

He ran fourth in the Breeders’ Cup Juvenile (G1) last time out. His big wins include the Sept. 7 Runhappy Hopeful Stakes (G1) and Aug. 7 Saratoga Special Stakes (G2) at Saratoga.

Keepmeinmind’s last race came back on Nov. 28 when he won the Kentucky Jockey Club Stakes (G2) at Churchill Downs ahead of Smiley Sobotka. The Laoban colt also finished third in the Breeders’ Cup Juvenile (G1) behind Hot Rod Charlie and second in the Oct. 3 Claiborne Breeders’ Futurity (G1) at Keeneland.

Trained by Baffert, Life Is Good is another Into Mischief colt among the Derby favorites. He has a perfect two-for-two record and purse earnings of $94,200.

He took the Jan. 2 Sham Stakes (G3) last time out at Santa Anita to win 10 qualifying Derby points. He demonstrated an impressive 110 Speed Figure in that race.

One more Into Mischief colt, the Brad Cox-trained Mandaloun is coming off a big win in the Feb. 13 Risen Star Stakes (G2), which awarded him 10 Kentucky Derby qualifying points. He also finished third in the Jan. 16 Lecomte Stakes (G3) at Fair Grounds. He is 3-0-1 from four races and has purse earnings of $351,252.

Medina Spirit, another Baffert entrant, has raced twice in 2021. The Protonico colt was the victor of the Robert B. Lewis Stakes, beating Roman Centurian to take 10 Kentucky Derby qualifying points. He also finished second to Life Is Good in the Sham Stakes (G3).

The Tiznow colt trained by Steve Asmussen is 2-1-3 from six starts, and his purse earnings are at $261,420. He finished third in the Risen Star Stakes (G2) to take four qualifying Derby points. That race followed his victory in the Lecomte Stakes (G3).

With his runner-up effort in the Sam F. Davis Stakes (G3), The Bill Mott-trained Nova Rags took four qualifying Derby points. He also won the Jan. 16 Pasco Stakes at Tampa Bay Downs. He is 2-1-0 from four races with purse earnings of $110,650.

Godolphin’s Prevalence is a Medaglia d’Oro colt trained by Brendan Walsh. He has just one career start, which was a Jan. 23 maiden special weight victory at Gulfstream Park.

Trained by Chad Brown, Klaravich Stables’ Risk Taking is 2-0-0 from four starts with purse earnings of $182,530. Another Medaglia d’Oro colt, his most recent performance was a victory in the Feb. 6 Withers Stakes (G3), which awarded him 10 qualifying Derby points.

With his latest run being a second-place finish in the Robert B. Lewis Stakes (G3), the Empire Maker colt scored four qualifying Derby points. Trained by Simon Callaghan, he is 1-1-0 from three starts with purse earnings of $60,020.

The Mineshaft colt trained by Todd Fincher had high hopes going into the Risen Star Stakes (G2), but he could only finish fifth among the field. Prior to that, he scored the Dec. 18 Remington Springboard Mile Stakes at Remington Park.

Another one of Steve Asmussen’s runners, the Uncle Mo colt has a perfect two-for-two record and purse earnings of $78,600. Despite his impressive record, the runner has yet to run in a stakes race, with his victories coming in allowance and maiden special weight events.

The last runner on the list is the Nyquist colt trained by Doug O’Neill. His lone 2021 performance was a maiden special weight victory at Santa Anita. He closed out his 2020 campaign with a runner-up performance in the Dec. 19 Los Alamitos Futurity (G2) at Los Alamitos Thoroughbred.

There are other 3-year-old runners that could make their way into the Derby, with many more qualifying races still set to offer points.