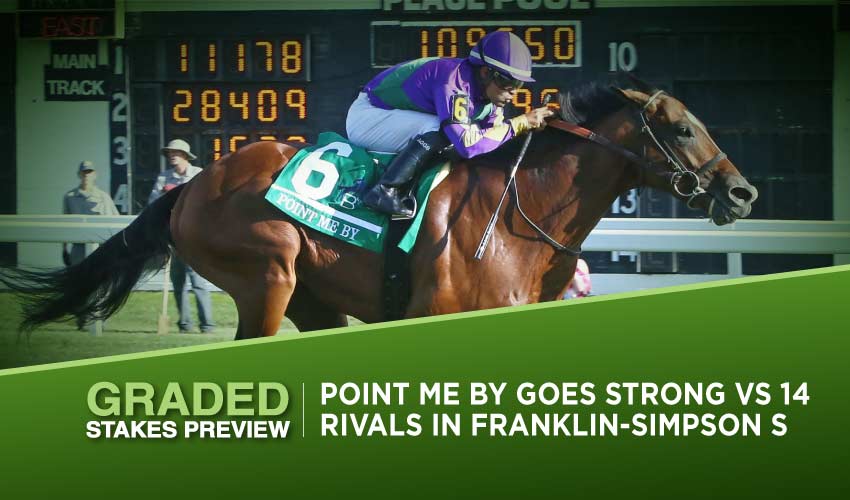 The key to this complex puzzle of three-year-olds improving at different rates, run at the equally complex puzzle of Kentucky Downs on Saturday, may be the Grade 2 Hall Of Fame Stakes at Saratoga last month, won by Public Sector.

The form was given a big boost by Public Sector’s recent follow-up in the Grade 3 Saranac, which draws the eye to those following him home in the Hall Of Fame. Runner-up there was Annex (9-2), spotting the winner 4lb, with Next (5-1) – also conceding 4lb – in fourth place and Easy Time (15-1) fifth.

The margin between Annex and Next was three lengths, all of which was given up by the front-running Next after the eighth pole, suggesting that the drop in distance could help him stay ahead this time in a race that features several horses coming back from a mile to this intermediate distance.

One of those is Point Me By (7-2), who achieved the considerable feat of winning a Grade 1 on his third lifetime start when drawing off for a comfortable score in the Bruce D at Arlington, although it must be said that it was possibly the weakest Grade 1 of the year.

The inexperienced Point Me By no doubt has improvement to come, but he’ll need it here, and the disparity between his odds and those of Bruce D runner-up Tangotangotango (20-1) seems excessive. Tangotangotango won the Listed American Derby on his previous start and looks a gift for board players at his odds, with Bruce D fourth King Of Miami (20-1) seemingly held.

County Final (8-1) will come on for his first outing of 2021, at Woodbine last month, and could break into the mix, while The Lir Jet (12-1) and Miss Amulet (15-1) both make their first start Stateside after moving from Britain/Ireland, and both must rebound after completely losing their strong two-year-old form.

Miss Amulet, slightly the better of the two and third in the Breeders’ Cup Juvenile Fillies Turf, has been more highly tried and may fit in well here, while The Lir Jet has been gelded and the concern is that he was just an early juvenile – hasn’t won since second lifetime start – and has little more to offer at this level. Prediction Next (Tango tango tango to show)

She usually has her name in lights, and Princess Grace (2-1) looks more than capable of taking her record to six-for-seven lifetime with this drop in grade.

Her victory in the Grade 2 Yellow Ribbon at Del Mar last time out was her third straight in graded company, and in beating subsequent Grade 2 runner-up Dogtag (receiving 3lb) by a comfortable length and a quarter Princess Grace emphasised both her talent and her wellbeing. She spots weight to all save for Dalika (9-2), fifth in the Grade 2 Glens Falls following a Grade 3 strike at Delaware Park, but has earned that right and will be difficult to beat.

Grade 1 winner Abscond (4-1) picked up that tag in the Natalma at Woodbine, but that was a full two years ago and she hasn’t won in eight starts since. She closed late to be runner-up in the Grade 2 Nassau back in Toronto last time out, but must step up on that to break her losing streak here. She’sonthewarpath (8-1) is in sizzling form but takes on better horses now than in her two recent wins at Ellis Park, in the latest of which she beat Princess Causeway (12-1) three-quarters of a length into third. Summer In Saratoga (12-1) comes off victory in a Listed event at Indiana Grand and has the benefit of winning form here, although that was only an allowance optional claimer.

The pace angle is likely to come from Shifty She (6-1), whose front-running schtick has paid off pretty well in Florida but came unstuck in a black-type affair at Saratoga latest, and the suspicion is that she’ll just be a good rabbit for Princess Grace to run down. Prediction Princess Grace

Form in the book is only one factor in handicapping, albeit a large one alongside other elements such as course, distance, surface and barn wellbeing, but on the basis of form there is only one place to look in the Ladies Sprint.

Venetian Harbor (3-1) has only once been out of the first two (in the Breeders’ Cup) in ten races, has won three Grade 2s and been runner-up in three Grade 1s, latterly behind Shedaresthedevil in the Clement Hirsch at Del Mar. She came back to turf two starts ago in the Grade 2 Monrovia at Santa Anita over today’s distance and showed that she’s just as good on the weeds, going wire-to-wire for an easy success.

That day she beat Santa Anita specialist Constantia (5-1) by three and a half lengths, Superstition (4-1) by five and She’s So Special (15-1) by plenty more. The consistent Superstition franked the form next time out when winning a black-type at Del Mar and it’s quite a puzzle why Venetian Harbor’s morning-line odds are so generous.

She could face a challenge for the lead from Jeanie B (6-1), who almost made it all the way home in the Grade 2 Royal North at Woodbine but was beaten a nose, but has a distinct class edge on that rival, as she does over another pace factor in Ellis Park black-type winner Yes It’s Ginger (12-1), who has been in good order during 2021 and could hit the board if the fractions aren’t too sharp. Jakarta (12-1) has a win here on her record but has drawn a blank in six starts this year; Violenza (20-1) has also been successful here and was the narrow winner of a black-type at Colonial Downs last time out; Catch A Bid (8-1) comes off a recent win but only at little Mountaineer Park. Look everywhere, but there’s still only one place to look. Prediction Venetian Harbor.