Kimari comes up trumps in 2022 Honorable Miss at Saratoga 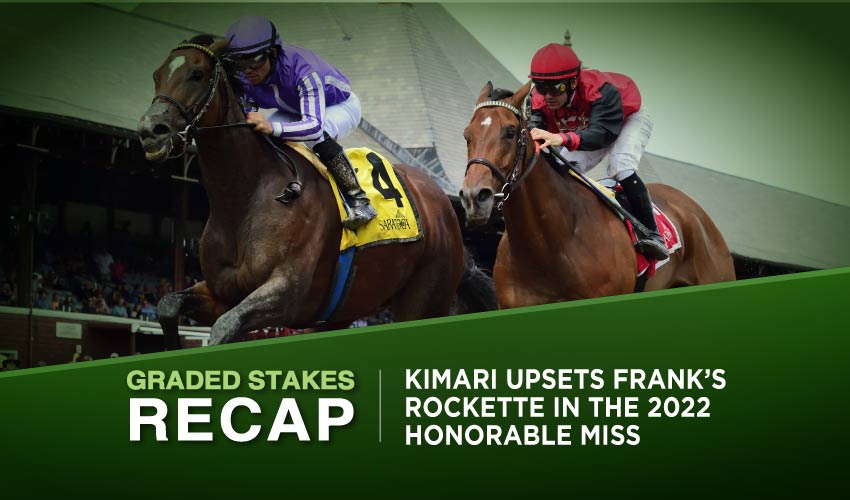 There was a short field and a short-priced favorite in the G2 Honorable Miss at Saratoga on Wednesday, but the fillies’ sprint didn’t go to script as Kimari sprang a mild upset, outduelling the tenacious Frank’s Rockette in the closing stages for a narrow victory.

There were just four runners in the Honorable Miss, the feature event at Saratoga on Wednesday, but you only need two to make a horse race and between them, Kimari and Frank’s Rockette served up a thriller.

A lot of the talk and most of the money had been about 3-5 favorite Bella Sofia, but she was never a factor in a race run at a brisk pace with the outsider Amadevil breaking on top and setting the fractions. Frank’s Rockette surged through on the rail around the turn and opened up a clear lead in mid-stretch, but Kimari was making steady progress down the center of the track and the 3-1 third-choice caught the leader with five strides to run, getting it done by a half-length in a time of 1:10 and four-fifths.

A lacklustre Bella Sofia was five and three-quarter lengths back in third, while Amadevil stopped to a walk in the stretch and was vanned off.

“She ran good,” said winning jockey Joel Rosario. “She’s a nice horse and always tries. She responded to everything I asked her to do.”

This was a welcome return to form for Kimari, who last time out ran arguably the worst race of her career when fifth in the G1 Derby City Distaff at Churchill Downs in May. The victory took her record to an enviable eight-for-15, with last year’s G1 Madison at Keeneland the jewel in her crown, and the result may have been unexpected for some but trainer Wesley Ward was not among them.

“I was pretty confident,” he said. “It just worked out great, and it’s always great to stand in the winner’s circle after a Graded race at Saratoga. There’s nothing like it.

“I just thought the race set up for her today, especially drawing the outside post. It gave Joel a nice easy run down the backside, he didn’t have to maneuver his way out, and I think that was the key.”

Bella Sofia did at least keep up her record of only missing the board once in her career, but that was scant consolation for such a dismal display. Two starts earlier she had beaten Frank’s Rockette in a similarly enthralling stretch duel in the G3 Vagrancy at Belmont Park, but she came up empty this time.

“She had been training well,” said disappointed trainer Rudy Rodriguez. “But it is what it is. She just got beat. We’ll regroup.”

The next target for Kimari is expected to be the G2 Thoroughbred Club of America over six furlongs at Keeneland on October 8, with that race serving as a springboard to the G1 Breeders’ Cup Filly & Mare Sprint, over seven furlongs at the same track, four weeks later.

Follow us on Social Media for more 2022 Honorable Miss updates!