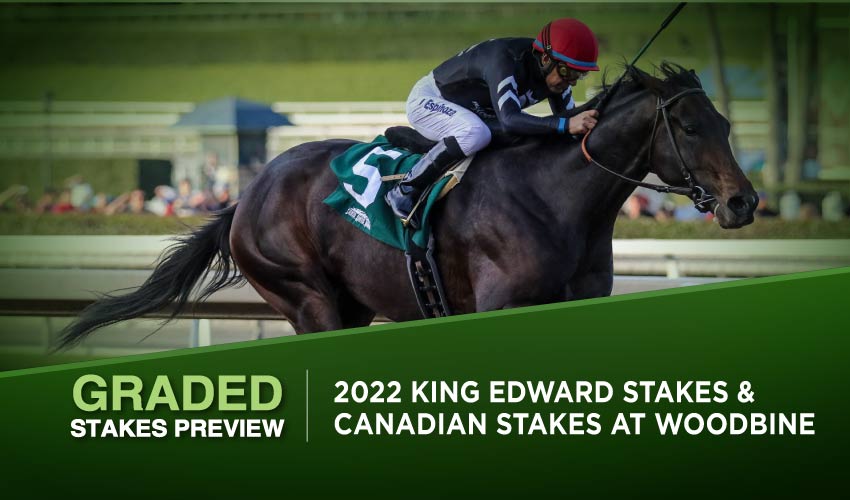 Two very competitive Graded stakes light up the undercard at Woodbine on Sunday, with the G2 King Edward featuring a rematch between Connaught Cup one-two Filo Di Arianna and March To The Arch, and the G2 Canadian Stakes bringing together G2 winner Crystal Cliffs and the progressive British import Fev Rover.

Brazil is a very different country from Canada but they seem to come alike to Filo Di Arianna (2-1), who bids to continue his love affair with Woodbine in the King Edward, the highlight of Sunday’s card at the Toronto track.

The South American star is three-for-three here, all over seven furlongs, two in allowance grade and then making the step up in last month’s G2 Connaught Cup, in which he led at every call and extended his lead through the stretch to beat his rallying barnmate March To The Arch (8-1) by two and a half lengths, with the disappointing Shirl’s Speight (5-2) two lengths further back in fifth after never getting involved in the action.

The big question for Filo Di Arianna is whether he can show the same form when stretching out to a mile for the first time, against horses who are proven at that distance. March To The Arch won the King Edward in 2020 and was third a year ago, while Shirl’s Speight has been in grand form below the border in 2022, with the high point his victory in the G1 Maker’s Mark Mile at Keeneland in April. His Connaught Cup eclipse was a blip in an otherwise very progressive profile and could be a throwout.

Town Cruise (6-1) was runner-up in this race 12 months ago – a head ahead of March To The Arch – and followed that by going gate-to-wire to win the G1 Woodbine Mile by a comfortable two and a quarter lengths. He returned from a nine-month layoff when eighth in a ten-furlong stakes here last month, looking in need of the outing over a distance well beyond his optimum, and should be a much stronger proposition today.

This is the first time on turf for Weyburn (4-1), winner of last year’s G3 Gotham at Aqueduct. He won a seven-furlong stakes at Gulfstream Park on his first start of 2022 but has been below that form in three subsequent starts, and his supporters will be relying on the switch to the lawn to rekindle his old sparkle.

Barnmates Haddassah (12-1) and Harlan Estate (10-1) have plenty of history, beginning with all three legs of last year’s Canadian Triple Crown, notably when running one-two in the Prince of Wales at Fort Erie on dirt, separated by a half-length. They met again in June, in an allowance optional claimer over course and distance on turf when Harlan Estate had the call, beating Haddassah into third by two and three-quarter lengths. Both have won AOCs since but will need career-bests to make their presence felt today.

Last year’s runner-up TOWN CRUISE can go one better, as he will come on a ton for his first run off a nine-month layoff.

European form often holds the key on turf and, unusually, two of the leading contenders for the Canadian locked horns in the same race at Royal Ascot last year.

Both Fev Rover (5-2) and Flirting Bridge (4-1) were longshots when running sixth and seventh – a length and three-quarters apart – in a particularly hot renewal of the G1 Coronation, won by multiple G1 heroine Alcohol Free on a muddy track. That wasn’t the catalyst for great things – Fev Rover hasn’t won a race for exactly two years, an eight-race losing streak – but both fillies have good claims today.

On her first start on this side of the Atlantic and her first in eight months, Fev Rover made a bold bid to lead throughout in the G2 Dance Smartly here over a mile-sixteenth last month, ending up second best but still a head clear of last year’s Woodbine Oaks winner Munnyfor Ro (8-1). She is likely to move up with that under her belt.

Flirting Bridge clicked on her first start Stateside, winning an allowance at Churchill Downs in May, and ran well when upgraded next time to be runner-up in the G3 Dr James Penny Memorial at Parx over a mile-sixteenth. More is required here but she’s certainly heading in the right direction, and she gets Lasix for the first time.

Christophe Clement trained the winner of last year’s race and is represented this time by Crystal Cliffs (2-1), who has never missed the board in her life and made her first visit to Canada a successful one when dead-heating for the G2 Nassau here over a mile last month. She was rallying gamely there, hinting that today’s extra yardage will help rather than hinder, and she already has a victory over a mile-sixteenth – in a stakes at Gulfstream Park – under her belt.

Argentinian import Bellagamba (6-1) was a G1 winner at home but has never run in Graded company in the US. Last time out she ran her best race since moving north when winning a mile-eighth stakes at Laurel Park, keeping on well late to win by a length and a half, and is certainly worth a try in this better company.

Twelve months ago Barkin (20-1) was third in this race, but has failed to match that level of form in four starts since and it’s hard to see her repeating that performance, while Angelou (12-1) was a comfortable winner of an allowance optional claimer over today’s distance on the synthetic surface here but has been found a tough spot to make her stakes debut.

Fev Rover’s barnmate Keyflower (10-1) is only one-for-nine in stakes and that sole victory came in a very minor contest in the French provinces. She hasn’t really got her act together in the US and looks very much a second-string.

It’s been two years since FEV ROVER won a race, but her strong showing in a G2 here last time suggests she can end her barren spell.