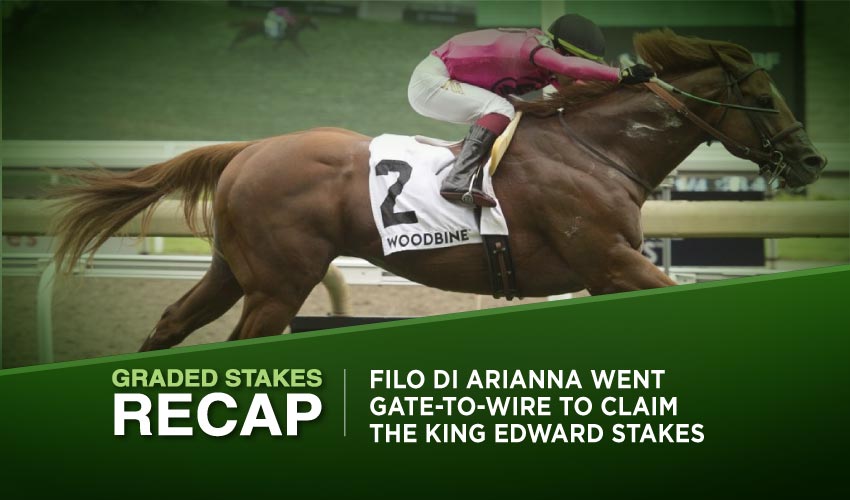 Mark Casse had another day to remember at Woodbine on Sunday, winning both Graded stakes with overseas imports. The ex-Brazilian Filo De Arianna kept his unbeaten record at the Toronto track intact when an easy winner of the G2 King Edward Stakes, while Fev Rover – formerly trained in Britain – prevailed after a thrilling stretch duel in the G2 Canadian, getting off the mark in her adopted country.

Filo goes all the way

The streak goes on. Filo Di Arianna took his winning run to three and his unbeaten record at Woodbine to four when going gate-to-wire in the King Edward on Sunday.

The ex-Brazilian six-year-old – who missed the whole of 2020 and ran just once last year – broke on top under Kazushi Kimura and set only boilerplate fractions while pressed closely by Town Cruise, but the 6-5 favourite shook off that rival with three-sixteenths to run and motored clear.

The outsider Harlan Estate came out of the pack along the rail but could never land a blow, and Filo Di Arianna hit the line two lengths clear in a time of 1:34 and three-fifths. Third-choice Haddassah was third, a length and three-quarters away, in a race reduced to six by the late scratch of the well-fancied Shirl’s Speight.

This victory, coming on the heels of success in the G2 Connaught Cup, took Filo Di Arianna’s resume to seven-for-nine and he will get a chance to nail that elusive G1 label next time out, as trainer Mark Casse is expected to point him towards the $1m Woodbine Mile – a win-and-in for the Breeders’ Cup Mile – on September 17. He is unbeaten since adopting front-running tactics.

Mark Casse signed for a double in the Graded stakes on the Queen’s Plate undercard when British import Fev Rover stuck her head in front in the last stride to take the Canadian, snapping a losing run that stretched a day short of two years.

The four-year-old cost current connections almost a million dollars at the year-end sales in Britain, and paid back the first instalment with a gutsy success. The 9-2 third-choice, partnered by Patrick Husbands, sat behind the pace set by Angelou until moving up to dispute matters exiting the turn.

She was soon on the lead but was immediately challenged by the favourite Crystal Cliffs, and the pair duked it out to the line in a thrilling finish, with Fev Rover in the right place at the right time to score by a nose, stopping the clock in 1:47 and one-fifth. Second-favourite Flirting Bridge was just three-quarters of a length back in third.

Fev Rover’s hefty price-tag was merited considering her record in Europe, which included a third-place in the classic G1 1,000 Guineas at Newmarket and victory in the G2 Prix du Calvados at Deauville. She has taken well to life in Canada – on her debut last month she was runner-up in the G2 Dance Smartly.