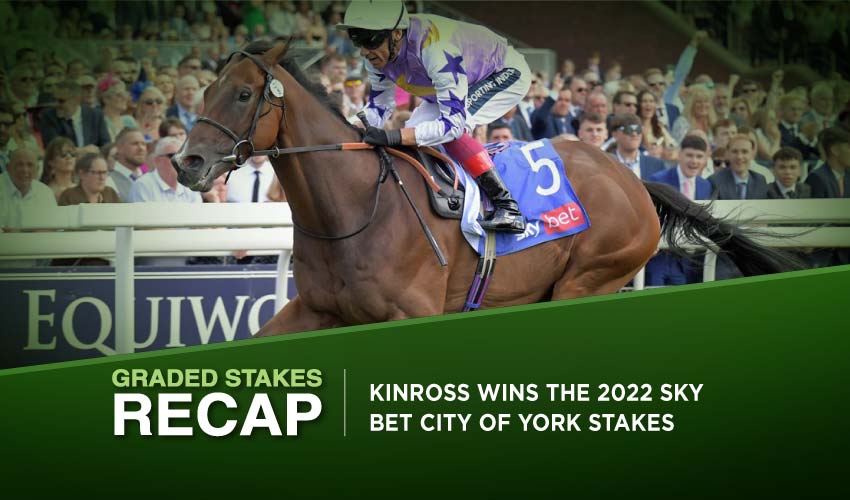 The final day of this year’s York Ebor Festival was headlined by the Sky Bet City of York Stakes. The only Group 2 race of the day. Here is what happened.

This was a fantastic race as three of the top four horses in the Lennox Stakes met again to see who would come out on top. The winner that day was Sandrine, and he started as one of the joint second favorites, with second place Kinross starting at the same price.

The fancied horse of the Lennox was Sacred and he was hoping to put a poor run behind him here. Many shrewd punters believed he could, as it was he who started the face as the favorite.

Raced over seven furlongs the race quickly established itself with Art Power and Pogo disputing the early lead. Both horses would hold the front two positions until the two-furlong pole.

Making his move from mid-division, Frankie Dettori on board Kinross found a seam up the rail and looked full of running.

Finding an effortless change of gear, Frankie swooped past Pogo and made his move toward the line.

His rivals Sacred and Sandrine tried to close the gap, but unlike in the Lennox, Frankie and Kinross had timed their move perfectly and wouldn’t be for catching.

Sandrine would have been disappointed not to have put any pressure on Kinross but still ran with credit to finish third.

For connections of Sacred, it’s a case of back to the drawing board following yet another poor run. Despite looking to make his move inside the final furlong, he had nothing left to give and could only finish in a disappointing sixth.