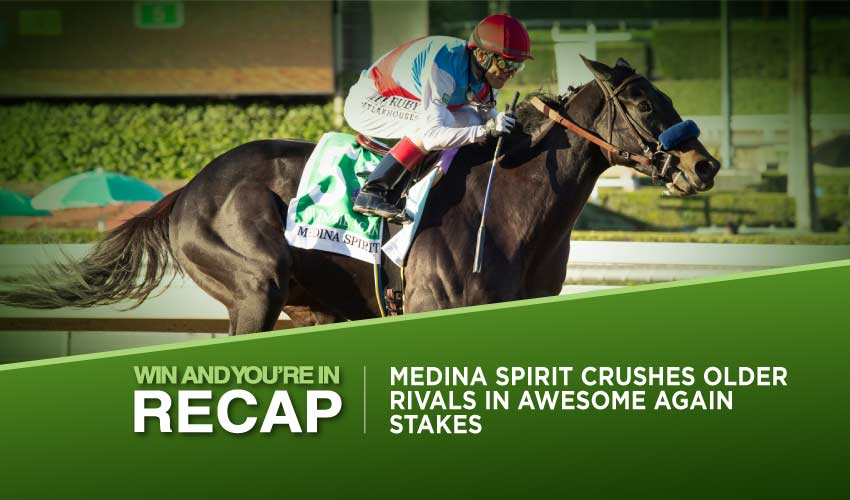 The card was pretty packed with some high-class action on Sunday as the meeting held five anticipated races, including Awesome Again Stakes. The G1 race ran on the dirt surface saw another victory of the KY winner Medina Spirit who should belong among the favourite for the upcoming Breeders’ Cup Classic. John Velazquez was the one who piloted the bay colt to the victory; however, Flavien Prat was the real star of the meeting. Not only he bagged three Grade races on the day, but he also managed to win the Santa Anita Sprint Championship aboard Dr. Schivel while having just one reign at his disposal. Therefore, also the rest of the Grade races definitely deserve the Review which we provide in this article.

The pinnacle of the whole card was open to three-year-old and older horses who clashed at the distance of a mile and a furlong, while the KY winner Medina Spirit (13-10) hit the track as the leading chance. The G1 event on the dirt surface was the third time the Bob Baffert bound colt showed up after his success at the Churchill Downs Racecourse. At first, he took gallant third in the Preakness, then he rested for a while before he easily bagged a Listed victory. This time, the three-year-old bay attempted to grab most of the purse of $300,000, while he managed to break away quickly as usual and romped to the first place right away. Showing the way under much experienced John Velazquez, KY winner Medina Spirit travelled smoothly throughout the race, and once the filed turned for home, the favourite just quickly scooted clear of his hard-trying rivals. In the end, KY winner Medina Spirit worked his advantage up to five lengths, crossing the line in 1:49.67. Thanks to his consistency, gutsy attitude, and apparent class, the three-year-old cemented his position as one of the favourites for the Breeders’ Cup Classic alongside his peers Hot Rod Charlie and Essential Quality whose older stable-mate Knicks Go still looks the leading chance here.

As Medina Spirit struck gold in a gate-to-wire style, none of the other contestants was nearly as eye-catching as the winner, even though Tripoli (14-8) made a decisive move in the second turn. However, the burst of energy came at the moment Tripoli was running wide, so as soon as his progress didn’t continue as expected in the final stretch, the four-year-old colt ran out of steam. The winner of this year’s G1 Pacific Classic Stakes just didn’t fare this time, concluding his disappointing performance in fourth place.

Galloping on the fourth place at the fence, Stilleto Boy (55:1) arrived at the final stretch behind KY winner Medina Spirit and being strongly encouraged by Kent Desormeaux; he finally drew away from other contestants. He finished as the best of the rest in second, while late-running Express Train (67-10) took third from the outside. Tizamagician (26-5), the co-leader for some time, faltered in the end to fifth place as another respected participant, Idol (9-1), was never a factor.

The turf surface of this $200,000 race welcomed a quintet of participants who met at the distance of one mile. At the beginning of the G2 event, four contestants showed great speed and hit the front together, but soon enough, the second chance Smooth Like Strait (19-10) took command, while eager Hit The Road (51-10) was brought back to gallop next to favourite Mo Forza (3-5). The five-year-old horse trained by Peter Miller has been a multiple Grade winner striving to bag his sixth G2 victory, which also would be the fourth in a row. Settled at the rear of the small field, Mo Forza seemed unfazed by the battle at the front, relaxed, and moved forward only in the second turn.

Smooth Like Strait was challenged by Red Storm Risen (25-1) for some time; however, he returned to the first place when it mattered and seemed a likely winner as Mo Forza still had a lot to do in the final stretch. But once the bay son of Uncle Mo properly rallied for the finish, nothing and nobody could stop him as Hit The Road was even pushing him forward from the outside. Adding another prestigious victory to his impressive record, Mo Forza passed the winning post in 1:32.45 a ½ of a length in front of Smooth Like Strait. The latter then managed to hold off second place ahead of Hit The Road, while Red Storm Risen tired himself out quickly by pressing the pace and finished fourth. Fifth Order and Law (25-1) never played a significant role here.

As it was said, Mo Forza scored the fourth victory in a row by Sunday’s success. Still, there’s another interesting fact about that: all those victories he achieved in only two events – he won both Del Mar Mile Handicap/Stakes both in 2020 and 2021, while he’s also a G1 winner since 2019. He scored the Hollywood Derby back then, and he’ll probably try to bag another one G1 success at the Breeders’ Cup meeting. He might take on classy European milers such as Poetic Flare, Palace Pier, Baaeed, or last year’s winner of the Breeders’ Cup Mile, Order of Australia.

Also, the $200,000 race over a mile and a quarter saw a triumph of a favourite; United (7-5) left everybody in suspense till the very end, though. In the G2 company of three-year-old and older horses, the Richard Mandella bound gelding hit the turf surface among 11 rivals and settled in the midfield, but on the outside, so that he won’t get stuck in the pack. While United was another promising ride for Flavien Prat, Ricardo Gonzales sent Acclimate (39-5) for the first place after the first turn, upon which the bay proved he was a bit underestimated for the race. The seven-year-old hasn’t scored at the G2 level for two years but showed great enthusiasm for the John Henry Turf Stakes when leading the pack for the sheer majority of the race. Also, when Acclimate reached the final turn, he still was at the front and trying to hold off his rivals in the stretch, the Philip D’Amato charge was all heart, yet it didn’t ensure his victory in the end.

United remained hidden in the second half of the field until the final stretch where Flavien Prat asked him some question, and even though it was a long way from eighth place to the top, United surpassed it just in time. Sentencing Acclimate to the second place, United won by a nose in 1:58.41, while third Friar’s Road (4-1) was also just a nose away from the second place. Friar’s Road spent the race as the last of all, but he angled the last turn brilliantly and navigated successfully through the field of tired rivals to snatch the close third.

Award Winner (17-1) was constantly in touch with the front but never looked to challenge the first three and finished in fourth, while Master Pierce (37-5) had an unfortunate run with lacking space in the crucial phase. He crossed the line in fifth. But it was United who was the only star of the race, given the six-year-old has been a fantastic servant to the connections since 2018. Moreover, he scored twice in the G2 Eddie Read Stakes, and thanks to his Sunday’s success, he is also the dual winner of the John Henry Turf Stakes. United ran twice in the Breeders’ Cup Turf, too, but after his second place behind Bricks And Mortar in 2019, he couldn’t get past eighth place in last year’s edition, posing no threat for Tarnawa. Still, the duo might clash in the race also in 2021, and we might actually witness their rematch.

The G1 turf race with the purse of $300,000 attracted the field of 9 three-year-old and older fillies and mares. Favourite Going To Vegas (11-10) displayed great early speed and went to the first place right away, where she spent the whole distance of a mile and a quarter. Umberto Rispoli let her gallop with a slight advantage over Neige Blanche (49-2) and Dogtag (27-5), but when he asked the four-year-old bay to quicken up, Going To Vegas easily drew clear of the mentioned contestants. The daughter of Goldencents rallied for the win, but her success wasn’t as easy as it looked to be because Luck (12-5) showed a fine turn of foot, leaving the midfield behind and closing on the favourite with each stride. The finish line came in time for Going To Vegas, though, so she managed to hold her rival off by a head in 1:58.84.

It was the first G1 victory for the winner as she seized second place three times in a row during last season, including the G1 American Oaks; however, the first success came in 2021. At first, she scored at the G3 level and failed to deliver among the elite, but once she gained some confidence in the Allowance race and progressed enough to win a G2 John C. Mabee Stakes, the Richard Baltas charge crowned her career with a G1 triumph in the Rodeo Drive Stakes. Besides ex-French four-year-old filly Luck, nobody really threatened the favourite as Dogtag secured third place without a chance of better placement, while Neige Blanche went flat in the final stretch and finished fourth. Respected Magic Attitude (31-5) was never a factor and couldn’t get past sixth place behind fifth Rideforthecause (44-1).

For the second time, this $200,000 race was held as a G2 event, even though it attracted some well-known three-year-old and older horses who clashed at the distance of 6 furlongs. Despite the fact Vertical Threat (49-10) had the best start and charged for the lead, favourite Dr. Schivel (9-5) stayed at his heels only for a short period of the race, upon which Flavien Prat pushed him to the front. The jockey basically decided the race at this point, and nobody managed to unfold such a finish it would threaten the three-year-old bay at least a tiny bit, so the only thing that could hinder Dr Schivel’s impressive performance lay elsewhere – in a broken reign.

Flavien Prat navigated his mount throughout the race only with his left reign, still, the preferred colt trained by Mark Gratt won in an impressive style and earned a spot in the Breeders’ Cup Sprint. He will have a great chance to win that, too, given he’s a progressive specimen who left out most of the season 2021, which renders him quite unexposed in the potential clash with Jackie’s Warrior and another warrior not by name but by nature, Firenze Fire.

Last year, the son of Violence quickly scored the G1 Del Mar Futurity; however, he added another victory when returning to the track in June on an Allowance race. In August, he displayed his battling qualities when winning over Eight Rings in the G1 Bing Crosby Stakes, and on Sunday, he won his third G1 by three a ¼ of a length, crossing the line in 1:09.44.

The talented sprinter bumped into rivals who couldn’t hold a candle to him this time as Vertical Threat faltered shortly after he lost the prominent position and finished the last. At the same time, respectable participants Flagstaff (19-5) and C Z Rocket (12-5) couldn’t come up with such a finish to get even closer to the winner. Still, the efforts of the duo of seven-year-old horses were honourable, for Flagstaff turn for home at the barrier after spending the race in fifth and then fought hard for second place with C Z Rocket. The latter ran at the rear of the field and considerably reduced the gap in turn; however, he rallied forward too late to catch Dr. Schivel; moreover, he clashed with tough Flagstaff, who just denied C Z Rocket second place. Colt Fiction (79-5) was fourth, Collision Illusion (31-5) finished fifth.