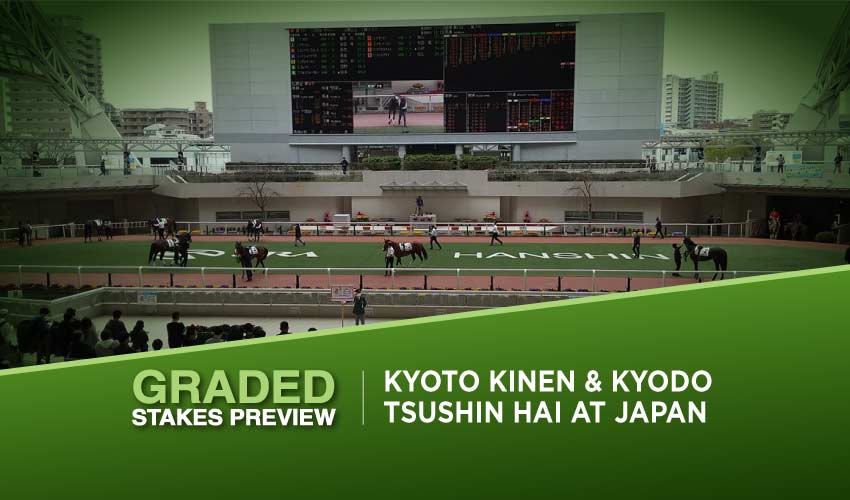 Sunday offers two Graded races in Japan, while The Kyoto Kinen could be a special one, suggesting who could be a significant player in the G1 Tenno Sho spring. While this G2 turf race is held in Hanshin, the card at Tokyo features the G3 Kyodo News Hai, also known as the Tokinominoru Kinen, won in the past by Suave Richard, Gold Ship, or brilliant Efforia.

The turf G2 event has been a popular preparation race for the G1 Tenno Sho (spring) while being used and won by star mares Loves Only You and Chrono Genesis in recent editions. At the distance of a mile and three furlongs, four-year-old and older horses will clash for the purse of 119,800,000 Yen.

The Kyoto Kinen welcomes a field of 13 participants with no clear favourite as Uberleben (5-2) would’ve been the leading chance in May but not anymore. The back then three-year-old filly trained by Takahisa Tezuka collected some good places at the Graded scene, concluding the successful campaign with a victory in the G1 Yushun Himba (Japanese Oaks).

She bettered Akaitoro Musume, who went on to score the G1 Shuha Sho where Uberleben managed only fifth, upon which she performed alright in the G1 Japan Cup. Uberleben finished sixth, and even though she didn’t meet the most quality field the Japan Cup has seen, if she remembers her old form and shows at least something similar, she should place here. Whether she’s capable of winning the G2 Kyoto Kinen, we doubt that as in the Yushun Kimba, she delivered her very best performance, and it’s possible she won’t ever get close to that, being a one-hit-wonder.

Let’s stay with the four-year-old participants as some haven’t scored at the highest stage, but Red Genesis struck gold in the G2 competition in May. The Yasuo Tomomichi failed to shine in the Japanese Derby or St Leger; however, he finished second in the G2 Kobe Shimun Hai behind talented Stella Veloce, suggesting that exactly the G2 competition should go well into his stride.

He likes the distance, doesn’t mind the Hashin Racecourse, so nothing is stopping him from recording his second Graded victory. Geraldina is another four-year-old in the field. Although she finished only fourth in her premiere outing in the Graded company, she’s got three Stakes victories under her belt, and there could be something more in her that we’re yet to see. Maria Elena then took second in the G3 after performing consistently well at the Stakes scene.

At the completely opposite side of the spectrum is nine-year-old Makahiki, who doesn’t belong among the victory candidates here; however, he’s always a bit respected because he’s still capable of big runs, which he confirmed in the last year’s G2 Kyoto Daishoten. Back then, he caught off guard every single of his rivals.

In the competitive field, we need to mention also Sanrei Pocket, the seven-year-old horse who was fourth in the G1 Japan Cup last time out after taking the same place in the G1 Tenno Sho. It’s not probable he’s about to improve in his age, but he should grab another place here, which applies to Red Gallant as well. He bagged a G3 win in January, and therefore, he should be quite fresh.

Our betting pick for the Kyoto Kinen is Red Genesis, whose ability should be enough to strike this. We still like Uberleben, yet she needs to prove she can at least get close to the form she performed in the Japanese Oaks.

The G3 race is held on the turf surface at a mile and a furlong distance. It’s open to the three-year-old colts who are about to compete for the purse of 76,590,000 Yen, while the first name to catch out attention is Geoglyph, trained by Tetsuya Kimura.

We loved the son of Drefong, especially for the G1 Asahi Hai Futurity Stakes in December, where he managed only fifth place, but as he’s a highly talented chestnut, he should play a major role in Sunday’s race. He looked quite promising after bagging his debut as a two-year-old, upon which he scored the G3 Sapporo Nisai Stakes.

Thanks to his powerful turn-of-foot, Geoglyph is expected to strike gold here under Christophe Lemaire; however, his rivals are also very exciting. We’re talking about Danon Scorpion in particular, who even bettered Geoglyph in the Asahi Hai Futurity Stakes when running in third; moreover, he won the Listed Hagi Stakes prior that where he left Killer Ability behind, the subsequent victor of the G1 Hopeful Stakes.

So far, Danon Scorpion has been showing to be a promising junior, so succeeding in this G3 event won’t come as a surprise from him. Asahi is yet to record a big victory, but the Takashi Kanari trained colt came in second behind Geoglyph in his debut and then bumped into interesting Ask Wild More next time. Once he finally achieved his premiere win, he was pointed towards the G2 Tokyo Sports Hai Nisai Stakes to grab second place again; however, it was behind great Equinox.

The race should be decided among the mentioned trio as all of them displayed enough class to shine even at the G1 stage, not just in the G3 events. Both Geoglyph and Danon Scorpion possess a powerful speed in the final stretch, so a mouth-watering clash in the closing stages could be happen.

Still, we should also mention Danon Beluga, who morphed his November debut into an easy victory and given he’s out of the G1 runner-up Coasted; there are some expectations surrounding him. The last to mention is Achernar Star, finishing seventh in the Hopeful Stakes. He might snatch up a fine place here.

Our top pick for the Kyodo News Hai is Geoglyph, who should relish the distance, and even though he faces some formidable rivals here, he could come out on top thanks to his fighting abilities.

Follow us on Social Media for Kyoto Kinen updates!