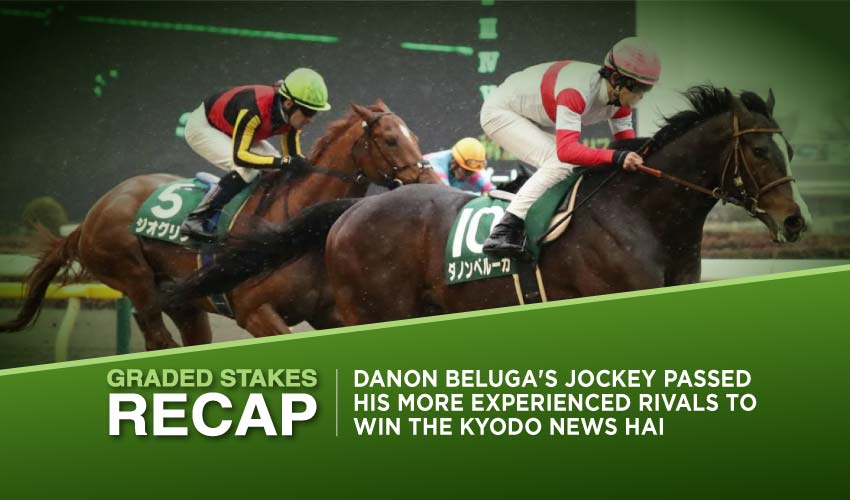 Japan saw a couple of Graded races on the previous weekend. The result of the Kyoto Kinen was literally shocking as the 51-1 chance, African Gold, scored the race after making it all. While this G2 race was held in Chukyo, the Kyodo News Hai was run at the Tokyo Racecourse where promising Danon Beluga denied favourite Geoglyph.

African Gold (51-1) brought about a massive upset among four-year-old and older horses. The seven-year-old outsider wasn’t considered a victory candidate for this G2 turf race at all; however, it was him who seized most of the purse of 119,800,000 Yen.

At the distance of a mile and three furlongs, African Gold used his early speed to overcome the wide draw and he settled at the front, where the gelding remained until the very end. Of course, some of his rivals came up with powerful turn-of-feet but the outsider, given a lovely ride by Kyosuke Kokubun, was just uncatchable on Saturday, crossing the wire in 2m 11.90s.

Throughout the final stretch, the Masato Nishizono bound gelding kept finding more to stay first, and he fought diligently to maintain the advantage of one and ¼ of a length to second Tagano Diamante (217-10). The six-year-old horse also didn’t belong among favourites, but together with Sanrei Pocket (73-10), they were the only contestants rapidly closing on the front, yet they had to settle for taking second and third place, respectively.

A couple of four-year-old fillies, expected to play a major role here, couldn’t close much on the leader, and therefore, Geraldina (13-2) was fourth and Uberleben (21-10) fifth, while another considered participant, Red Genesis (51-10), had a terrible run a finished last of all.

The 76,590,000 Yen race was open to a three-year-old colt who covered the distance of a mile and a furlong. On the turf surface, Danon Beluga (29-10) confirmed to be a hugely talented specimen as after bagging his debut; he was pointed among more experienced rivals; still, he prevailed under Kohei Matsuyama.

The son of Heart’s Cry spent the race in the midfield and galloping on the outside; his jockey then didn’t have to think twice of the space as Danon Beluga had plenty of it in front of him in the final stretch. The obviously green but enthusiastic dark bay rallied forward, passing by each of his rivals, including front-running Be Astonished (29-1), upon which he cruised to the final line in 1m 47.90s.

The preferred chestnut, Geoglyph (12-5), ran in the pack and had a good position in the final stretch; however, he was quite reluctant to throng between horses, and he did so only when strongly urged by Christophe Lemaire aboard. Still, even when Geoglyph charged forward, his turn-of-foot wasn’t as explosive as he would’ve needed to win, so he settled for second, one and ½ of a length behind Danon Beluga.

The favourite indeed carried more weight than his rival, but the victor looked so good on Saturday that he would’ve bettered Geoglyph even without the advantage. Be Astonished was third.

Follow us on Social Media for Kyodo News Hai updates!