Kyprios holds off Stradivarius in the 2022 Goodwood Cup 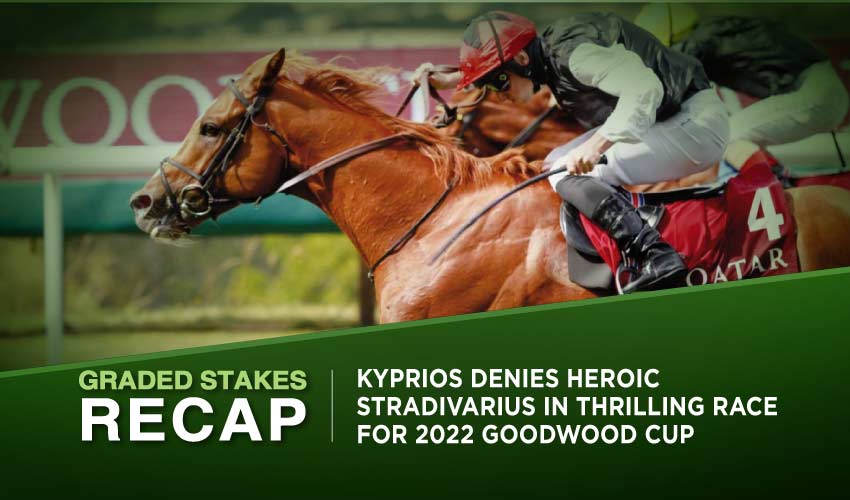 This year’s Glorious Goodwood festival got off to bang with three top-quality races – The 2022 Goodwood Cup, Vintage Stakes, and Lennox Stakes. Here we recap some of the best of the action.

The headline race of the day was the Goodwood Cup.  All eyes were drawn to Stradivarius and whether he could sign off a spectacular racing career with a 19th Grade One success.

Fittingly it would be the first time we would see Stradivarius take on his two younger rivals Kyprios and Trueshan. The trio were expected to be a cut above the rest, and so this proved.

In what was a briskly run affair, the horses reached the two-furlong pole with Kyprios looking to fend off his rivals with a burst from the front.

Unable to burst clear, all three were still in with a great chance of winning as they hit the final furlong.

First to feel the heat was Trueshan who couldn’t quite match the speed of his two rivals. With just 200 yards to race, it looked like Stradivarius would sign off in style and appeared to be getting on top, but Kyprios found a late burst to just deny the champion his fairytale ending winning by half a length.

The Graded action kicked off with this year’s renewal of the Vintage stakes and all eyes were on Chesham Stakes winner Holloway Boy.

In just his second start and first in graded company, Holloway Boy raced keenly throughout. Danny Tudhope did a masterful job in easing Holloway Boy into contention and with a half furlong to go, it looked like he would last home.

However, the eye was drawn to the yellow silks on the outside as Jamie Spencer pulled off a peach of a ride coming from last to first in the blink of an eye to guiding outsider Marbaan home.

In the end, the winning margin was just over a length but the manner of victory was clear.

Holloway Boy despite the defeat still leaves the race on a positive note. Mysterious Night didn’t have the turn of foot to go with the first two but did run a nice race to claim third.

In what was one of the races of the day, Sandrine ensured a great day for the bookies as he pulled off the shock at a big price to land this year’s Lennox Stakes.

The Favorite for the race was Sacred, but something was clearly amiss as he rarely featured.

Instead, the tempo was dictated by Pogo who tried to win off the front, but with just a couple of furlongs to race didn’t have the speed or stamina to last home. Instead, it was Sandrine who traveled much the best.

Kicking a long way from home, jockey David Probert tried to seize the initiative and his decisive actions caught the others napping as he got the jump on the entire field.

Last year’s winner Kinross had to weave his way through the pack and almost pegged the winner back, but it was too little too late as Sandrine gamely hung on to give trainer Andrew Balding his first ever win in the race.

Follow us on Social Media for more 2022 Goodwood Cup updates!