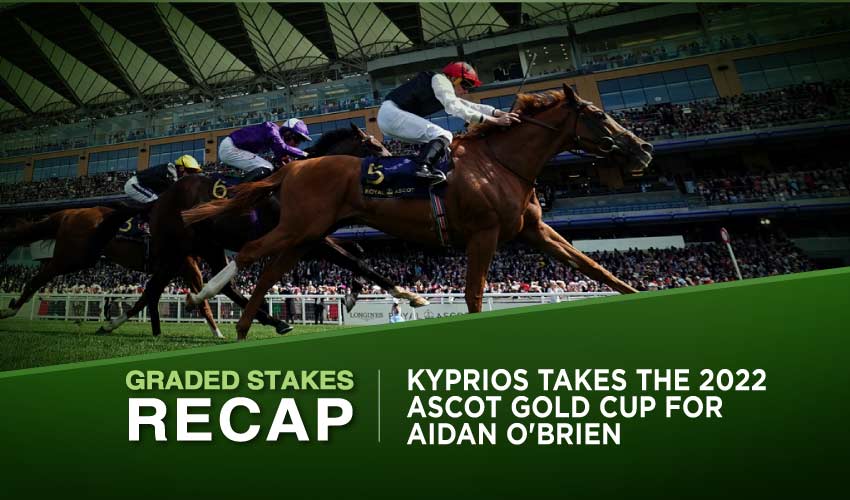 The undoubted highlight on day 3 of the Royal Ascot was the 2022 Ascot Gold Cup. A race held over a distance of two miles and four furlongs, it’s a race for staying specialists with some horses in the field having competed on both the flat and over jumps.

Nine horses headed to post in the hope of adding their names to the famous lists of past winners. The field was headlined by Stradivarius. Now eight, this was Stradivarius’s last appearance at the Royal meeting having won the Gold Cup in 2018, 2019 and 2020. Stradivarius was hoping to join the legendary Yeates in having won the race four times.

Despite all of the attention being on Stradivarius and his bid to make history it was in fact the Aidan O’Brien trained Kyprios who went off as favorite. A four year old, Kyprios had never raced over the Gold Cup distance which left him with a few questions to answer. Stradivarius found himself as the clear second favorite, with last year’s runner up Princess Zoe and Tashkhan finding themselves rounding off the top four in the betting.

With the capacity crowd hoping they would be on the verge of witnessing history the excitement in the air was palpable as the horses left the gate. With all nine horses breaking evenly  it was Earl of the Cotswolds who took up the early running.

The order mostly remained unchanged as the horses got to the halfway stage before the action dramatically sparked into life in the final three furlongs.

Tackled on either side, long time leader Earl of the Cotswolds quickly retreated leaving Tashkhan, Mojo Star, Burning Victory and Kyprios battling if out for supremacy.

Stradivarius who was caught up in a wall of traffic had to switch and edge out and it wasn’t until the final furlong and a half that jockey Frankie Detorri was able to get him finally motoring.

As the horses entered the final furlong it was Kyprios and Mojo Star who looked like they would do battle up until the line. With neither horse giving an inch, it was Kyprios who just found a little extra, winning by half a length as they crossed the line.

Despite putting in a finishing flourish, Stradivarius could only finish 3rd. With plenty of running left in his legs, there were plenty of pundits who believed with a clearer passage Stradivarius would have won the race.

This year’s win was Aidan O’Brien’s eighth Gold Cup victory – a feat that now leaves him clear at the top of the training charts for the race.

With even more big races to come, it could turn out to be a special few days for the master trainer.

Follow us on Social Media for 2022 Ascot Gold Cup updates!