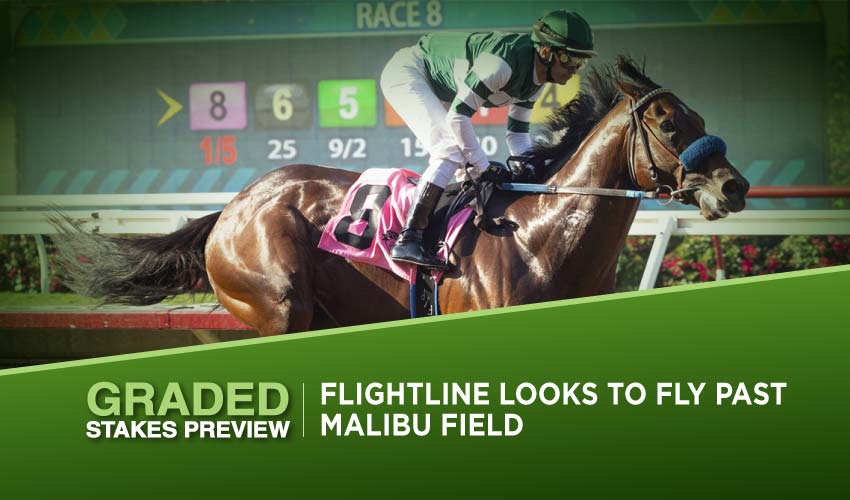 The main-track action at Santa Anita on Boxing Day is of an even higher quality than the turf schedule, with big names everywhere you look in three Graded stakes and at Malibu Stakes.

The centerpiece is the Grade 1 Malibu Stakes, which features the much-awaited return to action of the unbeaten Flightline, while the consistently high-class Hot Rod Charlie bids to bounce back to winning form in the Grade 2 San Antonio.

The fillies get their chance in the Grade 1 La Brea, led by the explosive Private Mission, out to make amends for her Breeders’ Cup Distaff blowout.

The old conflict between proof and potential is at the heart of the Malibu Stakes, the main-track highlight of Sunday’s sparkling card on opening day at Santa Anita and the most eagerly anticipated race of the Christmas period.

On one hand there is the solid, super-professional speedball Dr Schivel, whose prowess is there for all to see in the formbook. On the other hand there is the contender who might be the next big thing, the undefeated, untested, unearthly Flightline, about whom there is a bigger buzz than any other horse on the grounds. We have been waiting for him like children wait for Santa Claus – but will he be real, or just a fairy-story?

Two runs, two wins, with a combined winning distance of 26 lengths, is what Flightline brings to the table, in a maiden over six furlongs at this track in April and an allowance optional claimer at Del Mar, again at six furlongs, in September. He’s beaten nothing, but the way he has done it, two exhibition races resonating with awesome power, has got everyone talking.

To pick at his past performances is pointless. There’s no clue there; on form, he can’t win. On potential, on reputation, he could blow these Grade 1 rivals away without turning a hair. The big issue for bettors is that his reputation and potential have left him at very short odds against very good horses, and the risk/reward ratio is tilted sharply to the former.

His main rival is Dr Schivel, who has the money in the bank courtesy of two Grade 1 wins, a Grade 2 win in the Sprint Championship here over six furlongs, and runner-up spot in the Breeders’ Cup Sprint, beaten officially a nose but more like a quarter of an inch after being clear inside the last sixteenth. We know he’s very good, we know he’s very fast, we know he stays this distance as he won the Grade 1 Del Mar Futurity over seven last year.

Dr Schivel, from what we know, is tactically more versatile than Flightline, which is to his advantage, as is his greater experience. As a seasoned Grade 1 runner, he is certainly the percentage call, and he has a two-for-three record here (third on debut).

Often, when a race is perceived to be all about two horses, a third horse gatecrashes the party, and if that happens here then Triple Tap is the likely spoiler. He’s unbeaten in two, a maiden here in March and an allowance optional claimer at Del Mar last month, exactly the same as Flightline only not quite so dramatic. However, the tractor beam falls on his pedigree, as he’s a Tapit half-brother to the great American Pharoah.

Pedigrees don’t win races, but Triple Tap evidently has a measure of his illustrious relative’s ability, and trainer Bob Baffert isn’t the sort to waste a Grade 1 entry on a horse who isn’t up to the job.

It would be a big surprise if the winner didn’t come from those three. Breeders’ Cup Classic fifth Stilleto Boy had earlier been a longshot runner-up in the Grade 1 Awesome Again here over a mile-eighth and will surely find this too much of a speed test, while Team Merchants won a stakes over a mile at Del Mar but that was on turf.

Timeless Bounty has done all his racing at second-tier tracks, making his stakes breakthrough last time out at Mahoning Valley in Ohio at boxcar odds, and he could be outclassed. Back in sixth in that stakes was the increasingly disappointing Baby Yoda, whose Saratoga allowance romp was probably a flash in the pan. He’s certainly better than he showed at Mahoning Valley but this looks much too tough a spot.

Betting Prediction the Malibu could showcase a potential superstar in Flightline, but at the morning-line odds the percentage call has to be Grade 1-winning sprinter DR SCHIVEL.

A sharp drop in distance is not usually an encouraging signifier, but Private Mission should have no trouble coming back after tearing through the Breeders’ Cup Distaff at a sprinter’s pace, a totally wasted effort and one that ruined the Distaff as a logical contest.

She dropped away to finish last at Del Mar, but that is no reflection of her ability. Before that ridiculous blowout Private Mission was three-for-three in 2021, easily winning the Grade 3 Torrey Pines at Del Mar over a mile before landing the Grade 2 Zenyatta at this venue over a mile-sixteenth, racing just behind the pace early before kicking on at halfway to maintain her unbeaten record (three-for-three) at Santa Anita.

This officially represents a step up in class from the Zenyatta, but this is not the hottest Grade 1 ever carded and Private Mission has plenty of early speed to put her in command, as we saw so memorably in the Distaff.

Her Bob Baffert-trained barnmate Kalypso is the only other Graded-stakes winner in the field, having taken down the Grade 2 Santa Ynez over course and distance back in January. However, she hasn’t been seen since walking off the track at Churchill Downs after the Grade 2 Eight Belles in April; she was thought to have bled, but that wasn’t the case.

That lengthy layoff may result in a little rustiness, which also goes for Missy P , who has been away since June, when she finished fifth in a turf stakes here over six furlongs. She was earlier stakes-placed over course and distance on the main track and, with only three runs to her name, is entitled to make improvement.

John Sadler, trainer of Flightline, is represented by Livingmybestlife, who took her record to four-for-seven when winning a stakes at Del Mar over a mile last time out, and who has a similar profile to Canoodling, whose stakes wins have come at little Albuquerque and Zia Park, where she won easily over six furlongs last time out.

Both have potential for exotics players, probably more so than Brilliant Cut , third behind Kalypso in the Santa Ynez but with only a claimer win since then, and Eddie’s New Dream, whose recent wins in allowance optional claimers have come at longer distances on turf.

Betting Prediction there is not much strength in depth to the La Brea, so it’s a good opportunity for PRIVATE MISSION to put the Distaff behind her and make a breakthrough at Grade 1 level.

More stardust, were it required on such a stellar afternoon’s racing, is provided in the shape of high-class three-year-old Hot Rod Charlie, who bids to close out a successful campaign down in class in the San Antonio.

‘Chuck’ has danced pretty nearly every dance in 2021, Grade 1s all the way since his third place in the Kentucky Derby. He was runner-up in the Belmont Stakes, hit the wire first in the Grade 1 Haskell at Monmouth Park before having his number taken down, and then nailed his first top-level score for keeps when going gate-to-wire in the Pennsylvania Derby at Parx Racing. Last time out he ran with great credit in the Breeders’ Cup Classic to be fourth behind Knicks Go, only dropping two places in the last few jumps.

A habitual front-runner, Hot Rod Charlie won’t face much competition for the lead – the blinkers he wore at Del Mar aren’t present today – and his class advantage gives him outstanding credentials here. Barnmate Go On is a maiden winner making his stakes debut.

This time last year Express Train finished second in the Malibu Stakes, and has only missed the board once in Graded company during 2021, winning two Grade 2s and running third in the Grade 1 Awesome Again over a mile-eighth here on his most recent start. He is only one-for-eight at Santa Anita, although his consistency and class will stand him in good stead among this company.

Bob Baffert’s closely-matched pair Azul Coast and Eight Rings finished first and third, separated by a length and three-quarters, in the Grade 3 Native Diver over a mile-eighth at Del Mar last month, with Kiss Today Goodbye in between in the runner-up spot. That was Azul Coast’s first win in Graded company and he is zero-for-four here, while Eight Rings – fourth in the Breeders’ Cup Dirt Mile – has only won once since his two-year-old days, and that in an allowance optional claimer.

Betting Prediction  HOT ROD CHARLIE is the class act in the San Antonio and, if he brings his A-game after a hard race at the Breeders’ Cup, is the clear choice to end the year with a win.

Make sure to stay tuned for the latest racing odds, racing entries and Race Results. Sign up and get a 10% rebate.