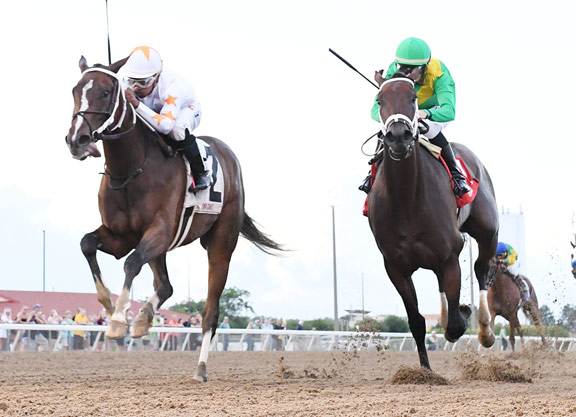 Following her third-place effort in the Houston Ladies Classic Stakes (G3) on Jan. 31 at Sam Houston Race Park, Phoenix Thoroughbred III’s multiple graded stakes winner Lady Apple retired. It was announced on Feb. 1 that the 5-year-old daughter of Curlin was retired to her owner’s broodmare band.

Lady Apple brought in $1.2 million at The November Sale, Fasig Tipton’s premier breeding stock sale last fall at Keeneland. She was part of the Taylor Made Sales Agency consignment.

“She has been a fantastic race mare for us, and she’ll be an excellent addition to our breeding operation;” said Abdulaziz. “She has a top-class pedigree with a race record to match, while the cross with Quality Road looks very exciting. We are seeing some excellent results from our breeding operation around the globe; and adding horses such as Lady Apple can only add to that.”

Lady Apple has won six of her 19 total career starts, and she has over $1 million in purse earnings. Her most impressive runs have come at the grade 3 level; and she was trained by Hall of Fame trainer Steve Asmussen.

When she first started racing, Lady Apple raced in partnership with KatieRich Farms, which is her breeder. Her first career performance was a fifth-place run in a maiden special weight race at Oaklawn Park. Following that maiden special weight performance; she went on to win her next two starts; with the most prominent of those races being the Fantasy Stakes (G3) at Oaklawn.

With that impressive victory, she qualified for the Longines Kentucky Oaks (G1). She finished out that big event by finishing third.

While Lady Apple exited the race with a third-place finish; it did not take her long to begin winning once again. Next time out, she scored the Iowa Oaks (G3) at Prairie Downs. She then went on to suffer a loss once more before winning the Remington Park Oaks (G3) at Remington Park.

Lady Apple’s most prominent career victory was the 2020 edition of the Houston Ladies Classic Stakes; which was her last win before retiring. In that outing, she overcame Serengeti Empress and Street Band, both grade 1 victors.

Following that victory, Lady Apple ran in two more races last year, both of which resulted in runner-up finishes.

Lady Apple was bred in Kentucky, and she is the top runner produced by Clever Trick mare Mary Apples; who is a grade-2 placed runner. The mare has produced a total of 11 winners, and she is the dam of Miss Red Delicious and Dr. Diamond Prize, both black-type winners.