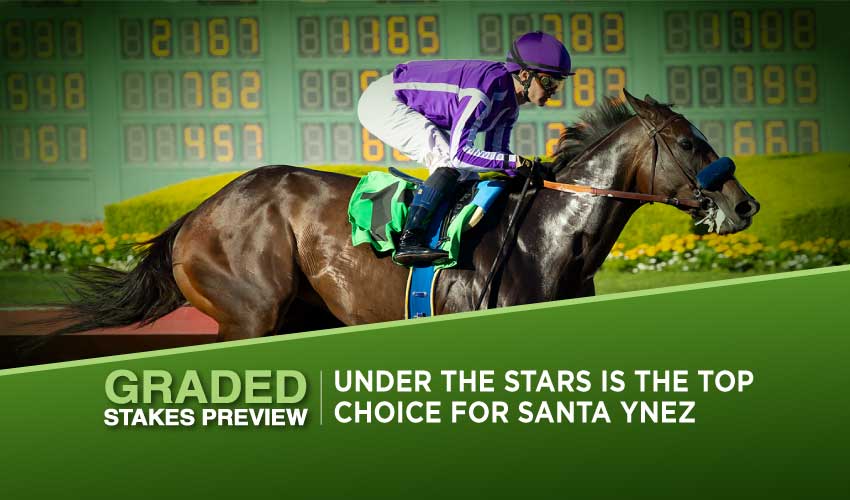 It’s fillies to the fore at Santa Anita this weekend with a tight contest for the Grade 2 Santa Ynez on Saturday the highlight of the schedule, featuring a clash between promising types Under The Stars and Big Switch. The trainers responsible for those two, Bob Baffert and John Sadler, also have half the field between them in the Grade 3 Las Cienegas, the pick of Sunday’s action at the LA track.

Bob Baffert has won the Santa Ynez a record six times including the last two runnings, so it’s no surprise that his representative in Saturday’s feature at Santa Anita is morning-line favourite, although her chance is not as clear-cut as that might suggest.

It took Under The Stars (8-5) three runs to lose her maiden tag, the half-sister to Kentucky Derby runner-up Bodemeister getting the job done at little Los Alamitos over six furlongs last time out, running out an easy three-length winner. She was long odds-on that day and could do no more than win, serving notice that she was ready to move back up in grade.

On her previous start she ran third in a stakes at Del Mar, firmly put in her place by barnmate Eda, who made the form look pretty good when winning the Grade 1 Starlet on her next start. Under The Stars has those stakes-race credits and the right trainer and owner, but her main rival has strong credentials of her own.

The unbeaten Big Switch (9-5) leaves Del Mar for the first time after two runs, two wins, a maiden on debut and then a state-bred stakes over seven furlongs in November. On that occasion she took control early in the stretch and extended her advantage all the way to the line, finishing two and three-quarter lengths ahead of the runner-up and more than nine lengths clear of the third horse.

It was an impressive display, and although today’s race is another step up again, it isn’t the most fiercely contested Grade 2 on the books and her stamina is assured.

The only filly in the field with Graded-stakes experience is Awake At Midnyte (3-1), although it brings a question mark. Last time out she missed by only a nose in the Grade 3 Jimmy Durante at Del Mar, a strong effort, but that was over a mile on turf – and in a slow time – and now she cuts back in distance and switches surface.

The former is not really the issue – she had enough speed to make a winning debut over six furlongs here in October, and had fellow debutante Under The Stars three-quarters of a length back in third, although collateral debut form is not to be relied on – but there has to be a doubt over whether that Jimmy Durante effort was because of turf or because she’s simply a very talented filly. Perhaps it’s a little of both.

The pace in the race is likely to come from Mimajoon (10-1), who is two-for-three with both wins coming at Golden Gate, one on turf and the other on the all-weather, on which surface she went gate-to-wire in a short-field stakes over six furlongs last time out. This is another short field, but the extra class won’t make it so easy for her to dominate in the second half of the race.

Another with surface concerns is Miss Mattie B (5-1), whose last two starts were on the weeds, the most recent when breaking her maiden at the fourth attempt at Del Mar over a mile. Today’s test may mean things happening a little too quickly for her, while longshot Big Shamrock (20-1) won a sprint maiden at Los Alamitos last time out and could be out of her depth here.

Betting Prediction for the Santa Ynez :

May be as tight a race as the morning-line suggests, but UNDER THE STARS looks ready to step back up to stakes level after an impressive maiden score.

The atypical demands of the downhill turf course at Santa Anita give Sunday’s feature Las Cienegas an extra layer of uncertainty, so winning form over course and distance earns a bigger tick than might otherwise be the case.

That applies to Zero Tolerance, who won a stakes in a fast time over course and distance three starts ago, following that up when running out of gas and fading into fourth place over a mile on turf here in the Grade 3 Autumn Miss. She bounced back to winning form in an allowance optional claimer over the flying five at Del Mar last time out and should be suited by conditions.

Trainer John Sadler puts two in the gate, with Constantia having recorded all her four victories at the Los Angeles circuit, the most recent coming in stakes company over six furlongs last April. She hasn’t hit those heights in four starts since, though, while barnmate Gold For Kitten may have had her limitations exposed after two defeats at stakes level on the heels of four straight victories in minor company.

Another trainer doubly represented is Bob Baffert, whose Ginja brings a less than impressive one-for-nine record to the table, with five runner-up finishes indicating either a lack of kick or a lack of determination. Perhaps this switch to turf may make a difference. Her stablemate Beautiful Gift is two-for-three at Santa Anita, including the Grade 3 Santa Ysabel over a mile-sixteenth, but comes along today off almost an eight-month layoff since finishing down the field in the Grade 2 Black-Eyed Susan at Pimlico, and this speed test on unfamiliar turf will expose any rustiness.

In three starts at stakes level Quiet Secretary has never finished higher than sixth, and although she has a chance of bettering that record it’s tough to see her figuring at the sharp end. Tapwater has also struck out on all six stakes starts and hasn’t run at a distance this short since her debut; conversely, Hear My Prayer has plenty of speed and her third-place in a stakes at Del Mar over five furlongs last time out means she shouldn’t be ignored.

Already a winner over course and distance, ZERO TOLERANCE should be forgiven defeat at a mile two starts ago and her natural speed makes her the choice here.

Follow us on Social Media for Santa Ynez Stakes updates!