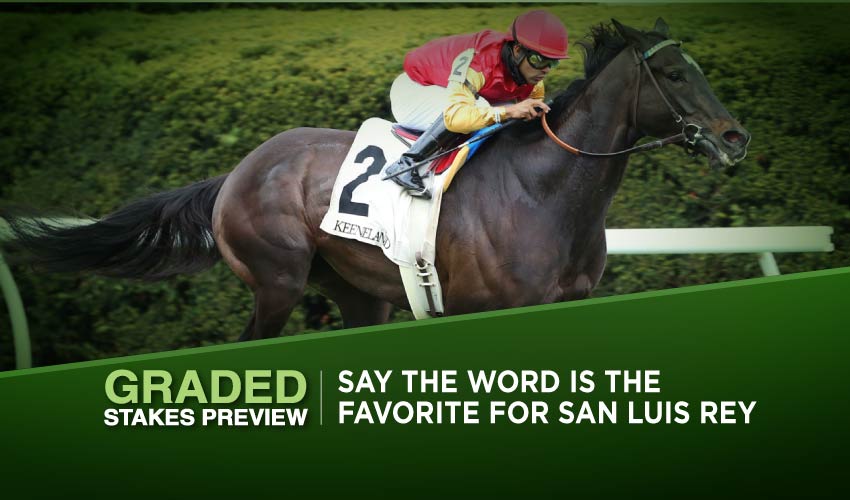 Contrasting options at Santa Anita over the weekend, with the G3 San Luis Rey Stakes over a mile and a half on Saturday – featuring old rivals and barnmates Say The Word and Acclimate – followed 24 hours later by the G3 Las Flores over six furlongs, in which last year’s Breeders’ Cup Filly and Mare Sprint runner-up Edgeway is the odds-on favorite.

A disappointing five-horse field for the Las Flores at Santa Anita on Sunday, so low-key that track officials moved it to the first race on the card to keep it out of the way.

It’s essentially a match, with only two horses in serious contention. The favourite is Edgeway, a very fast G3-winning mare who was runner-up in last year’s Breeders’ Cup Filly and Mare Sprint, and who made a successful start to 2022 in a stakes here over six and a half furlongs, leading all the way and coming clear to win by a length and three-quarters from Merneith, a G2 winner next time out.

All Edgeway’s six wins have come at six furlongs or six and a half, whereas Private Mission is better at around a mile, the territory of her victories in the G3 Torrey Pines and G2 Zenyatta last year. She ran herself to a standstill when tearing apart last year’s Breeders’ Cup Distaff, finishing last, and then ran well below par in the G1 La Brea here over seven furlongs last time out. She’s a miler sprinting against a sprinter, at an obvious disadvantage.

A straightforward scenario in which the classy miler Private Mission takes on the in-form sprinter EDGEWAY, who is expected to have too much speed for her main rival.

Old rivalries are renewed in the San Luis Rey, the feature event of Saturday’s action at Santa Anita, and trainer Phil D’Amato holds the aces with three of the leading contenders.

The stable-selected appears to be Say The Word , a talented and consistent route runner who met his barnmate and today’s second-string Acclimate in the G2 Hollywood Turf Cup at Del Mar in November, coming out on top by a length as they filled the exacta, with Award Winner just a half-length further back in fourth.

At the end of January Say The Word was again too strong for Acclimate when they were third and fifth in the G2 San Marcos here over ten furlongs, and the step back up in distance should help both horses. Their barnmate Red King seemed on the decline through 2021 and confirmed that impression when runner-up, beaten a length and three-quarters, to Current in a starter allowance here over ten furlongs last month.

Dicey Mo Chara has finished ahead of stakes debutant Offlee Naughty in their last two encounters, most recently in an allowance optional claimer here over a mile-eighth, and stretches out for the first time today. Henley’s Joy has lost 17 straight since winning the G1 Belmont Derby in June 2019, but may perk up on his first start for a new trainer.

A tight contest with overlapping formlines, in which last year’s narrowly beaten runner-up SAY THE WORD is the choice to go one better given his proven class and stamina.