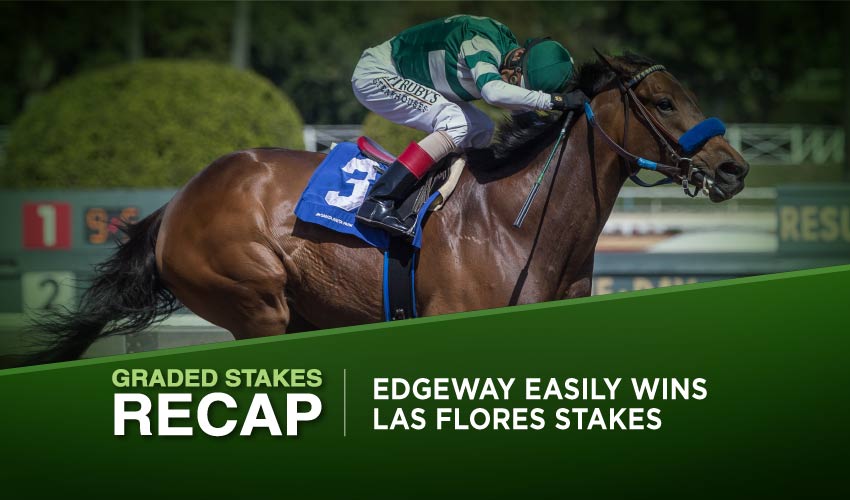 The spotlight at Santa Anita over the weekend shone on two star names, with the veteran Acclimate going gate-to-wire for a gutsy win in the G3 San Luis Rey on Saturday, backed up by Breeders’ Cup runner-up Edgeway barely breaking sweat when sprinting away with the G3 Las Flores Stakes the following afternoon.

It looked an easy task beforehand and Edgeway made it look very easy in the race itself, dominating a below-par renewal of the Las Flores at Santa Anita on Sunday.

With just four runners and two of them well overmatched, only Private Mission stood in the way of last year’s G1 Breeders’ Cup Filly and Mare Sprint runner-up, and she didn’t stand in the way for long. Private Mission led through the first quarter but Edgeway went by her without taking a deep breath and the race was over as a contest from that point.

The John Sadler-trained 2-5 favourite was simply too fast, drawing off to win by seven lengths in a time of 1:10 and one-fifth. Private Mission was untroubled to hold on to second spot, five lengths clear of Dynasty Of Her Own.

“Whatever I wanted to do, she was there when I asked her,” said winning rider John Velazquez. “When I called on her a little bit she was there instantly, and in the stretch I just kept her happy, it didn’t take much effort.”

The five-year-old Edgeway was taking her record to seven-for-11 with this stroll in the park, her third win in as many starts at Santa Anita. Long-term, another shot at the BC Filly and Mare Sprint, run this year at Keeneland, is at the top of the agenda.

Acclimate is right at home

The scratch of morning-line favourite Say The Word took the edge off the San Luis Rey at Santa Anita on Saturday, but not so much for his trainer Phil D’Amato, who won the turf marathon anyway with barnmate Acclimate.

The old man of the party, still punching hard at the age of eight, was bet down to even-money and hardly gave his supporters a moment’s concern. He led from the gate and was never headed, although he needed to dig in to turn back the sustained challenge of Dicey Mo Chara – half his age – in the stretch to score by a half-length, stopping the clock in 2:25 and two-fifths. Current was three and a half lengths back in third in a race in which the first three home were the first three throughout.

“That’s what he likes to do, go out there and be happy on the lead, so I just let him do it,” said jockey Ricardo Gonzalez. “As soon as he felt the runner-up on his hip he dug in and showed how big his heart is.”

According to D’Amato, the next big target for Acclimate is likely to be the G3 San Juan Capistrano back here in mid-June, a mile-and-three-quarter stamina test he won last year and in 2019.