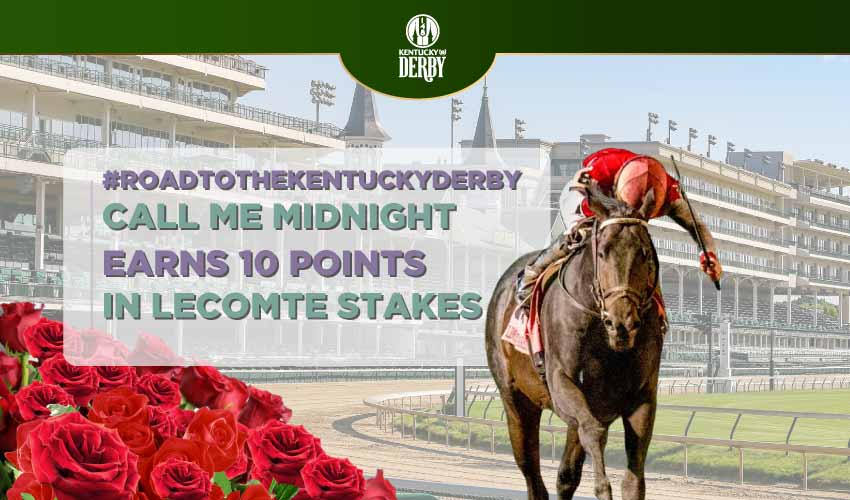 There was plenty to digest at the Fair Grounds on Saturday, with two close finishes providing food for thought for big races further down the line. The longshot Call Me Midnight laid down a marker for the Kentucky Derby with victory in the feature Lecomte Stakes, while Mandaloun has the Saudi Cup on his schedule after a battling win in the Louisiana.

The Road to the Kentucky Derby is full of twists and turns and also the occasional pothole, as exemplified by the upset victory of Call Me Midnight in the Lecomte at the Fair Grounds on Saturday.

The Keith Desormeaux-trained colt was discarded by bettors after finishing a well-beaten seventh in the Grade 2 Kentucky Jockey Club at Churchill Downs in November, but he belied his 28-1 odds with an irresistible stretch run to cut down the leading contenders and win by a head. The victory garnered him ten RTKD points.

As expected, second-choice Epicenter wasted no time in getting to the lead and set brisk fractions, while Call Me Midnight was ridden chilly and had only one horse behind him at the top of the lane, where 3-2 favourite Pappacap moved up on the rail to join battle with the leader. Epicenter put Pappacap away inside the final furlong, but Call Me Midnight was finishing off his race like an express train and shoved his nose in front right on the line, stopping the clock in 1:44 and two-fifths.

“Halfway down the backside I thought ‘I’m going to get a piece of this’,” said jockey James Graham. “He was getting to them so easy without me having to ask him, and when we turned for home, I wheeled him out and he flew. He might be the real deal, this one.”

The three principals – Pappacap dug in for third, three-quarters of a length back – may meet again in the Grade 2 Risen Star back at the Fair Grounds on February 19. The four RTKD points Epicenter earned for second place gives him 14 overall and leaves him joint-top of the standings alongside Pappacap, who picked up two points.

Two old rivals served up another thriller in the Louisiana, the highlight of the undercard, when odds-on favourite Mandaloun stretched his lead to 4-2 over Midnight Bourbon after a tooth-and-nail throwdown from the top of the stretch.

Perennial nearly-horse Midnight Bourbon adopted his habitual forcing tactics and had a two-length lead on the far turn, but 4-5 chance Mandaloun moved smoothly alongside under Florent Geroux as they straightened up and the pair slugged it out down the centre of the track.

Mandaloun took a slight advantage at the sixteenth pole and, although Midnight Bourbon wouldn’t quit, Geroux drove his willing mount out to win by three-quarters of a length. The time was 1:42 and one-half, almost two seconds faster than the Lecomte at the same distance. Warrant ground it out for third, more than eight lengths back.

“I think he can build off this and be a better horse this year,” trainer Brad Cox. “He’s more polished mentally, and physically he’s definitely better than he was last year.” Mandaloun, runner-up in last year’s Kentucky Derby and taking his record to six-for-nine with this win, is now under strong consideration for the Group 1 Saudi Cup, the richest race in the world, in Riyadh on February 26. So is Midnight Bourbon; the rivalry has a long way to go yet.

Follow us on Social Media for Lecomte Stakes updates!