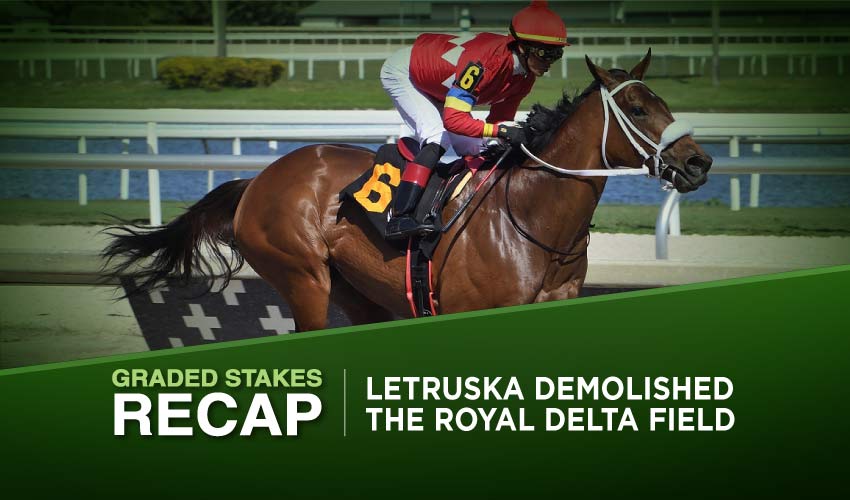 Letruska’s first start of the season 2022 was the obvious pinnacle of Saturday’s card at Gulfstream Park as the star mare was set to strike gold in the G3 Royal Delta.

She had to leave her below-par run at the Breeders’ Cup meeting behind her, which she did, and under Jose Ortiz, she willingly galloped towards an easy success in front of Into Vanishing. The favorite’s most serious rival, Crazy Beautiful, was no threat for her as she weakened even before turning for home.

The G3 dirt race ended up as expected – six-year-old Letruska (1-10) demolished the field of four-year-old fillies and older mares at the distance of a mile and a half of a furlong. In the past, the $150,000 event failed to attract participants of considerable stardom; however, the four-time G1 scorer Letruska definitely changed that in 2022.

The Fausto Gutierrez bound mare had a good start, charged for the lead right away, and subsequently didn’t allow anybody to get close. Galloping with ease and obviously feeling well, Letruska turned for home and, unopposed, aimed for her first victory in the new season. With Jose Ortiz aboard, she crossed the wire in 1m 43.43s, while the jockey didn’t ask her more when it was clear her rivals weren’t good enough to threaten her.

Therefore, Letruska’s advantage over a duo of rivals, fighting for the second place, Into Vanishing (32-1) – Il Malocchio (27-1) was just three lengths, even though she was undoubtedly in a league of her own here. So, after being disappointing in the Breeders’ Cup Distaff, where Letruska looked quite good throughout the race but faltered in the second turn to finish one but last, it seems the wonder mare is back and ready to snatch the crown for the best older mare in the US.

Her campaign should be less busy than in previous years; still, it’s entirely possible she’s about to improve her already impressive record of 18 victories out of 24 outings.

Surprisingly, four-year-old Into Vanishing ran in second as she tried to stalk the leader in the Royal Delta, and in the final stretch, she used the fact she carried less weight than Il Malocchio and managed to hold on the second place by ¾ of a length.

Third Il Malocchio sat in fourth place as Crazy Beautiful (23-5) galloped next to her, trying to maintain a good position to take on the favourite in the final stretch; however, she weakened prior to turning for home and finished fourth.

Follow us on Social Media for Royal Delta updates!