Life is Good dominates his rivals in the BC Dirt Mile 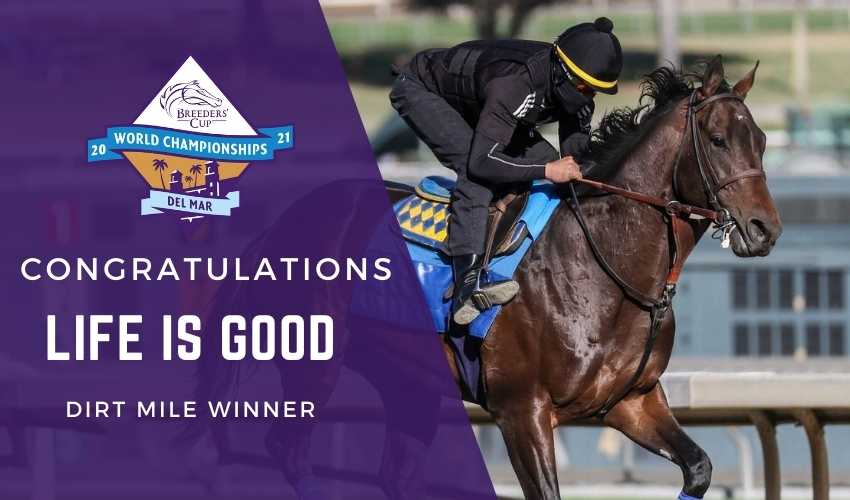 After a quarter of a mile, Larry Collmus called out the fraction, and a murmur lifted up from the grandstands into the clear blue California sky. It takes a lot to impress a horse-player, so Life Is Good must have been doing something right. He did something right all the way to the wire in the BC Dirt Mile, announcing himself as a star now and a star of the future.

Golden Pal went fast in the previous race, clocking 21.71 for his first quarter in the Turf Sprint. Life Is Good was almost as quick, posting his first quarter in 21.88, and he had three furlongs further to go. Cue the reaction from the grandstands. It might be expected that a horse travelling that fast over a mile would eventually slow down, but not Life Is Good. He kept going.

As they circled the turn Ginobili moved up to try to make things interesting, but Life Is Good put him away with disdain and drew right off, coasting home under a hand-ride from Irad Ortiz to score by six lengths.

Ginobili ran the race of his life to finish second, and Restrainedvengence came from another zipcode to take third, but Life Is Good had already galloped out by then. The clock showed 1:34 and change, and that was the only thing that could keep up with him. Trainer Todd Pletcher was posting his first success of the 2021 Breeders’ Cup weekend, and his 11th overall at the world championships.

The son of Into Mischief, who paid out at $3.40, had been favourite for the Kentucky Derby in the spring before injury derailed his bid for the Roses, and now he is busy making up for lost time, going five-for-six lifetime with the world at his feet.

Get a Daily Rebate and make sure to stay tuned for the latest hose racing odds, and racing entries.

Follow us on Social Media for instant BC Dirt Mile updates!