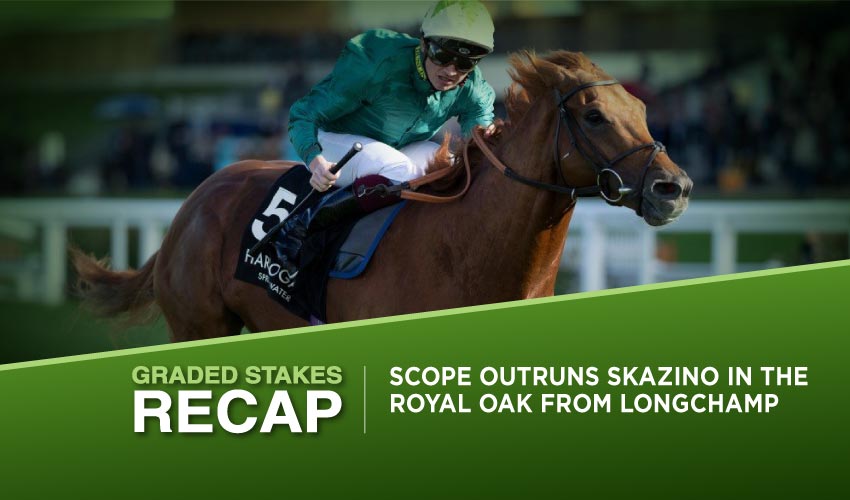 The last three G1 turf races of the French flat season were the weekend’s pinnacle, while a couple of prestigious events for two-year-olds were held at Saint-Cloud and the Prix Royal Oak for super stayers took place at Longchamp. On Saturday, Angel Bleu and El Bodegon got better than their junior rivals, and Sunday’s card saw a victory of three-year-old chestnut Scope. And so, the main part of the French flat season has been concluded with spectacular Longchamp Horse Racing Results.

On the very soft ground, six two-year-olds traveled the distance of a mile in this G1 turf event with the purse of €250.000; however, it didn’t bring redemption for talented Ancient Rome (6-5) as he once again couldn’t get the better of Angel Bleu (17-10).

The latter scored a win in the Prix Jean-Luc Lagardere after he bagged a G2 victory, while Ancient Rome finished third. Still, the slightly longer trip was supposed to help the former, yet the Ralph Beckett trained grey colt simply confirmed to be one of the best two-year-olds around. Galloping at rear of the field together with preferred Ancient Rome, he relaxed throughout the initial part of the race, upon which Frankie Dettori asked him some questions.

With enthusiasm, Angel Blue bolted forward, and despite a valiant effort, Ancient Rome put on, the son of Dark Angel achieved his second G1 triumph at Saint-Cloud in 1m 44.40s. Once again, proving his battling qualities and affinity towards the softer ground, Angel Bleu crossed the line ahead of Ancient Rome, who also showed a nice turn of the foot. Unlike his rival, he had to fight for enough space to actually rally forward. Still, Ancient Rome didn’t disappoint, finishing second, and looks like a promising three-year-old for his trainer Andre Fabre. A bay filly named Purpleplay (43-10) unfolded her finish at the outside, grabbing third place.

Aidan O’Brien’s charge Aikhal (12-1) didn’t show anything extraordinary at the fence when trying to close on the leading pair and had to settle for fourth place. Toimy Son (23-1) trailed to fifth place after setting the pace, while Oscula (11-1), a decent Grade performer, faced a serious shortage of space in the final stage, upon which he lost her position and finished last of all.

While the previous G1 turf race for two-year-olds didn’t see a surprising result, the other prestigious event for juniors was held at the distance of a mile and quarter, which proved to be too much for preferred Goldspur (7-5) in combination with the soft ground. In the end, it was El Bodegon (92-10) who absolutely thrived in this race with the purse of €250.000 as Ioritz Mendizabal let him show the way since the beginning and as the field arrived at the final stretch; nobody had enough left in the tank to challenge the boldly running leader.

The James Ferguson bound colt looked quite green when bagging a G3 race last time out. However, his Saturday’s performance was brilliant; thus, he seems to be a decent three-year-old stayer in the making. Goldspur, trained by Charlie Appleby, followed him closely throughout the race. However, when El Bodegon advance his lead in the final stretch, Goldspur had nothing to give.

He had handled the trip in his last outing, but he faced good ground back then, so at Saint-Cloud, he had utterly lost pace with El Bodegon, and his team had to settle for a narrow third place. He didn’t hold on the second even as Stone Age (10-1) trained by Aidan O’Brien enjoyed the surface this time and showed a fine effort in the final stage when charging forward from the midfield. El Bodegon crossed the wire in 2m 16.93s with one and half of a length advantage over Stone Age who suggested he could be an interesting three-year-old prospect as well.

Goldspur then led home the tight pack of five horses, while fourth Buckaroo (17-1) and fifth Unconquerable (47-10) were those who earned some money here, too.

This G1 Prix Royal Oak event unfolded in accordance with the surprises of European fall, and therefore, the winner of the €350.000 race was a bit unexpected yet understandable regarding Ralph Beckett’s stable form. His three-year-old charge Scope (76-10) easily won his last start at the Listed scene; however, he was about to meet more difficult competition over the very soft ground at Lonchamp.

Among three-year-old and older participants, Scope galloped close to the leader, showing the way over the distance of a mile and seven and half of a furlong, and under Rob Hornby, he remained in the third-place up into the final stretch. It took some time before Scope charged for the first place, but he was always there and always dangerous, so once favorite Skazino (41-10) rallied from the outside, Scope joined him. Soon enough, it was clear this duo would fight for the win; however, Scope proved to be a tough rival for the favorite, and in the end, the advantage in carried weight showed, helping Scope to win by a length in 3m 27.35s.

After taking fourth place among super stayers in the Prix du Cadran, five-year-old Skazino finished second here and confirmed Cedric Rossi’s horses to be in a fine form. Another five-year-old, Glycon (9-1), was running at the fence, and after a gallant effort, he grabbed third. His two Grade victories in August then correctly suggested he’s finally capable of showing off his class properly.

Although she prefers firmer ground, five-year-old Search For A Song (43-10) also ran a good race, given she struggled seriously in the Irish St Leger she won twice in the past. Last time out, she returned to the winning ways; however, she was way too far away from the front in the final stretch, turning for home in the last place. Still, she managed to take fourth place, sentencing Zero Ten (17-1) for fifth. Even for the victory considered couple Valia (69-10) – Kemari (56-10) were no match for the best on Sunday, finishing well-beaten in sixth and eighth in the Longchamp Horse Racing Results, respectively.