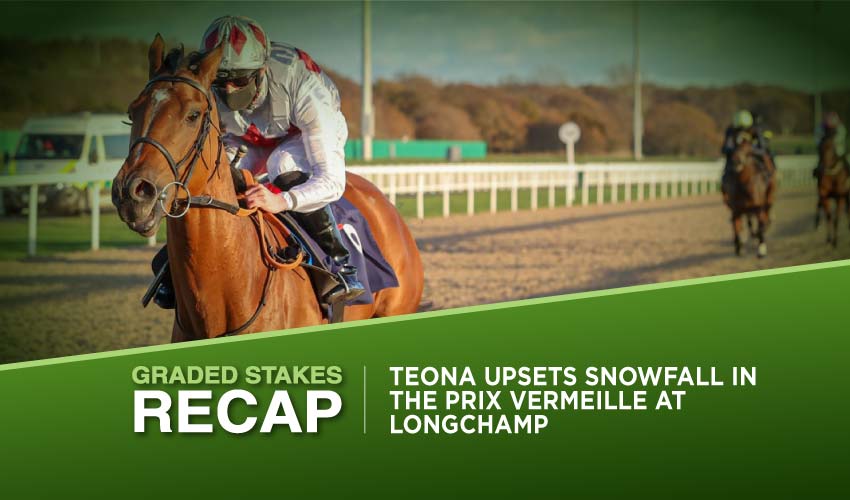 This past Sunday two of the most prestigious races took place in Longchamp, and Horse Racing Tote brings the Prix Vermeille & Prix Foy Recaps in case you miss them!

Although some of the results of prestigious European races this weekend were surprising, the most shocking one happened in the Prix Vermeille at a French track at Longchamp. During the afternoon packed with trials for the Prix de l’Arc de Triomphe, the G1 turf race open to three-year-old and older fillies and mares was the peak of the day with the purse of €600,000, where Snowfall (1-5) was expected to prolong her unbeaten record. However, Roger Varian’s underestimated bay Teona (179-10) strongly disagreed; causing a huge upset when winning over a mile and a half in 2m 31.99s.

Without a shadow of a doubt, Snowfall, trained by Aidan O’Brien, was the hot favorite. Unbeaten in her last three starts, she took our breaths away when demolishing the field of the Epsom Oaks, upon which she also succeeded in the Irish and Yorkshire Oaks. Already being the leading chance for the Prix de l’Arc de Triomphe, Snowfall’s team opted to try the three-year-old filly at France, where the peak of the French season will be held – Longchamp recap. As usual, the favorite was granted a pacesetter La Joconde (46-1); however, it’s debatable whether Hollied Doyle aboard did what was best for Snowfall or her own ride. In the end; the tempo wasn’t beneficial for the favorite, as Frankie Dettori later reported that Snowfall wasn’t feeling particularly good throughout the race. When he asked her to quicken up in the final stage, there was no enthusiasm about her as in the past races.

Back then, she would just rally forward effortlessly, but the Deep Impact bay’s attempt was cumbersome this time. She managed to move from the fifth position, where she spent the race, to third; but while trying to leave even the outsider La Joconde behind, Roger Varian’s Teona was already at the front.

The three-year-old British raider just couldn’t hold a candle to Snowfall in their two previous clashes, but she was pretty impressive at the Listed level when easily beating a solid stayer Desert Encounter last time out. Still, he’s a nine-year-old veteran, so the win wasn’t excessively valuable. Therefore, Teona was expected to run a good race, but to place as third at best. However, Olivier Peslier once again worked his magic; settled on the third place with his filly, and two furlongs from the finish; he pushed Teona alongside La Joconde. The daughter of Sea The Stars then left the leader behind and cruised for the win, unthreatened by anybody. The bay filly achieved the most significant victory of her career by one and half a length.

Snowfall simply couldn’t be better than second this time, beating her stable-mate La Joconde only by half a length. Bulgarita (10-1) was also close to the duo in fourth, while the last money came to Incarville (26-1). The winner of a French Classic Joan of Arc (10-1) closely followed the leader; however; the last couple of furlongs were too much for her, and the Aidan O’Brien’s filly crossed the wire in the last place, tired and probably yearning for shorter distances.

Among the older candidates for the Prix de l’Arc de Triomphe, Skalleti (7-5) was preferred to strike gold in this G2 turf race over a mile and a half. However, he wasn’t impressed by the good ground and wasn’t able to come up with any kind of an eye-catching finish as the six-year-old usually does. The race with the purse of €130,000 just didn’t see Skalleti on his better day but it sparked some hope in the Japanese horse racing fans; impatiently waiting for their winner of the treasured Arc.

Since Orfevre managed to bring home second place from France in 2013, Japan hasn’t sent a better horse to the most prestigious turf race in Europe, but it could be different in 2021. Besides their superstar mare Chrono Genesis, aiming at the Arc without a prep-run, Japan seems to have another exciting horse for the pinnacle – Deep Bond (17-2). The four-year-old bay trained by Ryuji Okubo arrived at Longchamp with some G2 successes and second place in G1 Tenno Sho (Spring) over two miles under his belt. Such a record rendered him a dangerous contender for the duo of European Prix Foy favorites; Skalleti and Aidan O’Brien bound Broome (23-10).

Still, there were doubts whether Deep Bond was good enough to run down even the rest of the field, yet the dark bay was under Cristiano Demuro just hugely impressive. Taking the lead from the start; the Kizuna colt traveled smoothly throughout the whole race, and once Broome tried to make a move and got closer to him, Deep Bond switched to another gear and drew clear from him again.

Of course, the classy and tough Broome kept trying under Frankie Dettori, but Deep Bond was way too good on Sunday, winning easily in 2m 31.82s. After the victory by a length and a half, Deep Bond earned a spot in the Arc picture; still, he will face even stronger competition here in October, including the top Godolphin duo Adayar – Hurricane Lane, Tarnawa, or Mishriff.

Japan has a fair chance to finally succeed in this race

The reliable Aidan O’Brien colt Broome ran another great race, and given it was his eighth outing of the season, moreover; without ever failing to place, he deserves some respect as well. As he stalked Deep Bond for the whole race, the duo basically didn’t allow any other participant to play an impactful role here, and third Iresine (56-10), fourth Skalleti, and fifth Sublimis (5-1) just couldn’t match the first two.

Join us at Jazzsports and make sure to stay tuned for the latest fixed horse betting odds. and racing entries.

Follow us on Social Media for instant Longchamp recap updates!