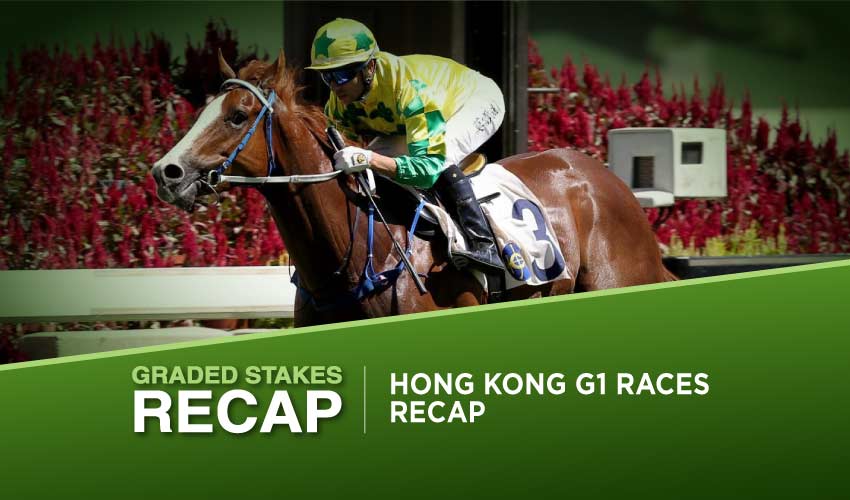 Longines Hong Kong International races 2021 resulted in two G1 victories for Japan and two for the locals. At first, Glory Vase scored the HK Vase for the second time, while Loves Only You concluded the exciting card with another Japanese success in the HK Cup. The locals seized the HK Mile thanks to superstar Golden Sixty and also took the eventful HK Sprint that Sky Field won after he was fortunate enough to escape the tragic collision in the final turn.

The first of the G1 turf races held at the Sha Tin racecourse was open to three-year-old and older horses who clashed at the distance of a mile and a half. The purse of 20,000,000 HKD attracted a field of eight participants, with two of them attempting to score the race for the second time. However, while Irish raider Mogul (51-10) showed nothing remarkable as he did throughout the whole season, Japanese stayer Glory Vase (17-20) left nobody in doubt he’s still capable of big things.

The six-year-old bay trained by Tomohito Ozeki won the HK Vase back in 2019, to which he added a second place in Hong Kong in April, and as it’s a fact Glory Vase enjoys the track at Sha Tin, he was expected to run well on Sunday.

And he did. The son of Deep Impact spent the race at the rear of the field, and once Pyledriver (7-2) charged for the lead from the third place, Joao Moreira aboard Glory Vase switched his mount to the outside and urged him to rally forward. At first, it seemed that Martin Dwyer decided the race for himself and the United Kingdom bound Pyledriver as he worked out a fine advantage over his rivals, still, Glory Vase’s turn of foot was simply too good even for Pyledriver.

The Japanese horse managed to catch the British one in time to score the HK Vase for the second time in 2m 27.07s, securing his homeland the first of two victories at this year’s meeting. Pyledriver proved he’s a high-class horse when fit and finished second, just a length behind the victor, with four-year-old filly Ebaiyra (12-1) taking third.

With Ebaiyra, the last chance for superstar French trainer Alain de Royer-Dupre to snatch his final G1 faded away as the legend is about to retire at the end of the year. The chestnut filly ran a great race, though, leaving surely behind the lacklustre Mogul in sixth.

The G1 turf sprint with the purse of 24,000,000 HKD found its winner in the local five-year-old gelding Sky Field (211-10) trained by Casper Fownes, who bagged his first G1 victory in this 6-furlong long race for three-year-old and older horses.

He powerfully charged for the lead in the final stretch, getting up right in time to win in 1m 8.66s by ¾ of a length and ensuring Resistencia (13-1) was just too far away to snatch the win as she had to settle for second place. The winning horse lead by Blake Shinn quickly headed also third Courier Wonder (7-2) and fourth Hot King Prawn (21-1), yet it’s fair to say the result came sort of inferior to the other thing that happened in the HK Sprint.

Nobody will probably hold this year’s HK Sprint dearly in their hearts as the collision, taking place right after turning for home, proved fatal for two participants. Arcing the turn wide, Amazing Star (204-1) unfortunately broke down due to a severally injured front leg, causing a huge collision to the horses following in his track. Naboo Attack (57-10) fell down as well, fatally injured, too, upon which Japanese Pixie Knight (22-5) collapsed over the laying horses, yet remained unscathed. Local participant, Lucky Patch (11-5), was pulled up but unharmed.

The HK Mile, a G1 turf race held at the distance of a mile, was expected to present the public with another superb performance of a local champion, Golden Sixty (30-100). The six-year-old gelding has won all of his starts with one exception, while on Sunday, the K W Lui bound bay was bidding for his 16th win in a row and second in the Hong Kong Mile, for which he was just a hot favourite. C Y Ho aboard led Golden Sixty at the back of the field of three-year-old and older horses, and once the contestants turned for home, he sent the favourite forward to snatch most of the purse of 26,000,000 HKD.

Golden Sixty once again showed off the brilliant turn of foot he possesses, sprinted by his rivals, and readily scored the race in 1m 33.86s, leaving another local participant, More Than This (43-1), behind by one and ¾ of a length. Japanese Salios (13-1) took third behind the absolute champ of Hong Kong, with Irish raider Mother Earth (44-1) finishing a gallant fourth.

The last of the Hong Kong International Races welcomed some G1 three-year-old and older horses which were about to cover the distance of a mile and a quarter on the turf surface. With the purse of 30,000,000 HKD up for grabs, five-year-old Japanese mare Loves Only You (8-5) was the leading chance here as she’s been fantastic among the elite any time she clashed with it; moreover, she scored the BC Filly and Mare Turf at Del Mar last time out. Yoshito Yahagi bound daughter of Deep Impact travelled to Hong Kong from the US; however, it didn’t influence her in a bad way as Loves Only You looked fresh and ready to go.

Piloted by Yuga Kawada, she settled in the midfield, and despite the fact she didn’t have much room in the final stretch, she managed to throng between her rivals in time to leave not only the local Russian Emperor (23-1) behind, but also hold off another Japanese horse, Hishi Iguazu (48-10). Loves Only You thus signed off her career with a super G1 victory by a short head in 2m 0.66s, leaving strongly going Hishi Iguazu in second and mentioned Russian Emperor, who charged for the lead at the beginning of the stretch, in third.

Dubai Honour (42-10), closing on the leading rivals in the final stage to seized fourth, was the best of the European raiders as neither Bolshoi Ballet (28-1) or Mac Swiney (43-1) liked the local track, while Japanese Lei Papale (26-5) ran another disappointing race in sixth. It wasn’t a bad effort of her, but she used to be perceived as a superstar in the making, which she hasn’t proved to be the case yet.