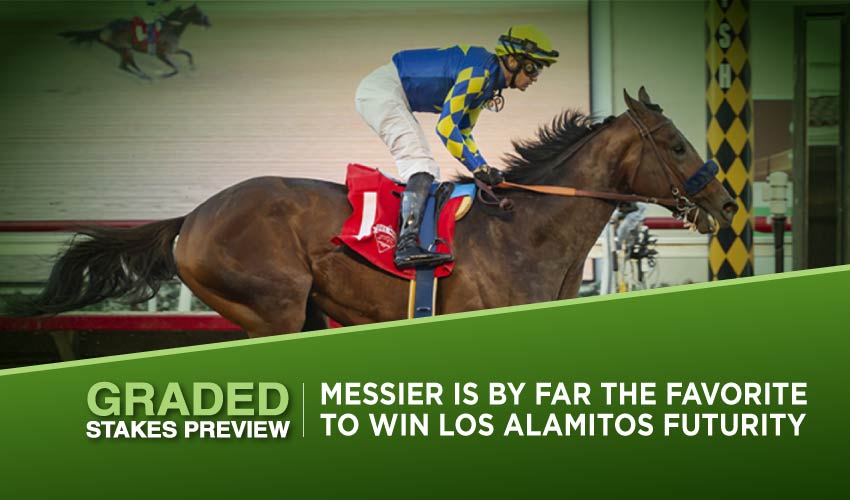 Kentucky Derby types go to the gate for Saturday’s west-coast feature Grade 2 Los Alamitos Futurity, although there will be no ‘Road’ points available should the heavy odds-on favourite Messier justify his market position, as his trainer Bob Baffert – a 14-time winner of this race – is barred from entering horses in the ‘Run for the Roses’.

December wouldn’t be December without Christmas and Bob Baffert winning the Los Alamitos Futurity, the feature of Saturday’s meeting at the south Los Angeles venue, and this year it looks pretty certain that we’ll get both.

The embattled master trainer puts two in the gate as he bids for his eighth consecutive victory in the race – not including the six he racked up when the Los Alamitos Futurity was run at Hollywood Park before 2014 – and one of them is the overwhelming favourite Messier (1-2), who would be one of the leading contenders for the Kentucky Derby were it not for Baffert’s suspension from Churchill Downs.

The son of Empire Maker is two-for-three, and backed up his cantering win in a Santa Anita maiden when a dominant winner of the Grade 3 Bob Hope at Del Mar over seven furlongs, storming home unextended by three and a half lengths. Messier got the job done in a fast time and although he had only three rivals, two of them barnmates, it’s impossible to quibble at his performance.

The extra furlong and a half today is unlikely to be an issue and he has extensive experience of the track, having made his debut here and worked several times over the circuit.

His stablemate Barossa (5-1) has had more experience but done less with it, taking three races to break his maiden, doing so when getting home by a half-length over a mile at Santa Anita, and then disappearing into the background after being prominent early when ninth behind another stablemate Corniche in the Breeders’ Cup Juvenile. Barossa should go well, but he seems a fair way behind Messier in the barn pecking order.

When Barossa won that maiden he had Durante (9-2) half a length behind in the runner-up spot, with the pair well clear of the third horse. Durante then went on to shed his maiden tag at the third attempt when scrambling home in a blanket finish last time out, prevailing by a half-length at odds-on over a mile at Del Mar.

He is the nominal first choice of two runners for trainer Doug O’Neill, the other being Slow Down Andy (5-1), who is one-for-two after winning a Santa Anita sprint maiden on debut and then finishing second, beaten a half-length, in a Del Mar stakes race over seven furlongs. He stretches out today, which may bring a step forward.

The longshot of this quintet is Olympic Legend (15-1), who is the only horse to beat Messier, which he did on his second start – Messier’s debut – at this track over five furlongs. Since then Olympic Legend has been an outclassed last of six in the Grade 1 Del Mar Futurity and a well-beaten third in a stakes here over six and a half furlongs; he looks well out of his depth.

Messier is by far the most likely winner of the Los Alamitos Futurity, but his odds are prohibitive and a wager on barnmate BAROSSA to show may be a more sensible option.