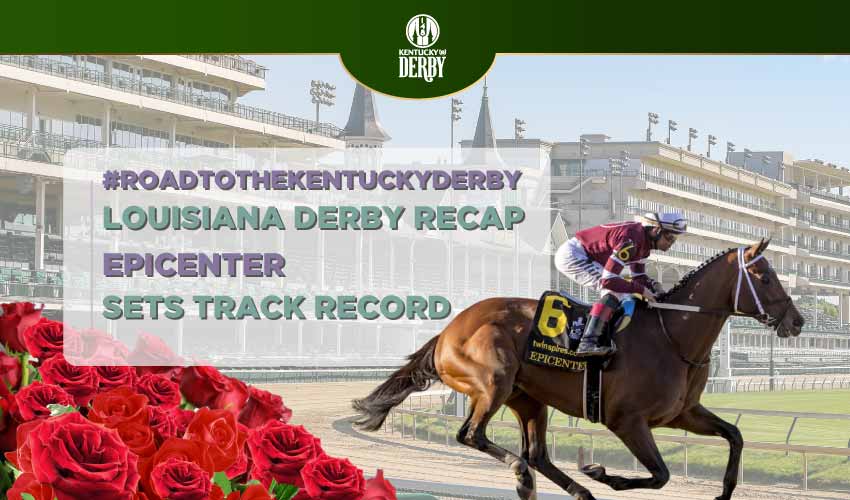 Steve Asmussen and Joel Rosario were the men to be with at the Fair Grounds on Saturday, as they teamed up for five wins including the two features. Epicenter ran himself into favoritism for the Kentucky Derby with a dominant victory, below the Louisiana Derby Recap, while last year’s champion juvenile filly Echo Zulu maintained her unbeaten record with an all-out win in the G2 Fair Grounds Oaks.

The countdown to the Kentucky Derby started in earnest at the Fair Grounds on Saturday, when the progressive Epicenter was made favorite for the first leg of the Triple Crown following his authoritative victory in track-record time in the Louisiana Derby, the main event at the New Orleans circuit.

Joel Rosario tucked the even-money favorite in on the rail behind the pace-setting Zozos until making his move at the top of the stretch, and Epicenter went to the lead without Rosario moving a muscle. He quickly went clear and, despite drifting back towards the rail, kept on strongly to win by two and a half lengths, stopping the clock in 1:54.38, more than half a second faster than the old record.

Zozos dug in for the silver medal and 40 RTKD points, which may well be enough to qualify for the Derby, finishing two lengths ahead of Pioneer Of Medina in a race in which the first three home were the first three all the way around. One-time major Derby fancy Rattle N Roll was beaten eight lengths into fourth.

Epicenter, a son of Not This Time, was already assured of a place in the gate at Churchill Downs but gave notice that he will be one of the big players on the big day with this dominant display, in the process proving that he is no one-dimensional front-runner.

“Not only is he a nice horse, but he also tries very hard,” said Rosario. “He was off the pace today and inside horses. It seems like he can be special. The way he did it today, the mile and a quarter shouldn’t be a problem.”

Epicenter was adding to his last-time-out score in the G2 Risen Star, taking his lifetime record to four-for-six and delighting trainer Steve Asmussen, who joined Rosario in signing for five wins on a stellar afternoon. “This gives us a tremendous amount of confidence going into the Kentucky Derby,” he said. “I’m as happy as I could be.”

Asmussen and Rosario struck again in the highlight of the undercard, the Fair Grounds Oaks, when last year’s champion juvenile filly Echo Zulu extended her unbeaten record to five with a determined display on her first start of the year.

The daughter of Gun Runner was an unbackable 1-9 shot but had to show a hitherto unannounced tenacity to go with her proven brilliance, leading at every call as usual and sticking on bravely to turn back the persistent challenge of Hidden Connection and win by a nose. She covered the distance in 1:42 and three-fifths, only half a second outside the track record. Favor claimed third spot, two and a quarter lengths further back.

“She’s a worthy champion and just a blessing to be around,” said Asmussen. “I’m a little emotional because of how wonderful it is to be a part of it. I can’t tell you how proud I am. She’s a racehorse.”

She certainly is. Echo Zulu is already a three-time G1 winner – Breeders’ Cup Juvenile Fillies, Frizette, and Spinaway – and stamped her passport to the Kentucky Oaks with this success, the 100 RTKO points she earned sending her to the top of the standings. Hidden Connection and fourth-placed Turnerloose are among the top four in the RTKO list and are also assured of a place in the gate.

The epitome of a horse going from strength to strength, Olympiad took his winning streak to three in the New Orleans Classic and gave notice that he could go all the way to the top of the ladder.

On a day when it paid to be near the pace, the 3-5 favorite pressed the fractions of Promise Keeper until Junior Alvarado sent him to the lead at the quarter-pole, and Olympiad was never in danger thereafter, rolling on to win by two lengths from the late-running Proxy, with Promise Keeper hanging on to third spot, two and three-quarter lengths back. The time was a speedy 1:47.74, just 0.1 sec outside the track best.

“Today was a new test at a mile-eighth and he’s answered all the questions,” said trainer Bill Mott. “We won a Grade 3 last time and a Grade 2 this time – we’d love to get a Grade 1 in him.”
Olympiad, a four-year-old son of Speightstown, is now five-for-eight, with the only reverse in his last five starts being a fourth-place in the G1 Cigar Mile at Aqueduct in December.

James Graham had him out of the gate fast and that was the ballgame; the 5-1 fourth-choice quickened four lengths clear in mid-stretch and was under no pressure in the closing stages, hitting the wire two and a half lengths clear of the favorite Santin, who followed the winner around the track without ever landing a glove. Cavalry Charge, third throughout in a race that only involved the pace horses, was three-quarters of a length further back. The clock showed 1:49 and four-fifths.

“I knew it was over when he got into the turn because he’ll run all day if they let him gallop along,” said trainer Hugh Robertson. “He’s been getting better every year and I think he’ll keep going.”

Two Emmys has only been off the board twice in his last 11 starts and enjoyed his finest hour when an upset winner of the G1 Mr D at Arlington last summer. The next stop could be the G2 Elkhorn over a mile and a half at Keeneland on April 23.