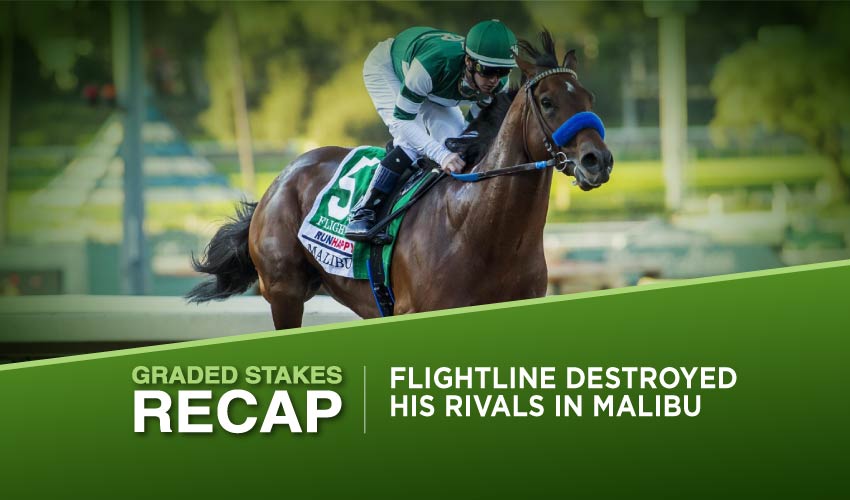 Santa Anita on Sunday was all about the mighty Flightline, who produced a sensational performance to win the Grade 1 Malibu and confirm himself the most exciting horse in the US. The unbeaten colt’s dazzling display completely outshone the victories of Kalypso (La Brea) and Express Train (San Antonio).

Everyone in the sport was reaching for superlatives after the Malibu at Santa Anita on Sunday, in which the astonishing Flightline destroyed his rivals and announced himself as US racing’s new superstar.

The Tapit colt, making his first start in stakes company, was 2-5 favourite to extend his unbeaten record to three but no-one could have expected him to do it in such a fashion. Flightline led at every call, but that’s incidental, as is the news that Baby Yoda was runner-up, a length ahead of Stilleto Boy, and the well-fancied Grade 1-winning sprinter Dr Schivel was last of seven.

What really matters is Flightline’s winning margin of 11 and a half lengths, his time of 1:21 and two-fifths (more than three seconds faster than the La Brea over the same distance) and his speed figures, 127 on Equibase and a Beyer of 118, both year-best returns. Flightline really is the next big thing.

“He is so brilliant. This is not an ordinary horse, this is a very special horse,” said trainer John Sadler. Jockey Flavien Prat, who never moved a muscle, told us how it felt to ride the lightning. “I was in cruise control the whole race,” he said, hardly able to believe what had just happened.

Flightline was purchased for $1 million at the Saratoga yearling sales, an investment that is already a bargain. He has won his three races by an aggregate of 37 and a half lengths, and the only disappointing aspect is that we won’t see him again until the Metropolitan Handicap (Met Mile) at Belmont Park in early June.

“He can do it all, but one step at a time,” said Sadler, as Flightline takes giant leaps for horse-kind.

Kalypso is on song

There was no rustiness as Kalypso came back from an eight-month layoff to dominate the La Brea, strolling home to post her first Grade 1 win by four and three-quarter lengths.

The 8-1 fourth-choice sat third as Livingmybestlife laid down the fractions, took control on the turn and drew off through the stretch to give jockey John Velazquez his fourth winner of the day and trainer Bob Baffert his third, stopping the clock in 1:24 and four-fifths. Brilliant Cut was runner-up, a length and a half ahead of Livingmybestlife; odds-on favourite Private Mission, barnmate of the winner, was a never-in-it sixth of seven.

“I kind of got on her a little bit at the three-eighths pole and she bit into the bridle,” said Velazquez. “At the quarter pole I pulled her to the clear and from there it was pretty easy.”

Lock bettors suffered a low blow when 1-5 chance Hot Rod Charlie was caught in the last jump of the San Antonio and beaten a nose by the John Shirreffs-trained Express Train, for whom this was a third Grade 2 win of a very solid year.

Long-time leader Eight Rings and Hot Rod Charlie fought their way head-for-head down the stretch, and just when ‘Chuck’ had finally put his tenacious rival away, the 7-1 third-choice Express Train came down the outside to nail him at the wire, stopping the clock in 1:44 and four-fifths. Eight Rings was a half-length away third.

“Sometimes things go the way we calculate turning for home, and sometimes they don’t,” said winning rider Victor Espinoza. “Today it worked out and we got it right at the wire.”

Make sure to stay tuned for the latest Horse racing odds, racing entries and Races results. Sign up and get a 10% rebate.

Follow us on Social Media for instant Santa Anita updates!