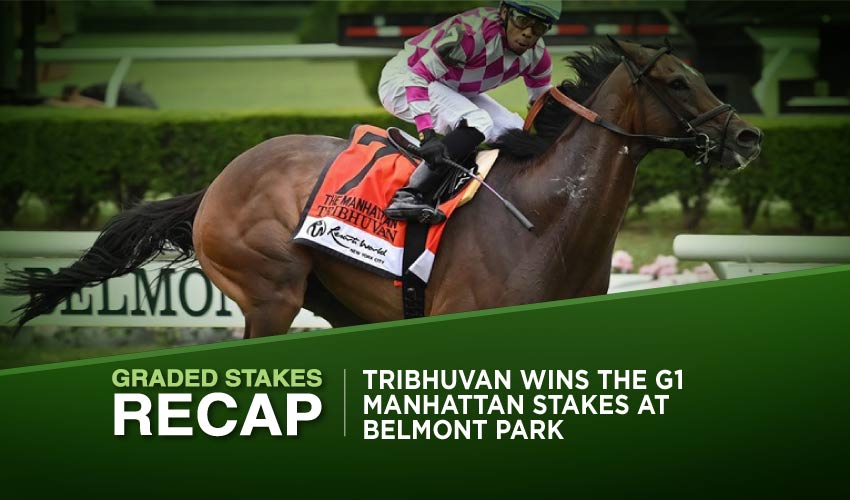 The glittering, G1-loaded undercard at Belmont Park on Saturday showcased a personal triumph for trainer Chad Brown, who landed a G1 treble headed by the show-stopping performance of three-year-old star Jack Christopher in the Woody Stephens. He was backed up by in-form mare Regal Glory, who ran out a comfortable winner of the Just A Game, and longshot Tribhuvan, who led at every call for a dominant success in the Manhattan Stakes.

Tribhuvan trips them all up | G1, $750,000, 1m 2f turf, 4yo+
On a bonanza day at Belmont Park for trainer Chad Brown, who welcomed home three G1 winners on Saturday, it was his longshot from a four-strong entry who hit the target in the Manhattan Stakes as Tribhuvan wrapped the race and his rivals around his little finger.

The six-year-old gelding led every step of the way to pull off a 19-1 upset, surging seven lengths clear at the top of the stretch and keeping on strongly as the posse closed in, hitting the wire three and a half lengths clear of his late-running barn mate Adhamo, the third-choice of the field and the shortest odds of Brown’s quartet. The favorite Gufo rallied late for third; the clock showed 1:59 and one-half.

“I knew I was the only speed in the race,” said jockey Manny Franco. “I was really comfortable with the way we were traveling, and it felt great that I didn’t see anybody behind me.”

This was the second G1 score of Tribhuvan’s quirky career, which has also embraced seventh place in the Swedish Derby. The French-bred had been well beaten in three starts since taking down the G1 United Nations at Monmouth Park last July, hence his inflated odds, although those who supported him will have recalled that he finished runner-up in the Manhattan 12 months ago as part of yet another Chad Brown exacta.

“The key was that he opened up,” said Brown, winning his eighth Manhattan, a record, and his fourth straight. “That’s what you gotta do with this horse. You just have to bottom the other horses out. At the half-mile pole, I was yelling from the box seats ‘Open up!’”

The next stop for Tribhuvan, who became a millionaire with his share of the purse, is likely to be a defense of his title in the United Nations over a mile and three-eighths on July 23.

Yet more Glory for Brown | G1, $500,000, 1m turf, 4yo+ fillies/mares
Chad Brown had begun his G1 haul in the short-field Just A Game, firing three bullets at the target and hitting the bullseye with the amazing Regal Glory, who is in the form of her life at the age of six.

The 7-5 second-choice reaped the benefit of a whirlwind pace set by west-coast raider Leggs Galore, who towed the field through a half-mile in 45.53 and predictably dropped right away to finish last. Regal Glory, patiently ridden by Jose Ortiz, moved smoothly through to pick up the pieces at the top of the lane and cleared away to win by three and a half lengths from longshot Wakanaka, stopping the clock in 1:32 flat.

The winner’s barn mate In Italian did well to hang on for third, a length and a quarter further back, after being closest to that fierce pace, but Brown’s other runner, the favorite Speak Of The Devil, was slow at the gate and never showed.

“She’s just got older, smarter, and stronger,” said Ortiz, offering proof that there are indeed benefits to the aging process. The race was a personal triumph for owner Peter Brant, who campaigned 1980 champion turf distaffer Just A Game and was extra-thrilled to win the race named in her honor.

“She was a great mare and to have a race named for her was a great pleasure,” said Brant. “Now to win it, finally, is very, very special indeed.”

This was the third G1 victory for Regal Glory in the last seven months, following her triumphs in the Matriarch at Del Mar and the Jenny Wiley at Keeneland, and her earnings now exceed $2 million on a lifetime record of 12-for-19. Her next target is the G1 Fourstardave at Saratoga, over a mile against males on August 13.

Jack is a true ace | G1, $400,000, 7f, 3yo
By far the most impressive of Brown’s trio of G1 winners on Saturday was the outstanding Jack Christopher, who extended his unbeaten record to four with a demolition job in the Woody Stephens.

In a jaw-dropping exhibition of pace and power, Jack Christopher was kind enough to let longshot Provocateur lead him as far as the top of the lane, whereupon the 1-5 favorite cruised to the front and opened right up in just a few strides, barrelling clear to win by ten lengths under a hand-ride from Jose Ortiz in a time of 1:21 and one-fifth. Pappacap was runner-up, a length and three-quarters ahead of Provocateur, but this was truly a one-horse race.

Jack Christopher, winner of the G1 Champagne here last fall, had his entry into the big time delayed by a leg injury that kept him out of the Breeders’ Cup Juvenile and off the Triple Crown trail, but he has made up for lost time with remarkable efficiency and has strong claims to be regarded as the nation’s leading three-year-old colt. His four victories have been gained by an aggregate of 25 and a quarter lengths.

“This horse is an exceptional talent,” said an effusive Brown. “I’ve never had a dirt horse with this much pure brilliance. He has an abundance of raw talent allied to the ability to switch off – he’s not hard on himself. He’s just a tremendous horse who could probably run any distance.”

The son of Munnings will now get the chance to live up to that prediction, with his next objective confirmed as the $1m G1 Haskell over a mile-eighth at Monmouth Park on July 23.

Stay tuned for the latest Breeders Cup Odds. Check out the World’s major Racetrack entries and don’t forget to Sign-up and get up to a 10% horse rebate. We offer the best promotions

Follow us on Social Media for Manhattan Stakes and Tribhuvan updates!